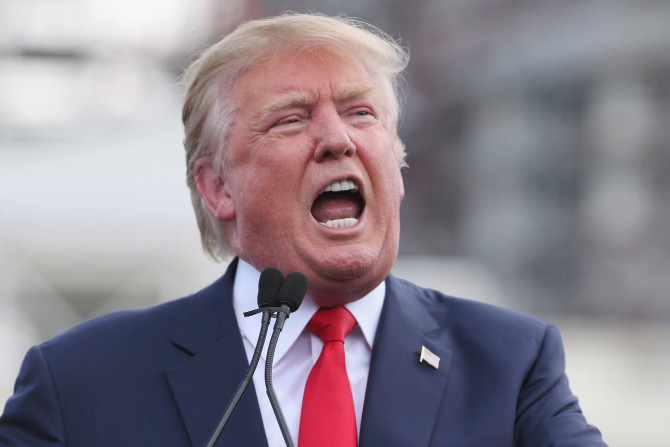 We know that President-elect Trump is a racist—or, at the very least, racist-adjacent. Like no other before him, Trump won the 2016 presidential election because much of white America underestimated the level of white supremacy on which this country was founded.

It is this supremacy that allowed Trump to claim that he didn’t know David Duke, American white nationalist and former imperial wizard of the Ku Klux Klan, despite evidence to the contrary. And it is this same racism that permitted Trump to go weeks without denouncing the former leader of the terroristic KKK, who had endorsed him to be this country’s next president. Like America, Trump’s candidacy survived off racism, both theoretically and practically.

But believe it or not, this hasn’t been the most terrifying moment emanating from Trump’s campaign and eventual win. So, from disparaging Mexicans to highlighting black crime to dismissing white violence against black lives, we ask: What are the 10 most racist things Trump has done so far?

1. Trump nominated Sen. Jeff Sessions to be the next U.S. attorney general.

For the past eight years, the U.S. attorney general—the head of the U.S. Department of Justice—has been a black person. In 2008, President Barack Obama nominated Eric Holder, who was approved by Senate confirmation in 2009, to the esteemed position. Then, six years later, in 2014, Obama nominated Loretta Lynch to become the first black woman to head the DOJ. This year, Trump’s nomination of Sen. Jeff Sessions (R-Ala.) proved just how racist the Trump-Pence administration will be.

If confirmed, Sessions will push for many right-wing policies that harm black people, including crime, drugs, terrorism and immigration. Unlike Holder and Lynch, Sessions could drastically lessen civil rights programs and change police accountability to be more pro-law enforcement.

Racism and Sessions have gone together his entire professional career. During Sessions’ 1986 confirmation hearings for a federal judgeship, the Republican-controlled Senate rejected him amid allegations that he had called a black attorney “boy” and suggested that a white attorney working for black clients was a race traitor. In other words, his own friends determined that he couldn’t be a federal judge because he was too racist to serve.

But now, 30 years later, we will sit through another confirmation hearing of a racist white man, this time picked to replace a black woman to run a department with a civil rights division.

As American as apple pie.

2. Trump referred to Mexicans as “rapists” and “criminals.”

Trump has flip-flopped on many issues over the years, but his ability to offend members of the Latino community remains consistent.

It’s terrifying that Trump—a man who is confident in his statements, no matter how untrue they are—was assertive in all these beliefs about Mexicans besides them being “good people.”

And, if this weren’t bad enough, Trump is on record for making comments about federal Judge Gonzalo Curiel, who presided over the “fraudulent scheme” Trump University case. Trump implied that Curiel was too biased and “hostile” against him because of his Hispanic background.

That’s par for the course.

Black people understand the historical infatuation that white people have with black bodies. Trump is certainly no exception. At a campaign rally this summer, while Trump was addressing a supporter and how well he was doing in the black community, Trump said, “Look at my African American over here.” Individuals supporting Trump rarely receive any sympathy from me, but there is still recognition that the words “my African American” imply an eerie ownership over black life—a belief, black people have become accustomed to understanding, that is held subconsciously by many white people.

4. According to Trump, black protesters should be assaulted.

In November 2015, Trump indicated that a black protester, Mercutio Southall Jr., who interrupted his rally was “so obnoxious and so loud” that “maybe he should have been roughed up.” A CNN video shows Southall being pushed to the ground and surrounded by several white men who begin kicking and punching him. In addition to saying that Southall should have been roughed up, Trump also noted that his supporters should throw him out.

It’s hard not to believe that Trump isn’t racist, or racist-adjacent, when he personally believes that the mere act of interrupting his speech deserves an assault by his racist white supporters.

When discussing his disappointment with President Obama’s response to the Baltimore riots after the killing of 25-year-old Freddie Gray, Trump took to Twitter to express his thoughts: “Our great African-American President hasn’t exactly had a positive impact on the thugs who are so happily and openly destroying Baltimore.” I, too, have issues with the way Obama responds to the black community, but it’s also clear that Trump’s racist rhetoric won’t save black people, either.

Not only did white nationalists love Trump, but he loved them back. Throughout his campaign, Trump accepted donations from racist white people, including Michael Polignano and Peter Brimelow, both of whom manage racist publications. White nationalists learned to love Trump because of the very issues on which he campaigned: anti-immigrant policies, Islamophobia, anti-blackness and sexism. That love is part of what took his campaign several times to denounce receiving support from organizations like the KKK.

7. Trump named a white nationalist as his chief strategist.

Trump has appointed openly racist people throughout his entire campaign, so this shouldn’t come as a surprise. And yet it does.

8. Trump believes in the complete shutdown of Muslims, from registry to banning their entry into the U.S.

Trump and his transition team, namely Frank Gaffney, have taken Islamophobia to new heights. Ever since his campaign’s inception, Trump has indicated that a “total and complete shutdown” of Muslims entering into the U.S. was a necessity for this country’s safety. Trump further suggested that there should be systems beyond databases that will track Muslims in America.

Perhaps Kanye West will get his chance to design his internment-camp couture after all.

9. Trump wants black people to know, “What the hell do you have to lose?”

Let Trump tell it, we black people wake our uneducated selves up every morning and walk to the corner store dodging bullets while seeking an abortion at nine months. In Trump’s mind, this racial trope is a reality for the majority of black people. So it’s no surprise that Trump believes we should have voted for him because “What the hell do you have to lose?” In a rally, Trump said, “We have to help them.” The infamous “them” was black people who are apparently misguided, violent and hopeless. For months, Trump used this rhetoric as an appeal to black people to elect him over Democratic candidate Hillary Clinton. And he won.

That says more about our country than many of us may realize.

10. Trump believes that black people live only in Chicago.

Anyone notice that when Trump speaks about black people, it seems that all of us live in Chicago? It’s no surprise, then, that Trump isn’t familiar with factual information because he’s known for existing in his own reality. But it does lead to questions: With the continual violence between police and black communities in and out of Chicago, why would Trump advocate stop and frisk as the standard, and why does he believe black people live only in Chicago?

Trump is infatuated with citing statistics about intraracial violence, but never even visits the same place he mentions as “war-torn.” And we all know why.

It’s clear that Trump doesn’t care about black people. And although some of them allow him to use them for personal gain, most of us know better. It’s unfortunate that Trump was elected president, but we have four years to push back on the horrid policies that are undoubtedly to come.

Originally posted at The Root