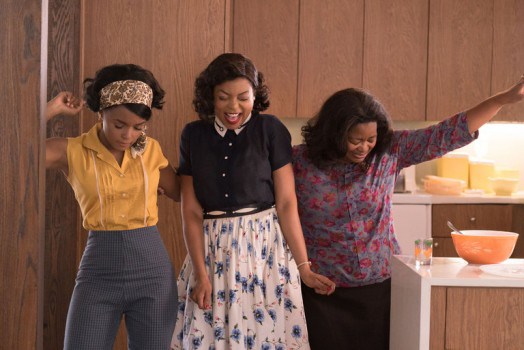 Katherine Johnson (Goble), Mary Jackson, and Dorothy Vaughan are three examples of many untold stories of those forgotten and in the background whose work have contributed to major accomplishments or innovations. Without the work of these three African American women, the story of America getting to the moon probably would have gone quite differently. Hidden Figures pays homage to this and to the story of these women, the women they worked with (the “computers who wore skirts”), and those like them.

I could get into the background of each of these women and why they deserved their own film but I do not want to take that away from your viewing experience so no spoilers in this review.

So, what am I writing about? This will be a little bit of a different review than my others as I will not be analyzing the cinematography, acting, score or anything else technical as that was all spot on. I am writing to share the lessons and reminders I took away from this film as there were quite a few.

Lesson one: Our education system in America is very limited
In some cases our history lessons were even a flat out lie or fairytale regarding historical facts and occurrences. Let’s take Columbus Day for example. If you are on any form of social media, then you may have noticed that in recent years many are protesting the idea of this being a holiday at all. In case you do not know why this is let me share. Christopher Columbus did not “discover” America. Don’t worry, I too was fed this fairy tale of a story in all of my Social Studies courses while the truth of the matter is that Christopher Columbus violently STOLE America from the indigenous people who are now once again fighting for the land and resources that rightfully belong to them. Take note of the word indigenous or to mean originating in a particular place or native. This is just one example of the injustice I feel I was served in the “history” books forced upon me in class. I was never taught in my schools of women, or men for that matter, such as the three incredible forces to be reckoned with in Hidden Figures. My books did not speak of Claudette Colvin[note]the 1st black woman to not give up her bus seat[/note], Henrietta Lacks[note]is best known as the source of cells that form the HeLa line, used extensively in medical research since the 1950s[/note], Ida B. Wells-Barnett[note]NAACP founding member, journalist and activist who led an anti-lynching crusade in the United States in the 1890s[/note], Bayard Rustin[note]key adviser to Martin Luther King Jr. and civil and human rights leader[/note], Frederick Douglass[note]author, orator, and human rights leader in the anti-slavery movement and the first African-American citizen to hold a high U.S. government rank[/note], Shirley Chisolm[note]the first African-American congresswoman in 1968 and the first major-party black candidate to make a bid for the U.S. presidency[/note], and so many more. Instead during Black History Month, the shortest month of the year, I learned of Rosa Parks, Martin Luther King Jr., Malcolm X, and Harriet Tubman (she only made the cut sometimes). That’s it. The rest of my year in history class was learning the inner workings of our judicial system, all of the presidents, the different time periods of Earth, and how “In August 1492, Columbus sailed the ocean blue.” Do not mistake my statements to mean that this should not be taught but can we begin to not segregate the studies of people and times as if the history books had to abide by Jim Crow laws? Can we include curriculum on the Civil Rights Movement, Women’s Suffrage, International civil and human rights struggles

Lesson 2: #BlackGirlMagic has existed for a long time!
“I say ‘magic’ because it’s something that people don’t always understand…Sometimes our accomplishments might seem to come out of thin air, because a lot of times, the only people supporting us are other black women.” This is a quote from a Times interview with CaShawn Thompson, originator of the hashtag #BlackGirlsAreMagic now #BlackGirlMagic. Hidden Figures is a showcase of the ‘magic’ described in this statement by Thompson. Before the phrase existed, there were women, like the three showcased in this movie, who exemplified the statement by not allowing anything to stop them from accomplishing their goals and dreams or helping others accomplish theirs. Watching each of the women doing their part and accomplishing things no one else could or knew how to do was exhilarating to say the least. Not to mention the support these women had for one another and the women they worked with was impressive but should be the norm as well. Women must support each other. Period. So much is accomplished when we, especially minority women, support one another.

You see women come together and support each other…when you embrace each other and you stick together, look what these women were able to accomplish…Women got to understand, we work better together.

Lesson 3: We still have a long way to go.
Iceland has been ranked as the number one best place for women to live (the United States is 23rd if you’re curious). Yet on October 24th, 1975, 90% of the women in the country took the day off. It’s known there as “Women’s Day Off” and describes the day women “instead of going to the office, doing housework or childcare they took to the streets in their thousands to rally for equal rights with men.”[note]http://www.bbc.com/news/magazine-34602822[/note] On October 24th, 2016, the women again protested, for equal pay this time, by walking out on their jobs at 2:38 pm. The specific time was chosen because for most women that is when they had earned the pay they were getting which equates to 14-18% less than their male counterparts.[note]http://www.independent.co.uk/news/world/europe/iceland-women-protest-strike-gender-pay-gap-leave-work-early-a7378801.html[/note]
Women receive $0.78 of the $1.00 male counterparts receive. Black women receive $0.64 of that $1.00 and Latino women only $0.56.[note]http://money.cnn.com/2015/04/13/news/economy/equal-pay-day-2015/[/note] Misogyny and racism still play major roles in opportunities and pay received by many. Every day I see a new video or hear of a new story of our alleged “post-racial” society. Some days I experience it first hand and don’t require second hand knowledge of stories. From the unjustified and unpunished deaths of unarmed black men and women to Native Americans fighting the DAPL[note]http://www.theatlantic.com/technology/archive/2016/09/dapl-dakota-sitting-rock-sioux/499178/[/note] to a Latino woman being told she is nothing in a store and to return to where she came from.[note]https://www.youtube.com/watch?v=9fgwilAkTPo[/note] Truth be told, only the indigenous people of this country have the right to tell us ALL to return to where we came from as we are all immigrants in this land and on their property.[note]https://www.britannica.com/topic/Native-American[/note]

Lesson 4: Non-minorities are needed in minority movements and fights.
It has been proven over the course of history that minorities unfortunately cannot cause drastic movements in civil and human rights without the support of non-minority people. Would slavery be abolished today if Representative James Mitchell Ashley had not proposed an amendment abolishing slavery and President Lincoln then issuing the Emancipation Proclamation? Did you know there were tens of thousands of white people who participated in the March on Washington?[note]https://www.washingtonpost.com/lifestyle/style/in-march-on-washington-white-activists-were-largely-overlooked-but-strategically-essential/2013/08/25/f2738c2a-eb27-11e2-8023-b7f07811d98e_story.html?utm_term=.29471b97c18c[/note] If the white people involved in the space program had not been willing and open to working with the black women working at NASA the puzzle pieces for the race to the moon would not have been put together properly. Their cooperation with each other is the only thing that made it work. We ALL need to come together, work together, commune together. We are better together.

The idea really was to say to those people in the middle, white folks in the middle, ‘You have to come and support this movement. You can’t sit on the fence anymore.[note]https://www.washingtonpost.com/lifestyle/style/in-march-on-washington-white-activists-were-largely-overlooked-but-strategically-essential/2013/08/25/f2738c2a-eb27-11e2-8023-b7f07811d98e_story.html?utm_term=.eb4872ad9f27[/note]

Lesson 5: At some point, in every aspect of life, someone must choose to be the first.
I can’t even describe this lesson. Go see the movie and you will understand!