OPINION: Trump’s Muslim Ban: Why Them? 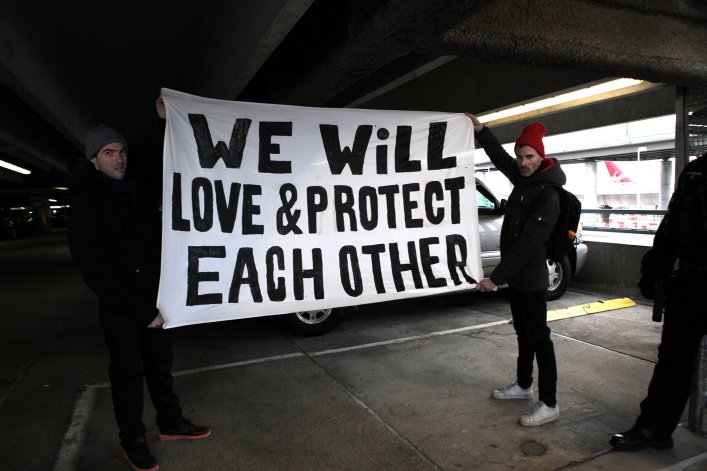 I’ve already accepted that this will be difficult for some to read and even more difficult for some to accept.  For hundreds of years, “minorities” have faced persecution from white men in this country.  Actually, for thousands of years, white men have persecuted this world. Literally.  Anywhere and everywhere possible, white men, have historically invaded lands and nations that did not belong to them, claimed them and often infected them with disease and other parasitical remnants, without reprieve.  This is not a “racially charged” claim, or a prejudicial assumption.  This is the history of our world.  The history of white supremacy.  A putrid history, but our history nonetheless.

Accepting this history is one of the most difficult things for those of us that don’t bare white skin.  Undoubtedly, it often seems to us that those wearing white skin can easily overlook and excuse the behavior of their ancestors, while adamantly insinuating that the vile behavior that continues today holds no correlation.  While most of America is now hysterical over the ‘temporary’ ban surrounding immigration that was issued Friday, January 27th, Donald J. Trump, the newly elected President of the United States of America and his White House stand behind his decision.

To put my perspective into context, Donald’s executive order did the following:

Many have cited President Obama’s similar action in 2011 – including Donald Trump, who said:

Let’s settle this.  Obama did order his administration to pause consideration of Iraqi refugee applications for six months in 2011, however Trump’s actions prove to be far more detrimental, preventing all citizens of Iraq from entering the United States for 90 days. The other nations under the same restrictions are: Iran, Libya, Somalia, Sudan, Syria and Yemen.

This is sad. Very, very bad. (had to get my own version of a Trump tweet in this one)

I didn’t know how I wanted to address this.  I thought about waiting until Monday morning and just addressing it on my show, but it has just been tugging on me too much.  I take issue with this #MuslimBan mostly because of it’s blatant hypocrisy.  America has long had a history of punishing others for actions against us, but it seems to me that ‘Lady Liberty’ takes no responsibility for the problems she creates at home.  Donald, has said on record, that his “extreme vetting” system will help “keep radical Islamic terrorists out of the US.”  I know, for a fact, that I am not the only one that wants to vomit when I see his reasoning.

“Radical Islamic Terrorists…”  What the hell?

I get it. We should all be concerned about the growth of ISIS and the havoc that it’s wreaked in the last several years.  I have another question though; it’s more pertinent to my life:  Where is the outrage for the domestic terrorism that happens everyday?  I haven’t polled my minority peers directly, but based on my light research and an aggregation of tweets and Facebook posts, I’ve found that generally we are not as concerned about ISIS.  At least not as much as our fellow white brothers and sisters claim to be.  We deal with terrorism on a daily basis, and none of it has anything to do with people from these 7-banned countries. None of it.

Does that make us un-American?

We’re just about as un-American as you, the non-minority, that stands by and watches as we’re gunned down by ‘law enforcement officers’, while often unarmed, day in and day out.

We’re just as un-American as you, the non-minority that sees nothing wrong with your privilege and access destroying the sacred grounds of natives, to this land.

We’re just as un-American as you, the non-minority, that saw nothing wrong with a racist, hateful, misogynist man running for the highest office in the land – and electing him.

Why is your American better than mine?

Why does it seem that your Americanism always gets preference?

By no means am I saying that all white people are bad.  I’m really not stating anything but perspective and some of my raw emotions.  I am not alone in feeling this way, and there are hundreds that you interact with on a daily basis, that may have a different viewpoint as you.  On the real, we know that generalizations help no one and I’d be dense to believe that the majority of people stand behind the actions of this illegitimate Presidential clown that currently holds the office.

What I am saying is – we need to start having some conversations.  Get out of your comfort zone and learn about the people that are different than you.  A conversation with someone that is different, may open your mind and expand your heart.  It may even compel you to change or at least check your beliefs. Below is a link of the 46 Senators that remained silent as Donald Trump signed this ban on Friday. 46 of them.  Silent.  If this silence says nothing to you – you’re probably part of the problem.

All across our nation, thousands have been compelled to take action.  Protests have erupted all over and there is a sweeping response to the injustice that affects us all.  Disturbing reports of suicide attempts have begun to roll in and so many HUMANs are faced with ultimatums that are simply unfair and inhumane.

No one person is going to change things – but as a unified front, we can make a difference.

I am committed to seeing change in this world.