And The Oscar Goes To… 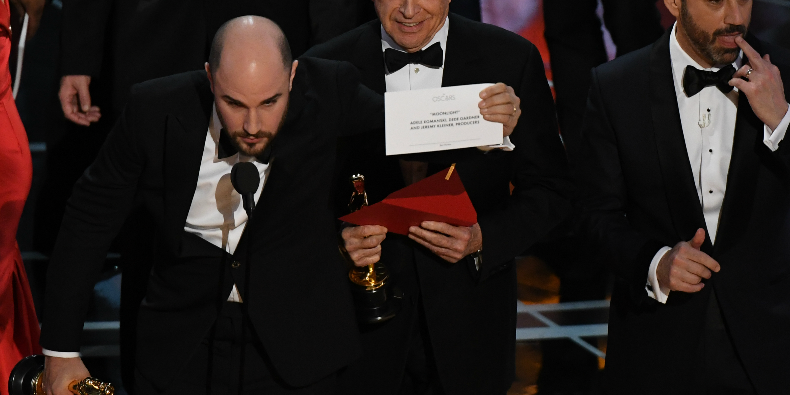 It was a long evening watching The Oscars as they ended well past it’s allotted 3 hour time slot. If you did not stay until the end then you missed the biggest mix up of the night.

La La Land was announced as the Best Picture winner, the last and one of the most coveted awards of the night. Shortly after beginning his thank you speech, La La Land director Damien Chazelle was interrupted by staff coming onto the stage to correct a horrible mistake.

La La Land producer then stepped back up to the mic stating “There’s been a mistake. Moonlight won…This is not a joke, come up here” he said looking towards Moonlight cast, director and producer.

Warren Beatty and Faye Dunaway were the presenters for the award. When Beatty opened the envelope after the nominees were announced, Beatty looked confused at the envelope and hesitated, before Dunaway looked over at the card and announced La La Land as the winner.

“I want to tell you what happened,” Beatty said. “I opened the envelope and it said Emma Stone, La La Land. That’s why I took such a long look at Faye and at you. I wasn’t trying to be funny.”

“Even in my dreams this could not be true. But to hell with dreams. I’m done with it because this is true” said Barry Jenkins, Moonlight director after coming on stage to accept what was rightfully his.

In other Oscar news, Viola Davis became the first African-American female to get the Triple Crown honor, an honor given to actors who have won a competitive Academy Award, Emmy Award and Tony Award in the acting categories. 23 people, now including Viola, have achieved the triple crown of acting (14 women and 9 men). See her incredible, tear-jerking speech below.

Mahershala Ali also became a first. Ali won the Oscar for Best Supporting Actor, becoming the first Muslim actor to win an Academy Award…in 2017. Yes we agree that’s a shame. He accepted the award and thanked his wife who just gave birth to their new baby girl Bari Najma four days ago. Congrats to Ali for winning in life all around!

If you missed the mix up you can see it below along with the other winners of the 2017 Oscars.