Op-Ed: THE PURGE – Murder by Government 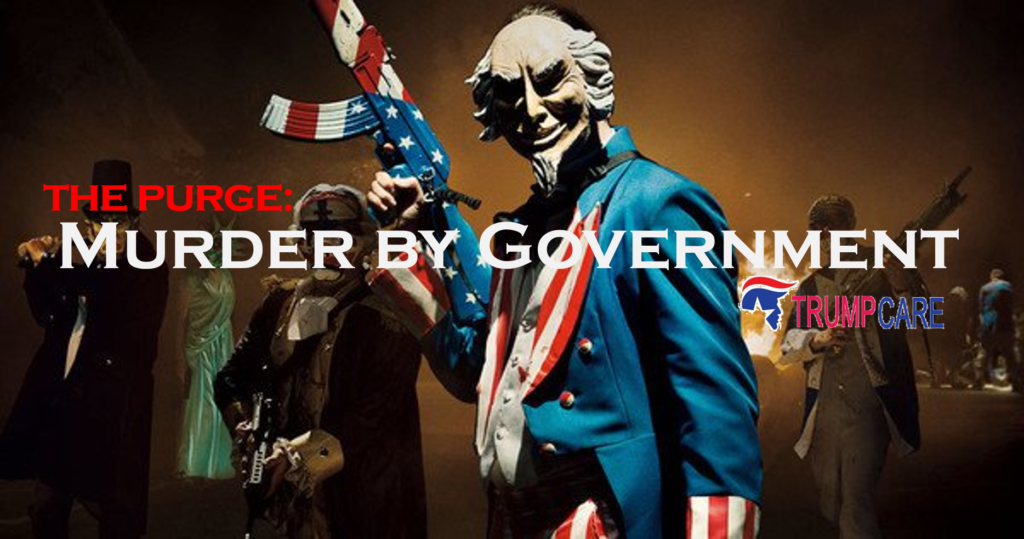 Friday – once again – America made history.  Undoubtedly, there was heightened sensationalism behind what we saw, more than anything else, but if there’s something to be sensationalized, it should definitely be the Trump administration’s first ‘win.’  Yeah, let’s call it that.  Unless you’ve been under a rock, you’ve heard by now that House republicans passed the new Affordable Care Act 2017 today, just before their Spring recess.  Monumental celebrations occurred and continued into the rose garden where Donald T held a press conference after this “victory.”

Yes, you read that right. He held a press conference-esque celebration in the rose garden, for a bill that passed the first step.

I’m not trying to steal any shine from Donald.  I just believe that it’s very important to highlight some clear issues with this newly proposed legislation, and it’s time for us, as a community, to get on the same page.  I could rant and rave about how much your votes ‘would’ve’ counted now, but I’d be wasting my breath.  I’d also be extremely petty.

The majority of us are aware that Donald ran his campaign and touted his desire to:

Some 41 days ago, when this was first attempted, House republicans failed miserably.  Scrambling to ensure something was done, as Donald recently surpassed his 100 day mark in the White House, they came together once again to vote.   Today, they’ve unified to make a change.  At least, it seems so.

We, as the American people, are often treated as if we are blind or unaware.  This superficial truth often plagues the black community even more.  We know that the Affordable Care Act (affectionately called Obamacare) was not perfect in it’s initial form.  I don’t really wonder why it never got better, because I’ve always felt that the reasoning was pretty clear.  After seven years of opposition from a rancid republican party and devout vows to repeal it as soon as humanly possible, the ‘American’ unity and ‘greatness’ that should have surrounded such a monumental piece of legislation, was left to die.   Many of the promises that President Barack Obama touted and stood upon, when announcing this groundbreaking healthcare initiative had to be scaled back. Insurance giants, hospitals and republicans alike, seemed to take offense and issue with a program that would be life changing for so many in this country.

So, here we are today, some one hundred and something days into Donald’s reign, and new legislation has just passed the House.  I spoke of sensationalism at the beginning of this piece, so let me clarify: push alerts and tweets, have the ability to have you severely in your feelings if you don’t remember your civics lessons, and how things work.

Today, the bill passed the House.  If you’ve been following along, you understand that all three branches of our government are currently run by republicans.  The White House, the House of Representatives and the Senate all have majority republican representation, and this is what’s scary.  The new Affordable Care Act 2017 bill passed the House today, and in a few weeks will make it’s way to the Senate.  So far, it doesn’t look like this undeveloped bill would pass the senate – but here’s what you should know:

The Not So Good

We’re asking now – why was this bill pushed through so quickly?  In 2009, when the Affordable Care Act was headed to the House, then Representative Paul Ryan spoke  and recommended that every piece of the process be examined closely and demanded that any and everything was approved carefully.

A couple of questions have been swirling in my mind, really since the charge to elect Donald began.  Republicans have been intent on tarnishing the legacy of President Barack Obama, since he was elected, by no surprise.  Endangering the wellbeing of others should never be a part of the destructive plot to ‘take the country back.’  We elect representatives to do the right thing, and to make decision on behalf of all of us. Where is the concern for others?  Where is the empathy for the disabled and elderly?  What about the financial disadvantaged, or those with pre-existing conditions?

Let’s jump on that.  You and I both know plenty of people with pre-existing conditions.  Prior to the implementation of Obamacare, a woman could pay higher premiums, just because she was a woman.  Women were also endangered of being dropped, if they became pregnant.  Obamacare ended that.  Though the proposed Trumpcare bill claims to cover ‘pre-existing’ conditions, it is unclear what the cost will be.  Speculation is that those with pre-existing conditions may face higher premiums or may be forced to be seen in emergency rooms, if their provider chooses not to offer coverage.  Donald’s bill offers nearly 8 billion dollars to cover pre-existing conditions, but early estimates suggest that this may only cover 1 to 3 percent of individuals.

What is a pre-existing condition under Trumpcare?

I’m still in the question asking mood. Maybe they are only connected to people that can afford healthcare?  Yes, that must be it.   Kurt Eichenwald, a writer at Newsweek slammed House Republicans for voting for the ObamaCare replacement bill in a fiery, but now deleted tweet, last week:

Without care, we don’t live.  Without proper care, we don’t live long.  Last week, GOP congressman Raúl R. Labrador (R-Idaho) stood in front of constituents at a town hall and exclaimed, “Nobody dies because they don’t have access to health care.”  Yes, this really happened:

It’s imperative that we’re aware of what’s happening and unfortunately, it’s more crucial now, than ever before.  The members of our BLACK communities, and families need to have each and every detail.  When the details aren’t offered to us, as they’re often not, it’s important that we seek them out.  Our daily lives will continuously be impacted and challenged by legislation proposed and passed by this troubled administration.  I liken the decision making and critical thinking skills within this leadership team, to those of an elementary school kickball team captain.  Logic and knowledge is not what leads, but privilege, arrogance, ignorance and faux bottom lines are driving most of the decisions that affect millions of Americans.  Sadly, so often, our frustration with these poor decisions is coupled with an assumption from the republican party, that many of us [liberals, democrats or ‘other’] are still bitter that we lost the last election.

Without rehashing such a Faux pas, I think it’s safe to say that the majority of Black Americans care about our well-being, above the results of a rigged election, and undoubtedly the health and welfare of our family members.  I am on board to sound the alarm, and speak out consistently, to hold the elected officials, legitimate or not, accountable.  It’s time to fight, and the months and years (at least four pending no re-election) ahead will be no cake walk.  There is a forceful campaign against us, with the hopes to keep us in the dark, quiet, and again marginalized.  The success of that campaign, hinges upon keeping us blind and unaware.  This fight will require a level of discomfort, likely a level of crazy, but more importantly a level of unity we haven’t seen in awhile.  It’s time for new leaders to emerge in our communities and step up. It’s time for us to hold each other accountable, so that we can hold this country accountable.

Is your search history affecting your flight prices?