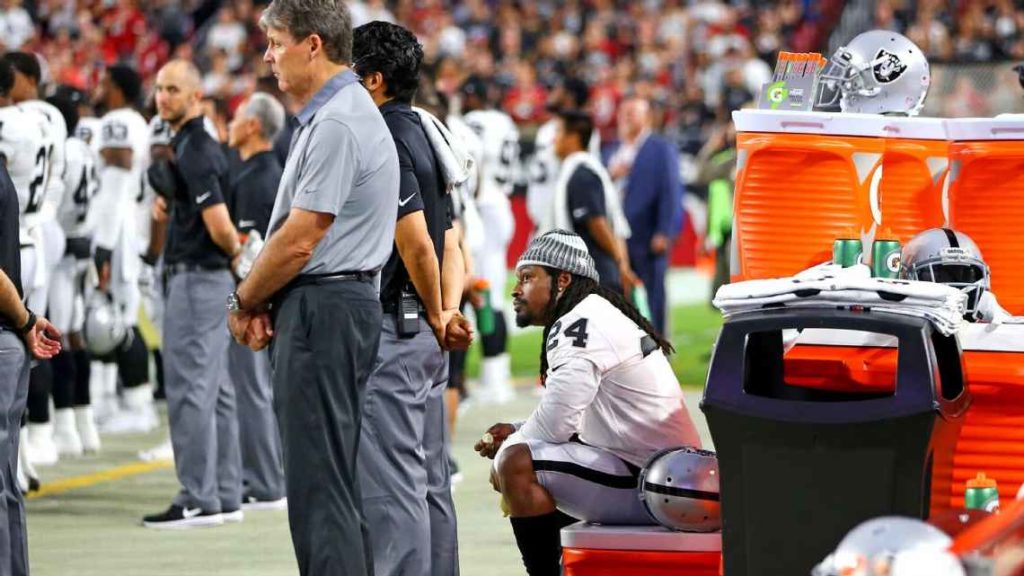 Marshawn Lynch appeared to stage a silent protest in his return to the NFL, as the Oakland Raiders running back remained seated during the national anthem prior to the team’s 20-10 loss to the Arizona Cardinals.

Photos show Lynch, who suited up but did not play, sitting on a cooler while holding a banana during the anthem.

Lynch has talked to the media once since he came out of retirement and was acquired in a trade with the Seattle Seahawks during the spring, and that was in the offseason program.

Raiders coach Jack Del Rio said he spoke with Lynch after the game and was not aware that he planned to sit.

“[Lynch] said, ‘This is something I’ve done for 11 years. It’s not a form of anything other than me being myself,'” Del Rio said. “I said, ‘So you understand how I feel. I very strongly believe in standing for the national anthem, but I’m going to respect you as a man. You do your thing, and we’ll do ours.’ So that’s a non-issue for me.”

Raiders quarterback E.J. Manuel said the team supports Lynch, adding the decision was “more of a personal thing” for him.

Lynch was not in the NFL during Colin Kaepernick’s kneeling protest against racism and police brutality last season but has previously expressed his opinion on Kaepernick’s action, commending the quarterback for addressing the problem.

ESPN’s Josh Weinfuss and The Associated Press contributed to this report.