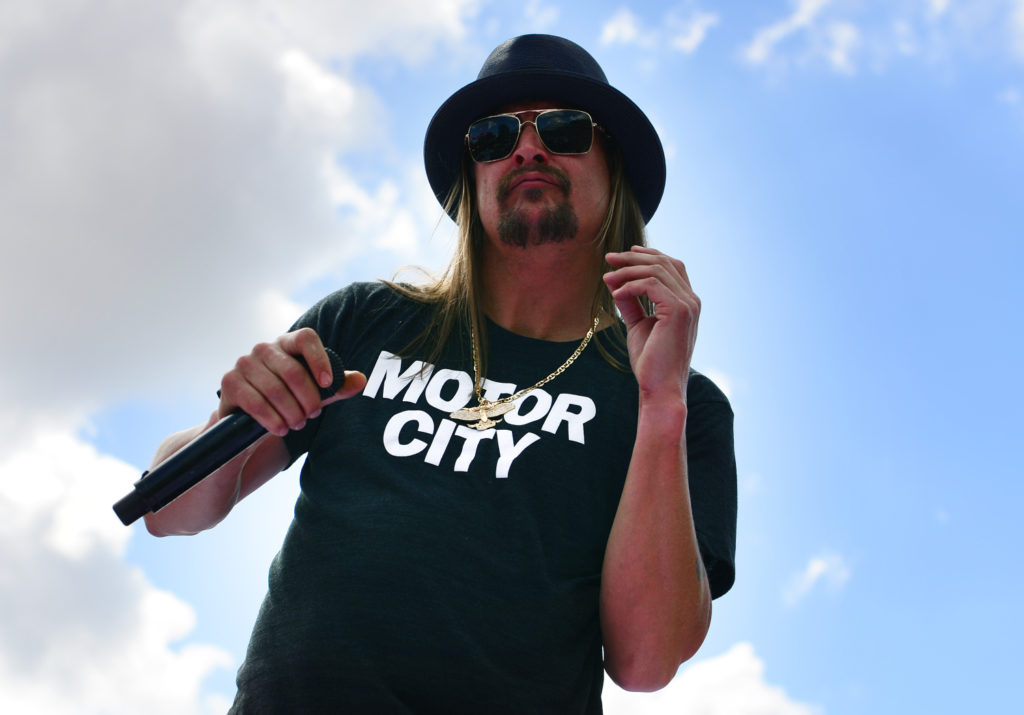 A predominantly black arena, in Detroit, has it’s citizens in an uproar. In response to the decision to have Kid Rock, Detroit native, opening the new Little Caesar’s arena with a series of concerts, many civil rights groups have planned to protest. Kid Rock’s recent use of the Confederate flag, remarks on NFL quarterback Colin Karpernick and support of Donald Trump caused criticism from one of the leading civil rights organizations in the nation, the National Action Network.

Selected by Olympia Entertainment, Kid Rock is set to open the brand new $860 million Little Caesars Arena headlining as the opening act – for six shows – beginning Tuesday, September, 12 2017. Kid Rock, who is white, has been praised for his past involvement with the community of Detroit, and was even celebrated with an award by the NAACP in May 2011 for his work. Recently, his criticism of Kaepernick has created a varying opinion from the citizens of Detroit.

Colin Kaepernick, who is black and the former quarterback of the San Francisco 49ers, was black balled from the NFL after refusing to stand during the national anthem with the 49ers last year. Kaepernick’s refusal to stand was in support of a protest toward police brutality and social injustice. During a concert last month, Kid Rock made a comment on the former quarterback:

The response added curiosity to Kid Rock’s view on racism. The singer’s comments on Kaepernick drew immediate attention. Many voiced their opinion on Kid Rock’s bashing of the NFL star, including Reverend Charles Williams II, president of the National Action Network. “The hate statements that he has made toward Colin Kaepernick are absolutely ridiculous, and I think that they, also, show that he is cat-calling and dog-whistling to the white supremacist groups” said Williams in response to Kid Rock opening the arena. Williams states that having Kid Rock as a representation of Detroit, at some point, is an “insult” to the black community.

Monday morning, Kid Rock turned to social media to respond to critics. “People! Pay NO attention to the garbage the extreme left is trying to create!” said the singer via Facebook. He, also, chimed in on the backlashes he received regarding Kaepernick. Kid Rock wrote, “F— ANYONE who takes a knee or sits during our national anthem! Pretty sure if Russell Wilson or Tom Brady were doing it they would have no problem finding a job playing for any team they wanted in the NFL! So cut the bull—-!” Kid Rock argues that he is the “KING OF DETROIT LOVE” before accusing his critics of being jealous of the positive work he’s done in Detroit.

On Tuesday, nearly 500 protesters began their march in downtown Detroit on the brand new Little Caesar’s arena. The National Action Network, led by Reverend Williams, ended their protest against Kid Rock outside of the arena. “We want to make sure they understand that police brutality in America is real. Racial profiling in America is real. And taking our tax dollars to hire someone who promotes hate needs to stop,” said Williams as he led the march. Joining protesters, were members of Black Lives Matter and Students for a Democratic Society. “To have Kid Rock as the opening act is really a slap in the face of the community” said John Brenner, citizen of Pontiac, after explaining how the costs of the new arena take away from schools of the community and add to the poverty rate.

For roughly 90 minutes, protesters and fans of Kid Rock shared the sidewalks of the Little Caesar’s arena. “God bless Donald Trump” shouted a man, as he stared at protesters. Gangs of bikers at the opening performed an opposing protest by riding up the opposite side of the road, revving their engines with hopes to overpower protesters. Numerous officers from the Detroit Police Department kept watch over the active protests and remained alarmed. Despite the tension amongst the crowds, the protests remained peaceful. “This group out here, much kudos to them for maintaining their professionalism, maintaining a relationship with the police department, allowing traffic to continue and keeping their emotions under control,” said Detroit Police Dep. Chief Elvin Barren.

As the protest came to an end, approximately 100 young protesters, unaffiliated with the National Action Network, came to the arena to continue the bashing of Kid Rock. The protesters participated in a series of chants, throwing shame at participants of the concert and those who attended the arena’s events. Police continued to gain control over both the younger protesters and the opposing protest taking place a few blocks away.  Luckily, no arrests were made.

Shawnelle La Grande is an Intern and Muiltimedia Journalist with Urban Newsroom. For comments, assistance or help, contact Shawnelle at SLaGrande@urbannewsroom.com