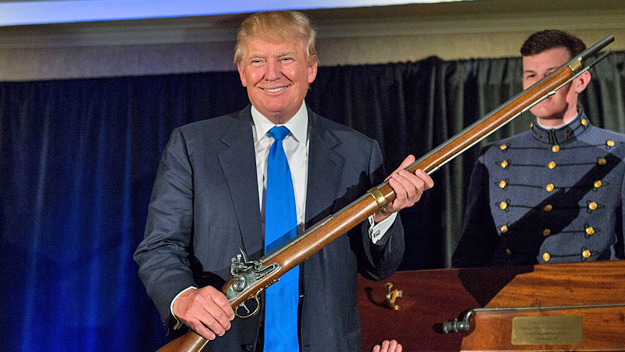 WASHINGTON — Monday, during a joint news conference in Tokyo, President Donald Trump was asked about the mass shooting at a Texas church and put the blame squarely on mental health, not gun control.

“Mental health is your problem here,” Trump insisted, saying that “preliminary reports” described the shooters as  “a very deranged individual.”

“This isn’t a guns situation,” Trump said. “This is a mental health problem at the highest level. It’s a very, very sad event.”

On Sunday, 26 people were killed at a church in Sutherland Springs, Texas, with victims ranging from 5 to 72 years old and including the 14-year-old daughter of the church’s pastor, Frank Pomeroy, who was out of town at the time of the shooting with his wife.

Earlier on Monday, Trump addressed the shooting before his remarks to business leaders at the US embassy in Tokyo, calling it “horrific” and an “act of evil.” While he said that his “thoughts and prayers” were with the victims, he also did not offer any legislative solutions.

“This act of evil occurred as the victims and their families were in their place of sacred worship. We cannot put into words the pain and grief we all feel and we cannot begin to imagine the suffering of those who lost the ones they love,” Trump said during his remarks.

The president also urged unity, saying it was what Americans “do best.”

NEW DEAL ALERT! Ciara JUMPS Over To Uptown & Republic Records With Her Own Beauty Marks Label For New Album, The Princess Is Back!

BACK IN HER CHAIR: Wendy Williams’ Latest Interview Has Fans Concerned, Talks About Getting Her Own ‘Podcast’