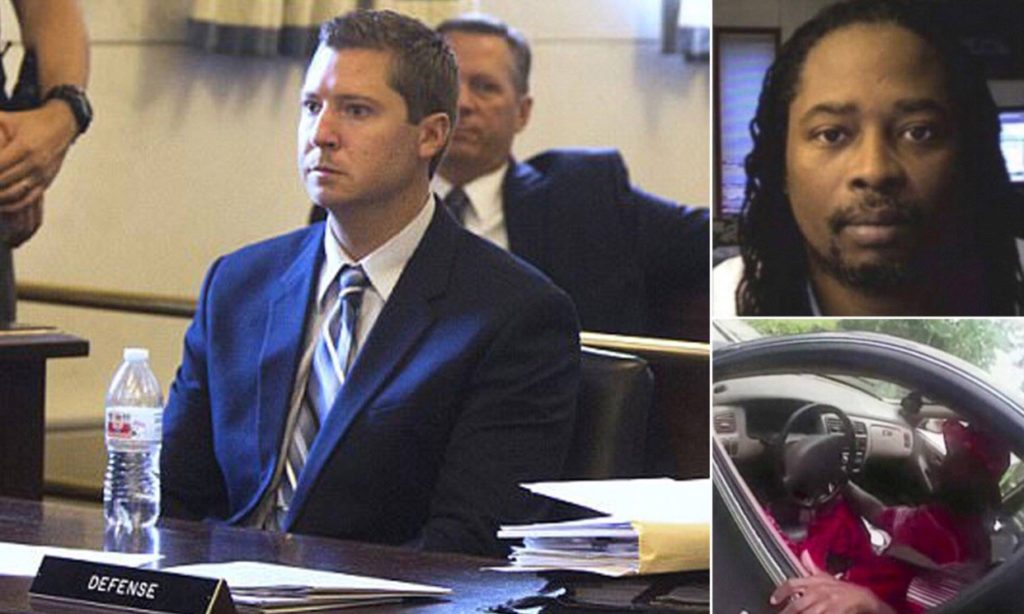 The University of Cincinnati is paying Tensing to settle a union grievance brought on his behalf for his 2015 firing following his indictment on murder charges, which were dropped last year after two juries deadlocked.

Body cam footage of the incident in Cincinatti on July 19, 2015 appears to show the second officer standing away from the car with his gun out. DuBose had driven the car half a block after Tensing shot him in the head

The Fraternal Order of Police had challenged Tensing’s dismissal, saying he should not have been removed from the university’s police force before the case was resolved and was entitled to be reinstated.

As part of the settlement, the union said, Tensing has resigned and will not pursue any other claims against the university.

DaShonda Reid, the mother of four of DuBose’s children, was engaged to marry him before he died.

‘To even want compensation [after] murdering an innocent man shows how soulless and callous he is,’ she said.

‘UC has now reversed any of the rights they attempted to do by Sam. His blood is not only on Tensing’s hands [and] the justice system, it’s now on UC’s hands.

‘He’s officially a paid assassin who has not shown one ounce of remorse for killing an innocent man.

‘To even want compensation (after) murdering an innocent man shows how soulless and callous he is.’

Beach Please! Here Are 5 Less Celebrated Beach Areas In The US To Check Out – Travel Noire