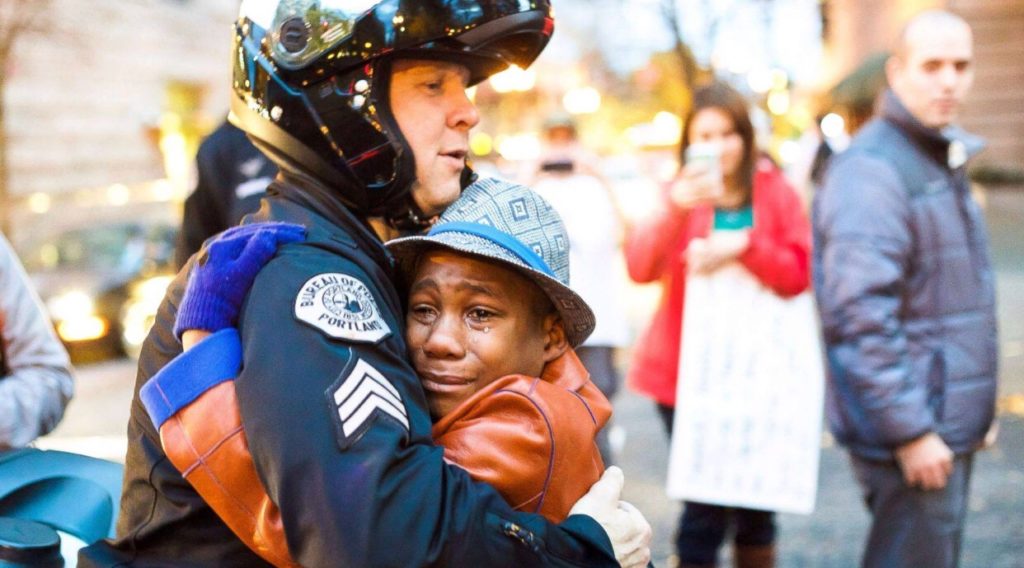 A teen who was seen hugging a police officer in a photo that went viral during 2014 protests over the police-involved shooting death of Michael Brown has been reported missing after several members of his family died in a horrific car crash.

Five people have been confirmed dead after the SUV they were in went off a cliff near Mendocino in Northern California, on Monday, officials from the California Highway Patrol and the Mendocino County Sheriff’s Office said in a joint press conference Wednesday afternoon.

Devonte Hart hugs a cop in Portland, Ore., Nov. 25, 2014, in a photo that went viral. Hart has been reported missing following the death of his parents in a car crash.

Search and rescue teams continue to look for Devonte Hart, 15, and his siblings, 16-year-old Hannah Hart and 12-year-old Sierra Hart, officials said. Their parents, Jennifer and Sarah Hart, and three of their siblings died in the crash.

The scene was “confusing,” with no brake or skid marks before the car fell 75 feet into the Pacific Ocean, authorities said.

Authorities have every reason to believe that all six children were in the SUV. The victims were not wearing their seat belts at the time of the accident, officials said.

Investigators are still trying to piece together exactly when the crash occurred, and there were no witnesses. The car engine was cold by the time first responders arrived on the scene, authorities said.

There was no evidence left in the car, but police are searching for possible gas or hotel receipts to obtain a better timeline, officials said, adding that they have “no reason to believe” that the crash was “an intentional act.”

Fest-goers Disappointed as Organizers Announce END of Afrochella in Ghana