Teen turns down plea deal for 25 years in prison, gets 65 years instead 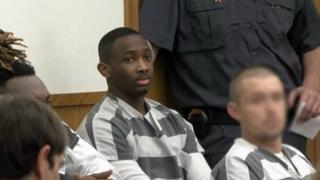 WETUMPKA, Ala. — A teenager tried as an adult under Alabama’s accomplice liability law was sentenced to 65 years in prison Thursday after rejecting an earlier plea deal that recommended 25 years.

In a two-day trial in March, Lakeith Smith, now 18, of Montgomery was convicted of felony murder, burglary and theft for helping in the 2015 break-ins of two homes in Millbrook, about 10 miles north of Montgomery. He did not kill A’Donte Washington, 16, of Montgomery, who was part of a group of five accused in the thefts.

But several in the group, including Washington, fired shots at Millbrook police officers who responded Feb. 23, 2015, to a call of a burglary in progress, according to officer body-camera footage. The officer that Washington ran toward pointing a .38 caliber revolver fired his police-issued sidearm four times, killing Washington.

Smith was accused of being criminally responsible for the acts that led to Washington’s death, the gist of Alabama’s accomplice law. An Elmore County grand jury cleared the officer who fired the fatal shots; the officer’s name was not released.