You Ain’t Slick: Trump Flips on the NFL 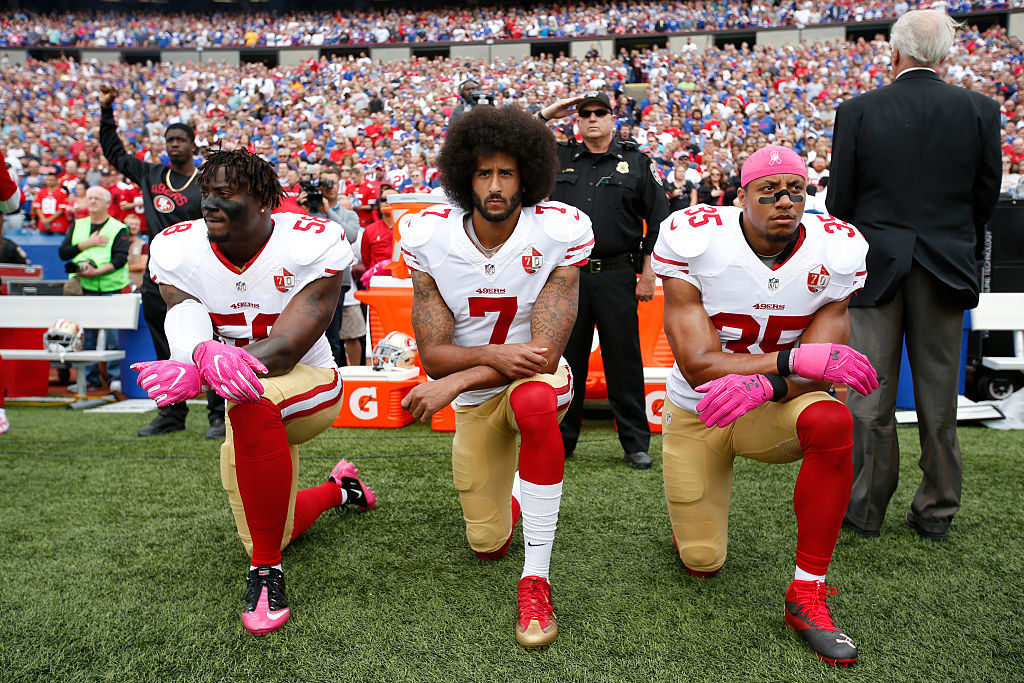 After nearly two years of ostracizing and politicizing NFL players like Colin Kaepernick, Donald Trump has flipped and plans to extend an olive branch to the players.  Early Friday, King Trump spoke from the Whitehouse:

A new tune from a different beat — directly from the mouth of the controversial Whitehouse resident.   This embattled assclown says that he wants to meet with NFL players and other athletes who kneel during the National Anthem so they can recommend people they think should be pardoned due to unfair treatment by the justice system.

“You have a lot of people in the NFL in particular, but in sports leagues, they’re not proud enough to stand for our National Anthem. I don’t like that,” Trump said Friday, also insisting that players should not remain in the locker room when the “Star Spangled Banner” is playing.

“What I’m going to do is, I’m going to say to them instead of talk … I am going to ask all of those people to recommend to me — because that’s what they’re protesting — people that they think were unfairly treated by the justice system,” Trump said. “And I understand that.”

Here’s the thing — this man has single handedly attacked these players –with one goal in mind–appealing to his base.  It’s been blatantly clear that he doesn’t care about anyone.  We cannot forget that he turned Colin Kaepernick’s peaceful protest to bring awareness to police brutality and the mistreatment of minorities into a sideshow, claiming that he and his colleagues were unpatriotic ‘sons of bitches’ who had no respect for the country or the American flag.

Recently, the NFL implemented a new policy that teams could choose to require athletes in their arenas to stand during the playing of the anthem. It also gave players the option of remaining off the field, in the locker rooms, during the playing of the anthem if they choose not to stand for it.
I think Trump’s found his trump card.  He’s got to be feeling like King Trump right now.  Pardoning is a gift and immediate action that any sitting President (and/or governor) can enact without prior approval, agreement or any checks and balances.   In the last few weeks, Trump has exercised this authoritarian right.  I suspect he’ll continue to use it and abuse it to manipulate the office and America further.

While it’s jarring to me that this man is still sitting in the Whitehouse, it’s important that we look at all of his actions, compare them with the facts and stay focused.  As minorities, we’re often pleased when elected officials finally do the right thing, but too often we fail to hold them accountable when it matters.   Donald Trump has been nothing but a cancer to this country and our society.  Petty offerings, while accepted, do not erase his bigoted policies, racist rhetoric and the fact that he’s never apologized.  For anything.

O.J. Simpson Sued by Father of Ron Goldman Over 1994 Murder

‘Westworld’ Season 4: Evan Rachel Wood, Tessa Thompson, Aaron Paul And More On ‘Humanity In The Face Of Free Will’ – Shadow and Act