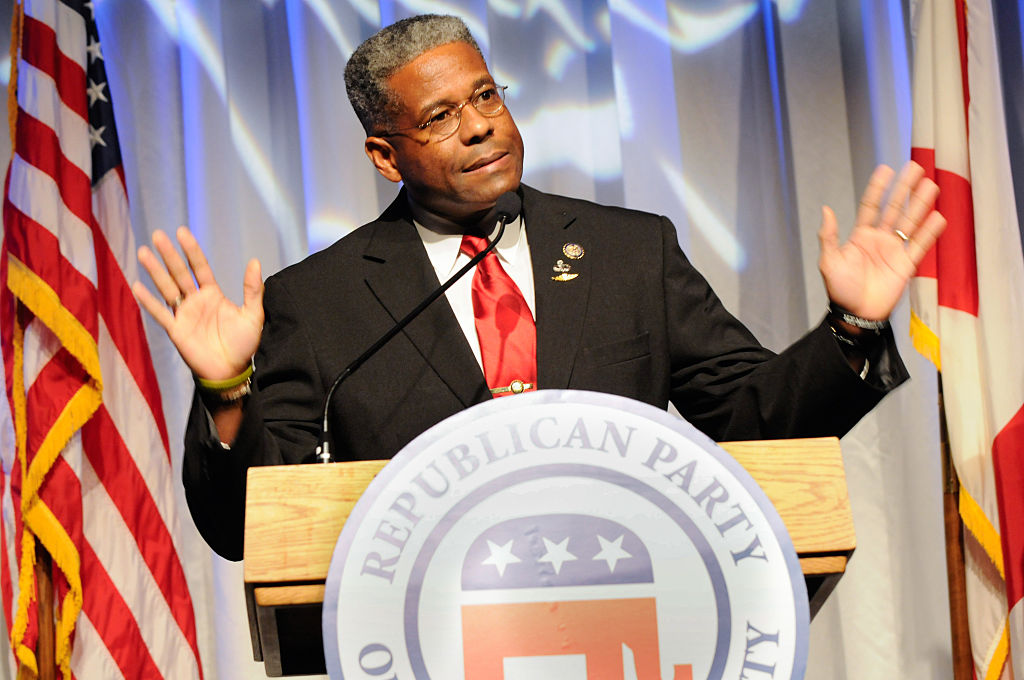 Texas gubernatorial candidate Allen West is downplaying his admitted case of “COVID pneumonia” despite being hospitalized for it on Saturday night. The ultra-conservative Republican who has not endorsed the COVID-19 vaccine tweeted about his medical status and tried to put a positive spin on what sounded like a grave situation.

Hours are announcing that he and his wife had contracted COVID-19, West tweeted Saturday afternoon that the two of them had “completed the monoclonal antibody infusion therapy and are in the observation period.” He added that there was “concern” about his own oxygen levels, as COVID-19 is known to aggressively attack the respiratory system.

Amazingly, in a subsequent tweet, the 60-year-old described his diagnosis as “not serious” and said he would likely go to the hospital.

2/ My chest X-rays do show COVID pneumonia, not serious. I am probably going to be admitted to the hospital.

West tweeted Sunday morning that his wife had been released from the hospital while he was kept for additional observation. But in the same Twitter thread, West doubled down on his opposition to the COVID-19 vaccine, suggesting that his hospitalization had somehow renewed his anti-vax stance.

However, choosing the treatment all but revealed West — a QAnon-supporting, one-term Congressman and Army veteran “war criminal” who once called for former President Barack Obama to be impeached — to be another in a growing list of right-wing extremist anti-vaxxers.

“I can attest that, after this experience, I am even more dedicated to fighting against vaccine mandates,” West tweeted Sunday morning. “Instead of enriching the pockets of Big Pharma and corrupt bureaucrats and politicians, we should be advocating the monoclonal antibody infusion therapy.”

He added without proof in a subsequent tweet: “I now have natural immunity and double the antibodies, and that’s science.”

West then made a campaign promise to “vehemently crush anyone forcing vaccine mandates in the Lone Star State” if he is elected governor.

The Guardian has reported that West is unvaccinated and his wife is fully vaccinated.

West’s dedication to such right-wing, conservative rhetoric has been nothing short of consistent.

West, who is running against incumbent Texas Gov. Greg Abbot in the Republican primary next year in a longshot campaign that began this past summer after he abruptly quit his job as chairman of the Texas Republican Party,Â has previously referred to public health guidelines for the COVID-19 pandemic as “tyranny.” Addressing Abbott’s policies specifically last year, West decried “the despotism, the tyranny that we see in the great state of Texas, where we have executive orders and mandates, people telling us what we can and cannot do, who is essential, who is not essential.”

Also last year, West appeared at the Texas Freedom Rally, where he led a caravan of motorcycles and cars from DallasÂ toÂ AustinÂ in a protest that was held with the purposes of â€œsecuring our civil liberties, defending the constitution, and making sureÂ TexasÂ is open for business,â€�Â according to a press releaseÂ about the event. During the rally, West was injured afterÂ his motorcycle crashed.

West also attended a conference in Dallas that the Texas Tribune described as having â€œties to the QAnon conspiracy theory movement, where a former Trump administration official advocated for a military coup on the U.S. government.â€� He spoke during the â€œFor God & Country Patriot Roundupâ€� event that included former National Security Adviser Michael Flynn claiming Trump could be reinstated as president if a coup dâ€™etat takes place.

Westâ€™s attendance suggested he, like QAnon followers, believes the debunked conspiracy theory that Trump is the legitimate president who was defrauded out of the White House by a rigged election. West has also previously been linked to QAnon, including using the groupâ€™s motto, â€œWe are the storm,â€� for the Texas Republican Party when he first took leadership of the group. Despite all of West’s adoration, Trump has endorsed Abbotâ€™s bid for re-election.

To be sure, West is also a former Army colonel who was all but forced to retire in 2004 after he was charged with assaulting an Iraqi.Â The Nation reminded readersÂ of how â€œWest let the soldiers under his command beat the Iraqi man, whom West believed was involved in an attempt on his life. (No evidence was ever found implicating the man). Then, he staged a mock execution.â€�

As far as his political career goes, West has never kept it a secret how much he resents Obama, who was already the president when West won his congressional election in 2010. Citing the infamous prisoner swap with the Taliban that freed U.S. Army Sgt. Bowe Bergdahl, West called for Obama to be impeachedÂ in 2014.

â€œObamaâ€™s breaking of the law in this case presents serious national security concerns â€” for all Americans,â€� West said at the time. â€œThis is aiding and abetting the enemy, which goes along with the collusion of this administration with Muslim Brotherhood-affiliated organizations and supplying weapons and arms to Islamists.â€�