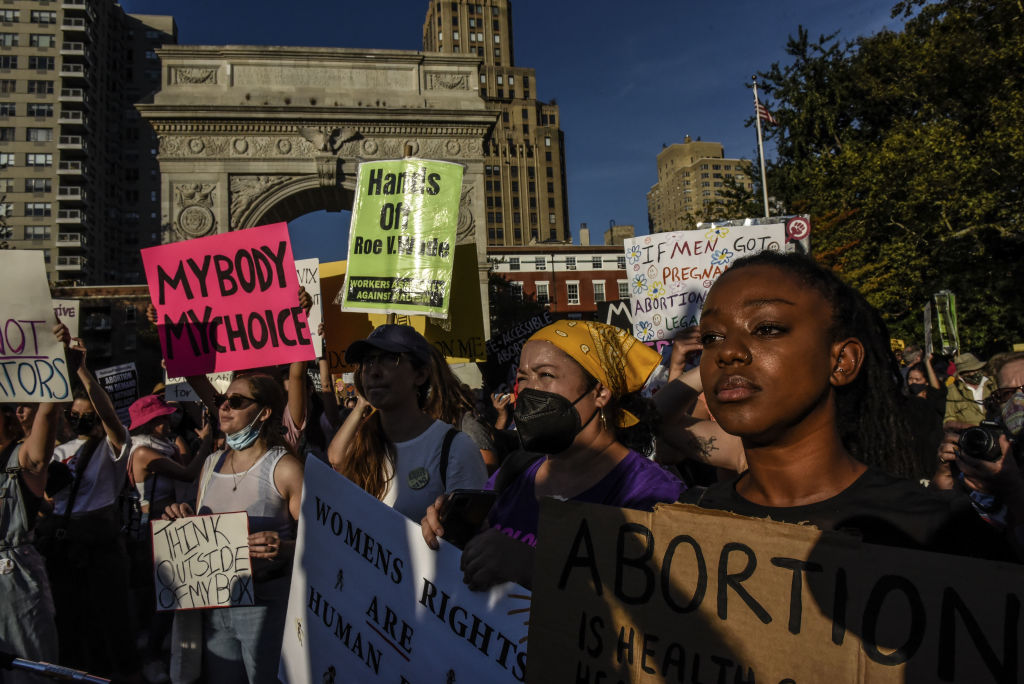 On Oct.2, thousands of women took to the streets of Washington, D.C., for the 5th Womenâ€™s March. This year, the organization shifted its focus to abortion justice and reproductive rights issues.

One of over 650 events nationwide, an estimated 5,000 attendees met at Freedom Plaza on Saturday morning. Some rallygoers kicked off the event with a â€œFaith Gathering,â€� CBS noted. The march then proceeded to the steps of the U.S. Supreme Court at around 1:30 p.m. Women of all races joined together during the momentous occasion. Some marchers held signs bearing bold statements in support of abortion rights. One womenâ€™s sign read, â€œI had a safe, legal abortion thanks to Roe v. Wade,â€� while another woman held a poster with the words â€œAbortion Is A Womenâ€™s Rightsâ€� written in bold letters. Marches were also held in major cities, including Austin, Texas; Jackson, Mississippi; Phoenix and Washington Square Park in New York City.

The Womenâ€™s March comes just one month after the state of Texas greenlit a controversial 6-week abortion ban that now gives private citizens the right to sue anyone who assists a pregnant individual seeking to have an abortion within the outlawed timeframe. The bill referred to as SB.8 could also punish abortion facilities and even healthcare officials who donâ€™t comply with the controversial piece of legislationâ€™s stringent protocols.

Michelle Colon, the founder of SHERo, said she hoped to push the medical biases that Black and Brown women often face when seeking reproductive health to the forefront of this yearâ€™s rally.

â€œWhen we go to the doctor, thereâ€™s coercion, disrespect, devaluing,â€� Colon said in an interview with Jezebel. â€œSo thereâ€™s a lot of obstacles for Black and brown women [when going] to the doctor, period. [We] have a history in the medical healthcare system when it used to be, [doctors] didnâ€™t want to provide us with care or they wanted us to be guinea pigs in their experiments. Theyâ€™ve allowed us to die,â€� she said candidly.

Colon added that she hopes this yearâ€™s event will shine a light on the Supreme Courtâ€™s upcoming hearing where the future of the historic Roe v. Wade landmark case could potentially be overturned.

â€œWe are at a standpoint where if the Supreme Court upholds the ban out of Mississippi, we are going to lose Roe in the south,â€� Colon warned, noting that anyone seeking an abortion in Mississippi would have to seek healthcare guidance elsewhere.

Similarly, the National Latina Institute for Reproductive Justice was present at this yearâ€™s event. The group, based in Virginia, Texas, New York, and Florida, aims to fight for the reproductive rights of undocumented people being affected by SB. 8 in Texas.

â€œWe organize in the Rio Grande Valley, specifically,â€� Margie Del Castillo, the national of field and advocacy, added to Jezebel. â€œThereâ€™s a lot of Border Patrol interaction and checkpoints along the Rio Grande Valley. So when you think about our members, a lot of who are undocumented in that area, if they were to try to access care, a lot of times thatâ€™s difficult, because of the addition of the Border Patrol.â€�

Despite challenges, Castillo said sheâ€™s optimistic about the future, noting that a â€œhistoric mobilization for abortion, access, and justiceâ€� has been spearheaded by a large number of BIPOC population, and sheâ€™s right.

Letâ€™s look at a few more Black and Brown-led reproductive rights initiatives that are fighting for change.

Based out of Atlanta, Georgia, Amplify’s mission is to work with the community along with other social justice organizations to help bring issues around abortion access and reproductive justice to the forefront.Â  The organization is currently working to combat expensive abortion costs and they are also helping to decriminalize self-managed abortions.Â

Preterm is a non-profit sexual health clinic based in Cleveland, Ohio that offers a number of reproductive resources to women in need including abortions, STD, and STI examinations in addition to birth control.

Preterm believes that “abortion is essential to bodily autonomy and gender equity for all people.” The clinic adds that they hope their services will help to dismantle “oppression and stigma.”

The Yellowhammer Fund is a 501(c)3 abortion fund and reproductive justice organization serving Alabama and the Deep South. According to their website, the organization envisions “a society in which reproductive decisions are made free from coercion, shame, or state interference.”Â Â

They offer to fund abortion services, travel needs, food and lodging, and other expenses that often hinder a personâ€™s ability to easily access their right to an abortion.

The Lilith Fund helps to support the rights of all Texans to make their own reproductive choices, regardless of income.

The fund provides financial assistance and emotional support to individuals in need while building community spaces for people who may also need abortions services in Texas.

URGE based in Washington, D.C. is powered by the young and progressive voices of community members who believe they are often overlooked in the fight for sexual and reproductive rights.

URGE focuses on pushing policies that help to protect people in the LGBTQIAÂ  community while providing affordable access to abortion coverage and democracy reform. The organization also pushes for sex-ed programs in addition to economic justice for immigrants.

Sister Song is a Southern-based, national membership organization; whose purpose is to build an effective network of individuals and organizations to improve institutional policies and systems that impact the reproductive lives of marginalized communities.

The organization created its Birth Care Fund last year in response to the COVID-19 pandemic that provides relief funds that are intended for Black and other birthing people of color, especially Queer and Trans folks in need of support during their pregnancy and within one year postpartum.

In Our Own Voice is a national-state partnership focused on lifting up the voices of Black women leaders at the national and regional levels in the fight to secure Reproductive Justice for all women, femmes, and girls. The organization fights for contraceptive equity, abortion rights, and comprehensive sex education among other issues.

The Afiya Center (TAC) was established in response to the increasing disparities between HIV incidences worldwide and the extraordinary prevalence of HIV among Black womxn and girls in Texas. TAC prides itself on being the only reproductive justice organization in North Texas founded and directed by Black womxn.

The organization also offers a number of resources on maternal mortality and abortion access.