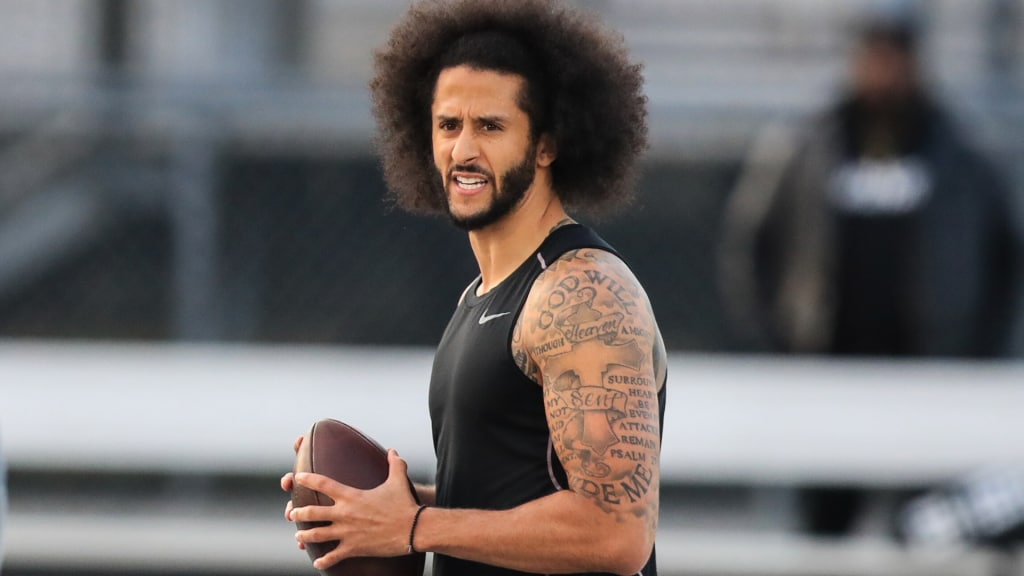 Colin Kaepernick has not played in the league for the past four seasons.

The Viewâ€™s Joy Behar believes that Colin Kaepernick should be re-hired by the NFL in the wake of Las Vegas Raiders coach Jon Gruden‘s resignation.

Gruden resigned from his position on Monday after racist, homophobic, and misogynist emails of his were leaked. On Wednesdayâ€™s episode of The View, veteran host Behar said that Kaepernick being offered a job by the NFL would be a gesture of good faith.

Kaepernick took a knee during the 2016 NFL season as â€œThe Star-Spangled Bannerâ€� played to bring awareness to Black people being killed by the police. The now-retired quarterback believes the move caused him to be blackballed from the league.

Kaepernick sued the NFL for collusion that he alleged kept him from signing with one of the league’s 32 teams; the case was settled in February 2019. Behar suggested that the two sides should come together once more.

â€œIf they really wanna clean up their act, they should hire Colin Kaepernick,â€� Behar said. â€œWhy is he out of a job while all of this is going on?â€�

â€œWouldnâ€™t that be a good way for them to clean the palate?â€� Behar asked.

Despite the fact that Kaepernick has not played in the league for the past four seasons, Hostin shared that the athlete told her that heâ€™s still capable on the field at 34, and that he is â€œready to take another football team to the Super Bowl today.â€�

The Gruden controversy erupted after The Wall Street Journal reported that one of his emails contained a racist remark about NFL Players Association executive director DeMaurice Smith.

â€œDumboriss Smith has lips the size of michellin tires,â€� Gruden allegedly wrote in 2011 during his time as an ESPN analyst.

Gruden initially denied that he had any racist feelings before more offensive emails leaked. More than 650,000 emails were reviewed by order of NFL commissioner Roger Goodell, whom Gruden also criticized in his emails, as part of an investigation of the Washington Football Team on workplace misconduct.

Gruden labeled Goodell â€œa â€œfâ€”tâ€� and a â€œclueless anti-football pâ€”y,â€� and referred to then then-vice President Joe Biden as a â€œnervous clueless pâ€”y.â€� He further complained that Goodell pressured Rams coach Jeff Fisher to draft “qâ€”rs,â€� in reference to Michael Sam, who publicly came out during the 2014 season.

He also wanted offensive tackle Eric Smith, who also participated in the kneeling, to be fired. Furthermore, Gruden spoke against women being hired as referees and shared images of topless women with Bruce Allen, then president of the Washington Football Team.

Gruden promptly announced his resignation after the batch of new email revelations.

â€œI have resigned as Head Coach of the Las Vegas Raiders,â€� he said on Twitter in a statement issued by the team. â€œI love the Raiders and do not want to be a distraction. Thank you to all the players, coaches, staff, and fans of Raider Nation. Iâ€™m sorry, I never meant to hurt anyone.”

Kaepernick has not made any public statements in response to the Gruden fallout.

Have you subscribed to theGrioâ€™s podcast â€œDear Cultureâ€�? Download our newest episodes now!

The post ‘The View’s’ Joy Behar: NFL should hire Kaepernick as ‘palate cleanser’ after Gruden scandal appeared first on TheGrio.

Floating Cars, Submerged Buildings and NO Power – Floridians Speak on the Wrath of Hurricane Ian | EURweb