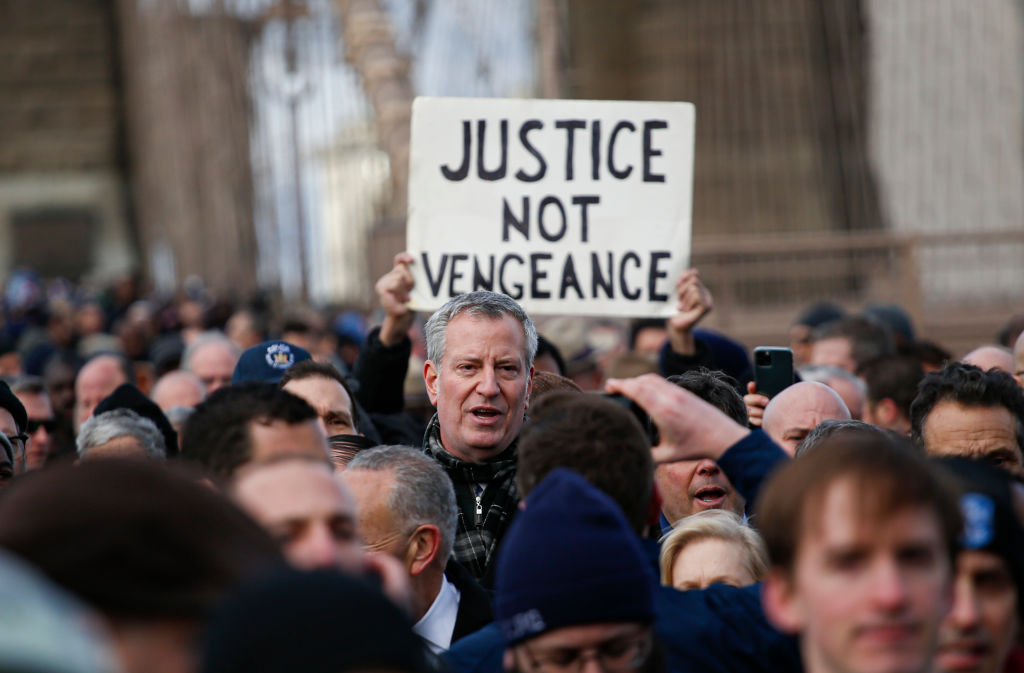 New York City is bracing for come Monday as a COVID-19 vaccine mandate looms and thousands of municipal workers remain unwilling to get the shots.

Thatâ€™s the possibility New York City is bracing for come Monday as a COVID-19 vaccine mandate looms and thousands of municipal workers remain unwilling to get the shots.

Police officers, firefighters, garbage collectors, and most other city workers faced a 5 p.m. Friday deadline to show proof theyâ€™ve gotten at least one dose of the COVID-19 vaccine.

Workers who donâ€™t comply will be put on unpaid leave starting Monday.

Mayor Bill de Blasio held firm on the mandate even as tempers flared on Friday with six firefighters suspended for taking a fire truck to a lawmakerâ€™s office and threatening his staff over the vaccine mandate.

The incident was a dramatic escalation after firefighters and other workers rallied Thursday outside de Blasioâ€™s official residence, sanitation workers appeared to be skipping garbage pick ups in protest and the cityâ€™s largest police union went to an appeals court seeking a halt to the vaccine requirement.

De Blasio said Thursday that the city has contingencies to maintain adequate staffing and public safety, including mandatory overtime and extra shifts â€” tools that he said were typically used â€œin times of challenging crisis.â€�

The mayor called the sanitation slowdowns â€œunacceptableâ€� and said the department will move to 12-hour and begin working Sunday shifts to ensure trash doesnâ€™t pile up.

â€œMy job is to keep people safe â€” my employees, and 8.8 million people,â€� de Blasio said at a virtual news briefing. â€œAnd until we defeat COVID, people are not safe. If we donâ€™t stop COVID, New Yorkers will die.â€�

People who refuse to get vaccinated are now a big factor in the continued spread of the virus. Backers of mandates say New Yorkers have a right not to be infected by public servants unwilling to get the shots.

Mandates have gotten support in the court systems as well, as on Friday, when a federal appeals panel upheld New York stateâ€™s vaccine mandate for health care workers.

Nearly one-fifth of city employees covered by the impending city mandate had yet to receive at least one vaccine dose as of Thursday, including 21% of police personnel, 29% of firefighters and EMS workers, and 33% of sanitation workers, according to city data. City jail guards have another month to comply.

As of 8 p.m. Thursday, 33,400 city workers remained unvaccinated. The city said it would provide updated vaccine rates on Saturday.

The fire department said it was prepared to close up to 20% of its fire companies and have 20% fewer ambulances in service while changing schedules, canceling vacations, and turning to outside EMS providers to make up for expected staffing shortages.

â€œThe department must manage the unfortunate fact that a portion of our workforce has refused to comply with a vaccine mandate for all city employees,â€� Fire Commissioner Daniel Nigro said.

Police Commissioner Dermot Shea, who had COVID-19 in January, said his department was sending reminders to workers whose records indicated they hadnâ€™t yet received a shot and that NYPD vaccination sites will remain open all weekend. Shea said thousands of officers whoâ€™ve applied for medical and religious exemptions will be allowed to work while their cases are reviewed.

Nearly 1,000 officers were vaccinated on Friday alone, the NYPD said, rushing to meet the deadline for the mandate and an extra incentive: workers who get a shot by Friday will get $500.

â€œOn Monday, when this thing really starts being enforced, weâ€™re going to check the vaccination status and if youâ€™re not vaccinated, no pay and youâ€™re going to be not able to work,â€� Shea said in a video message Wednesday to officers. â€œI donâ€™t think anyone wants that to happen. I donâ€™t think you want it to happen. I certainly donâ€™t. We need you out there.â€�

Fire department officials are holding virtual meetings with staff, imploring them to get vaccinated.

A Staten Island judge on Wednesday refused a police unionâ€™s request for a temporary block on the mandate, but she ordered city officials into her courtroom next month to explain why the requirement shouldnâ€™t be reversed. If the mandate is deemed illegal, workers put on leave will be given back pay, the city said.

Mike Salsedo, 44, was among hundreds of firefighters protesting Thursday outside de Blasioâ€™s residence, Gracie Mansion. He said he believes he has natural immunity to COVID-19 after having the disease last year and doesnâ€™t need to be vaccinated, a stance thatâ€™s contrary to the consensus among public health experts.

â€œIâ€™m a man of faith, and I donâ€™t believe that putting something manmade into my body is good,â€� Salsedo said.

Another firefighter, Jackie-Michelle Martinez, said the ability to choose was â€œour God-given rightâ€� as she questioned the cityâ€™s decision to move away from its previous policy, which allowed workers to stay on the job if they had a negative COVID-19 test.

â€œIf the weekly testing is working, why are you, Mayor de Blasio, eliminating it?â€� she asked.

COVID-19 is the leading cause of death of law enforcement officers in the U.S., killing 498 officers since the start of 2020 compared to 102 gun deaths, according to the Officer Down Memorial Page, which tracks police fatalities.

De Blasio on Thursday credited the impending deadline for moving the needle on vaccinations across city government. In the last week, the number of affected workers whoâ€™ve gotten at least one dose rose from 71% to 79%.

When the state required all workers at hospitals and nursing homes to get vaccinated, a last-minute rush of people to comply meant that a few facilities experienced staffing challenges.

â€œWe expected that a lot of the vaccinations would happen toward the end of the deadline,â€� de Blasio said. â€œWe also know a lot of people make the decision once they really realize that theyâ€™re not going to get paid. Thatâ€™s just the human reality.â€�

Have you subscribed to the Grio podcasts, â€˜Dear Cultureâ€™ or Acting Up? Download our newest episodes now!
TheGrio is now on Apple TV, Amazon Fire, and Roku. Download theGrio today!