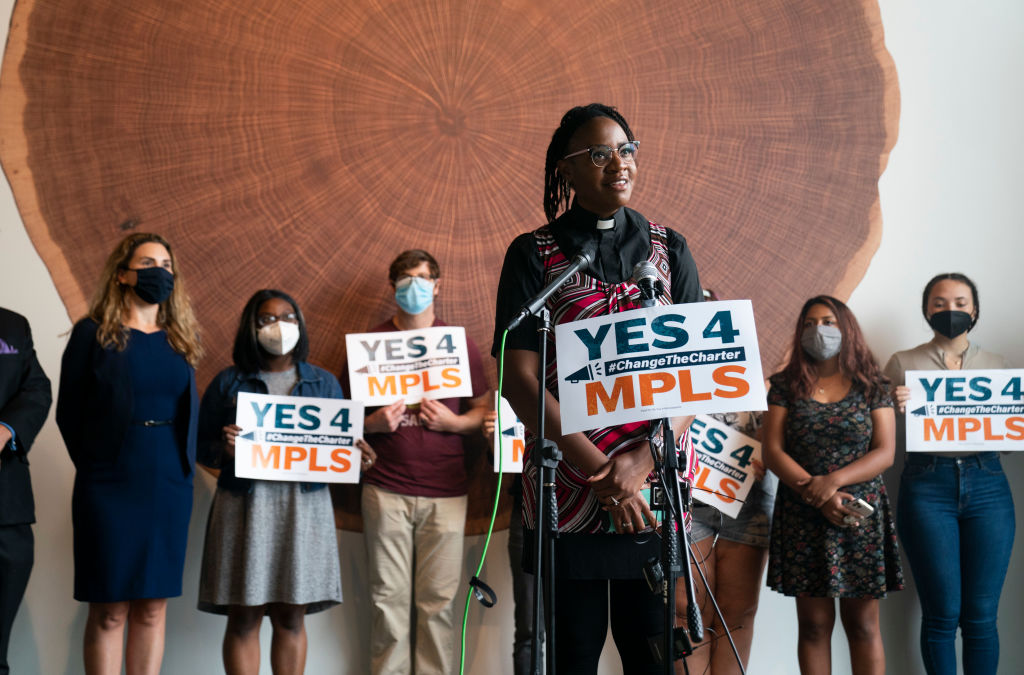 In Tuesday’s election, Minneapolis voters have a chance to change the way the city handles public safety.Â  Organizers like Miski Noor want voters to embrace the opportunity to change how the city deals with public safety and vote in favor of the public safety amendment known as Question 2.Â

And… that’s it, early voting is done. We have 13 MORE HOURS to vote #YesOn2: 7:00am to 8:00pm tomorrow. Get out and vote, bring your family, bring your friends, bring your neighbors. We’re almost there, let’s #KeepGoing.

Noor, an organizer with Black Visions, spoke with NewsOne over the weekend in between get out the vote events. Reflecting on the energy of early voters in line to cast their ballots Saturday, Noor says Minneapolis has been waiting for this change.Â

“There has been research, there have been studies, and different committees that have been formed,” Noor began. “It is literally the only police department that is set up this way in the entire state.”

They explained that the charter., enacted in 1961, was set up so that it shields the police department from meaningful accountability. Last year when city council members pledged to disband the Minneapolis Police Department, it was a direct result of lobbying from community organizers.Â

According to Noor, the campaign to change the city charter was ultimately a heavy lift for the community. Mobilizing after the charter commission squashed a vote from taking place last year, the community engaged in what they call an even “more democratic” process.Â  Â

Black Visions is among the dozens of organizations that make up the Yes 4 Minneapolis coalition, a community-led movement committed to reimagining public safety in the city.Â

Capturing the energy and sustaining involvement beyond elections can be a challenge. But Noor says the election is just one tactic in their organizing. “Our work does not end on election day, and our work is about building power and transforming ourselves and the world,” Noor said. For Black Visions, the public safety charter amendment is a part of ongoing organizing they are engaged in, such as the “Path Forward” campaign.Â Â

Part of that work includes organizing People’s Movement Assemblies, local convenings that engage community members around common issues to identify next steps and methods of redress. More than neighborhood meetings, people’s assemblies offer an opportunity for deep engagement on issues to develop collaborative outcomes and points of advocacy. In some ways, they can serve as a road map for accountability and co-governance. Â

“Those conversations have really been seeding what could come next,” Noor said. “And then when this amendment passes, the first thing that happens is that within the first 30 days, a Department of Public Safety Commissioner is appointed.”Â

The new department will report to the city council, but the mayor will have some say in the appointment. While some residents have expressed concerns about what it means to disband the police department and establish a Department of Public Safety, Yes 4 Minneapolis offers a quick guide to how the update will work in practice.Â

Cheat sheet for what #YesOn2 will do! Study up & make your voting plan here: https://t.co/ZbBPjdbW2z https://t.co/yjKvPXPUk5

“It is actually a bunch of people flexing our muscle of governance and decision making with each other so that we do get to make decisions about our lives,” Noor explained. “And so that we are the ones who are framing that and not just taking infrastructure and bureaucracy that doesn’t actually work for us.”Â

According to the campaign team, in the days leading to the final weekend before Election Day, Black Vision organizers and volunteers knocked over 20,000 doors and made close to 8,000 calls. The campaign engaged 2,000 volunteers in phone banking and canvassing. It also sent over 38,000 text messages as of last Friday.Â  Â

The Yes on Question 2 campaign also has support from several elected officials, including Minnesota Attorney General Keith Ellison, Hennepin County Commissioner Angela Conley, state Sen. Omar Fateh, state Rep. Aisha Gomez and state Rep. Esther Agbaje.Â  The Sahan Journal reported that the majority of elected officials who support the measure are people of color. According to the outlet, Ellison was an early supporter of the measure.Â

“We often look back in history admiringly at courageous leaders who stood for progress & justice – despite opposition,” tweeted Ellison. “In midst of the battle, their courage and vision are not always obvious to all. How can we muster vision, faith courage to act when it matters most?”Â

We often look back in history admiringly at courageous leaders who stood for progress & justice – despite opposition. In midst of the battle, their courage and vision is not always obvious to all. How can we muster vision, faith courage to act when it matters most? #voteyesonQ2

With the support of national organizations like the Movement for Black Lives and the Working Families Party, Minneapolis organizers like Noor have expanded their reach and community contacts. Instead of “parachuting in,” these organizations followed local leadership and supported local democratic practice strengthening local leadership.Â

“Everybody got invested in Minneapolis last year,” Noor continued. “The uprising in our city spread across the country, and then the world. And we know for a fact that we never win alone. We win with each other.”Â Â