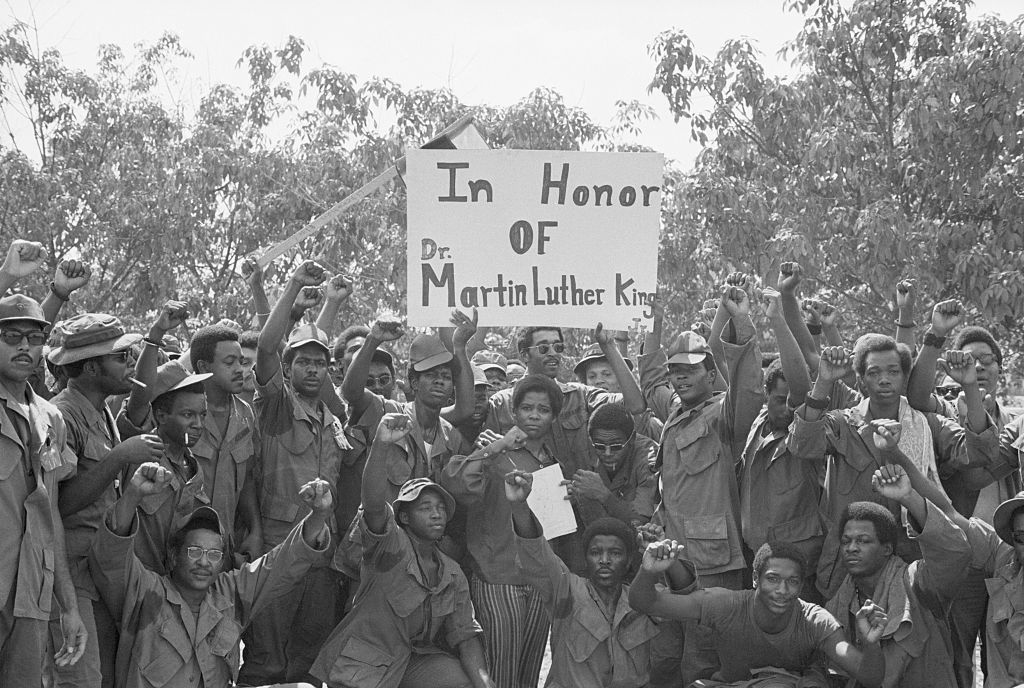 Black veterans have a unique perspective on America, patriotism and protecting Democracy. Recognition of their service and commitment cannot be relegated to a single day. Â

While Veteran’s Day has come and gone, the dedication to community remains. For Jason Dozier, that dedication led to a run for local office. A candidate to represent Atlanta’s 4th district in the city council, Dozier spoke with NewsOne about being a Black veteran amid contemporary battles to protect Democracy. Â

Previously serving tours of duty in Iraq and Afghanistan, Dozier is resolved to give back to the country and communities that raised him. And while he no longer wears a uniform, Dozier’s commitment to serving his community remains. Â

Can you share with us your thoughts on being a Black veteran in the current moment?Â

Last year, I had difficulty meaningfully articulating my disillusionment in the wake of the deaths of George Floyd and Rayshard Brooks.Â  Emotionally, mentally, and spiritually, the summer of 2020 was one of the toughest I’ve ever experienced. I’ve felt disappointment in our country over the years. Its leaders. Its policies. Â

And I’d always believed the failure was with the people themselves. I’d gotten used to the appointed officials who abuse their limited powers; to the clout-chasing elected officials who show up for the cameras but not when communities need to be uplifted; to jaded apparatchiks who can’t stand to be a bit mildly inconvenienced.

But those have always been given; archetypes that you end up just working around as best as you can in your work to build a better future for your community. But last summer felt so different. It was the first time I’ve felt disillusioned, and the feeling of resignation and resentment that comes with that was tough to overcome.Â

While I was trying to find my words to express my thoughts and feelings, I stumbled on a New York Times op-ed written by Christopher Paul Wolfe that still resonates with me:Â

As a black veteran, I find it hard to reconcile my pride in my service with a sense of collaboration in upholding my country’s legacy of white supremacy while deployed. I still remember the black and brown faces of Iraqis that I helped to round up, zip-tie and detain using tactics similar to stop and frisk, the use of which some courts in America have found to be unconstitutional. These experiences created a moral chasm with which I continue to grapple.Â

AndÂ soÂ I think that sums up why I found last summer so painful.Â

I live less than a mile where law enforcement officers gassed, kettled, and tased protesters and bystanders who were marching in the streets of Downtown Atlanta. I also live less than a mile from where Garrett Rolfe killed Rayshard Brooks. Being so physically central to all of this made it more difficult for me to comprehend what was happening.Â

In the end, the core of my disillusionment came from the fact that our institutions failed and that it was hard for me to cope with that. For weeks I’d been stuck trying to figure out how to articulate that realization in a meaningful way, and I’m still struggling with that. Â

And I think that’s what weighs on me most of all. People and policies have always come and gone, but the institutions were what I’d always valued. It’s how I’ve squared the circle of my military service despite my disagreement with the policies we were carrying out. That the Army, as an intuition, offered people like me a chance at middle-class prosperity despite centuries of system racism.Â

Veterans are often thanked for their service in defending Democracy. What are your thoughts on the current state of Democracy?Â

I’m usually one of the first to remind others that service to our country and our Democracy is not limited to service in the military. I’ve always thought that the elevation of veterans in this way, unfortunately, diminishes the work of people serving through work in nonprofits, as educators, as healthcare workers, or other segments of our society that are instrumental in the health and well-being of our society. And ultimately, the saturation of veteran worship can further exacerbate the divide between civilians and the military, a wholly unhealthy divide for our Democracy.Â

While veterans and the military play a role in protecting and preserving our Democracy, these aren’t the only institutions that do so. And for a democracy to remain healthy, we must invest in *all* of our institutions in the same ways that we invest in our military.Â

From your perspective, what is needed to protect and expand Democracy?Â

We must protect our institutions from the malice and negligence that have weakened them for decades.Â Â

As a candidate for local office, what do you think people know about participating in local elections?Â Â

On the one hand, people know when systems are broken because these failures become part of our lived experiences. Sometimes they’re just nuisances we learn to live with–late buses missed trash pickup, delayed permits. But often, these failures can have disastrous consequences, or even can be deadly–lost income, illegal evictions, encounters with the police. And so people lose hope, and they disconnect. They lose confidence in their leaders and the systems they claim to represent, and it’s difficult to restore that trust. And so, for many people, they choose not to participate in local elections at all.Â

It’s been my life’s work to serve others, and I’m asking you for your support today so that I can make it our city’s work. pic.twitter.com/G4aL3C1nnJ

On the other hand, we don’t do a good enough job communicating with or educating our citizens on how local government works and how their voices can be heard in the first place. The existing mechanisms for community engagement are catered to wealthy homeowners who have enough time to attend Neighborhood Planning Unit meetings.

Fifty residents might attend a meeting for a community with over 20,000 people, and that’s considered a job well-done for too many of our city agencies. And that creates a further disconnect. Many people don’t know where our political boundaries begin or end, let alone who to complain to or vote out of office when they’re dissatisfied.Â