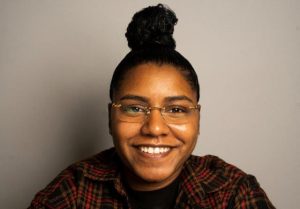 There are media personalities/ journalists and then there is “Swaggy Sie.”

The Brooklyn native’s uncanny ability to candidly connect with artists and celebrity guests during interviews is bar none. Some of those include Cardi B, Gunna, Doja Cat and the late Pop Smoke to name a few. With under 10 years of industry experience, the journey to this seasoned status certainly did not happen overnight.

It began when Sienna “Swaggy Sie” Garraway was offered an internship at 50 Cent’s G-Unit record label. How does a 16-year-old score an internship at the house that Curtis “50 Cent” Jackson built?

Her high school’s internship program awarded the opportunity but Swaggy Sie made sure to make the most out of it. As she recalls the time period sonically, she references Lloyd Bank’s hit song “Beamer Benz & Bentley” to chronologize her period at G-Unit.

“Shoutout to Dre Mckenzie who took me under his mentorship during the time” she says. My duties were wide-ranging. I used to run to get jerk chicken and rice and peas for Lloyd Banks. I used to burn 6-7 beat CDs for G-Unit artists. That’s 50, Banks, Kid Kid, Yayo- all of them. I managed fan mail for 50 as well.”

While a G-Unit internship was her first exposure to the music industry, it would only be the tip of the iceberg as her attedance as an undergrad student at Long Island University would lead to her next opportunity.

She would later get in contact with LIU Post alumnus, Simone Whitney, whose 11-year career at Sirius XM saw her as her as a on-air host, DJ, music programming coordinator and voice over artist.

“I reached out to Simone Whitney and simply told her: ‘I’m a fan of what you do and the work you put. If you ever need an intern let me know.’

After months of constant follow-ups, she finally received the response she had sought out with her initial introduction.

“Eventually, she did need an intern and they ended up giving me the internship at Shade 45,” Garraway says.

For the next six months, Swaggy Sie did any and everything she could to display her unparalleled work ethic. The hard work would pay off as she was promoted to the music coordinator for various stations on Sirius XM and later music director.

She credits Radio Hall of Fame inductees Sway Calloway (Sirius XM colleague) and Angie Martinez for their longevity, continued inspiration and excellence throughout their careers.

“Everything Sway does is with integrity. I have learned and absorbed so much from him since knowing him as an intern,” said Garraway.

For Angie Martinez: “While growing up in New York City, the first voice you hear when you turn on the radio is, Angie Martinez,” she says. “When she came to the station to promote her book and her new show, I knew I had to get time to speak with her. I appreciate Angie for that moment to interview her because she is one of my main influences in media and radio.”

She also speaks to cherishing her interviews with late Brooklyn rapper Pop Smoke which happened to be one of his first interviews and one of his last.

“With Pop (Smoke) he had no worry about what or how he said something. I appreciate that because you don’t get too many of those raw interviews,” said the Brooklyn native.

At the top of her game, Swaggy Sie holds the desire to continue the everlasting growth and expansion of her craft and brand in more ways than one. Given her elite work ethic, the sky is not the limit, but only a point a view.