Advocates call out double standard in Black migrants vs. Ukrainians under US immigration policy 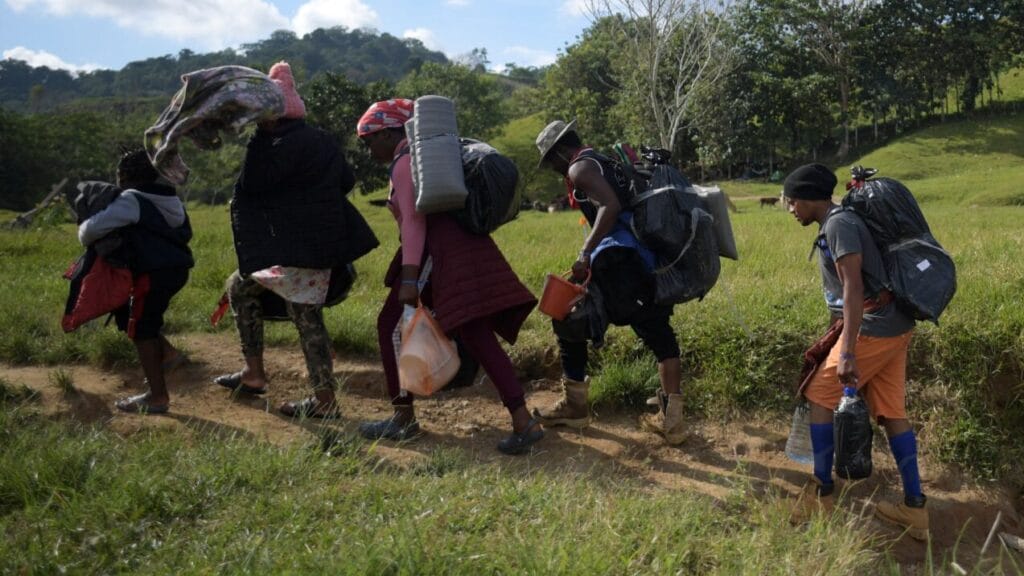 As the Biden administration moves to lift Title 42, some remain concerned about Haitian and African refugees getting the short end of the stick.

As President Joe Biden moves to lift the Trump-era Title 42 by May 23, advocates and elected officials are publicly inquiring about the impact of the pandemic-related restricted immigration policy on Black migrants – especially as the nation continues its focus on Ukraine and Ukrainian refugees.

The move to terminate Title 42 under guidance by the Centers for Disease Control and Prevention (CDC) will halt the deportation of migrants under the directions of the public health program intended to safeguard against COVID-19.

But some critics of Title 42 remain skeptical that its lifting will end what they have long characterized as racial discrimination against Haitian and African migrants seeking asylum in the United States.

Nana Gyamfi, Executive Director of Black Alliance for Just Immigration (BAJI), told theGrio, that while the Biden-Harris administration will soon end the controversial program, thousands of Black migrants stand to be deported between now and then.

“We have another two months where Black folks are going to continue to be expelled. Over 22,000 Haitians alone have been expelled since Sept. 19, just kicked out of this country without even having their right to request asylum being honored,” said Gyamfi.

Referring to the government’s Migrant Protection Protocols policy and its expansion under the Biden administration, Gymafi added, “We can see the shifts already that the administration is making in anticipation of making it continue to be difficult for Black asylum seekers. So they’re already holding Haitians, for example, as part of the remain in Mexico part two.”

The Migrant Protection Protocol, a policy established by the Trump administration, sent migrants from mostly Central America seeking admission to the U.S. from Mexico back to Mexico while they waited for their asylum cases to move forward. After the Biden administration signaled it terminate the policy, a Texas court ordered its reinstatement. The Biden administration has since continued the program and expanded it to include all migrants in the Western Hemisphere other than Mexico.

Additionally, the Biden administration announced new rules that would empower asylum officers to grant or deny asylum claims for those arriving at the border, not just immigration judges.

“We already have the metering system that existed before Title 42 that was used to keep Black asylum seekers from being able to come into the country. We see these new proposed rules for asylum, which is going to make it even easier and faster for Black folks to be denied and sent back to the countries that they fled,” said Gyamfi.

“I’m expecting that the next two months before Title 42 officially ends, if in fact that happens, that we’re going to see them continue to set up the way in which they have other invisible walls as they call them policy…keep people from coming through.”

Title 42 has been criticized for its racial unfairness to immigrants seeking refuge and asylum in the United States. Critics of the policy include Haitian and Caribbean immigration advocates and even Black lawmakers.

These critics are also decrying racial unfairness in U.S. immigration policy that continues to deport Black migrants in moments of global humanitarian crises in their native countries – even though the Biden administration is allowing non-Black refugees into the United States from war-torn countries like Ukraine and Afghanistan.

At the White House last week, House Foreign Affairs Committee Chair, U.S. Rep. Gregory Meeks, told theGrio exclusively, “I don’t think we should have one group over another. That is why we continually are fighting to make sure we have immigration reform.”

The New York Congressman went on to say that those at the southern border “should have the right to be interviewed so they can have asylum like everyone else,” adding all migrants, no matter their nationality, should be treated “fairly and equitably.”

More people are drawing parallels to the plight of Haitian and African migrants being turned away from the United States’ borders as 100,000 refugees from Ukraine are being brought into the country.

More than four million Ukrainians have fled the country since the beginning of the Russian invasion. Haiti, which is facing pervasive lawlessness at the hands of gangs after the assassination of its former president, is considered the poorest country in the Western Hemisphere. It is also still recovering from a devastatingly deadly earthquake.

It’s this backdrop that Gyamfi emphasized, “Immigration is a racial justice issue.”

“It is unconscionable when you think about the fact that there are tens of thousands of Black asylum seekers who have gone through what I call a journey of death, of different types of death to get to the border between the United States and Mexico, who have been held there, literally held captive, and unable to come to the country that they were told, reaches out and takes in those who are fleeing danger and who need assistance,” said Gyamfi.

Congressman Meeks said the U.S. has “a lot of work still to do,” adding, “I want to make sure that our Haitian brothers and sisters and those that are coming in from the southern border, …[and] coming from the continent of Africa, that they have equitable opportunities. If they’re seeking refuge because of [they’re] running from a fear of their lives, they should be given the same opportunity.”

The issue of Haitian deportations versus Ukrainian deportations – which the U.S. halted after citing the war in Ukraine as a “humanitarian crisis” – was said to have been one of many issues raised during a White House meeting between President Joe Biden and senior members of the Congressional Black Caucus in early March. Now advocates are sounding the alarm around letting Haitian and African refugees into the United States, just as they have for Ukrainians.

“While the Haitian and other Black asylum seekers are being restricted to Mexico, are being whipped by men on horses as they try to come into this country seeking help, you have Ukrainians who are being allowed to come freely,” said Gyamfi.

U.S. Congressman Mondaire Jones of New York, a member of the House Haitian Caucus, told theGrio that while “no one is saying our policy on Ukraine is wrong,” the Biden administration has to “do better.”

“The fact is that Black people and people of color generally have always, in the history of this country, been treated worse in the immigration context when it comes to our immigration policy than white people. That is just a fact,” said Jones. “There’s no avoiding that conclusion when you consider that the people of Haiti had been experiencing a humanitarian crisis after a humanitarian crisis.”

Activist and Sirius XM host Joe Madison also weighed in on the issue, telling theGrio, “nobody should be turned away.”

The post Advocates call out double standard in Black migrants vs. Ukrainians under US immigration policy appeared first on TheGrio.