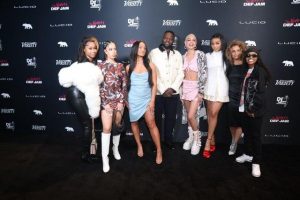 “The Women Of Def Jam” paid tribute to Def Jam’s iconic female musicians, both past and present, and brought together the label’s entire female executive team, personnel, and VIP guests to recognize their incredible accomplishments to the brand and the industry at large. Def Jam employs one of the most diverse and inclusive groups of female executives in the music industry today at every level of the company.

Def Jam artists Kaash Paige, Kendra Jae, DaniLeigh, Pap Chanel, Nevaeh Jolie, and Ilham were in attendance, as was a “Future Leaders” panel led by Variety editor Shirley Halperin and featured some of the label’s youngest and brightest workers. The evening came to a close with a beautiful performance by Coco Jones of her new single “Caliber,” which she performed afterward by Def Jam chairman and CEO Tunji Balogun. DJ Rosegold kept the party rolling with Def Jam’s extensive discography tunes.

Women make up more than half of the Def Jam workforce, with seven women of color holding senior leadership positions. Women make up two of the three executive leaders. Eight of the ten department heads are female. In addition, Def Jam has an all-female marketing team for the first time since 2007. And Def Jam has never had as many female A&R executives as now.

You can see images from the event below.

The post Def Jam Hosts ‘The Women of Def Jam’ Celebration and Release Compilation Album appeared first on The Source.