Magic Johnson on Learning to Accept His Gay Son EJ: ‘He Changed Me’ 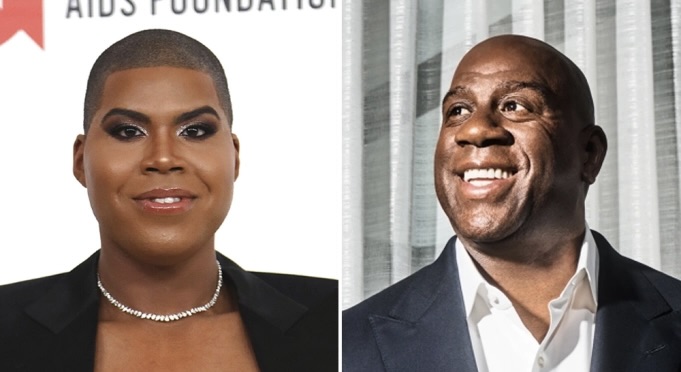 Magic Johnson is one proud father to his son Earvin “EJ” Johnson.

The year was 2010, and scarves were in. “Very European,” says EJ Johnson, the son of Magic Johnson, as he recalls when he came out as gay to his father. “Even in the summer, you had your linen scarves. That was the look. And of course I was rocking the scarves, because it was hot. And he just could not stand it. ”

In a new interview with Variety ahead of the April 22 release of “They Call Me Magic,” an Apple TV Plus docuseries that covers his life and career, Johnson revealed that he initially struggled to come to terms with his son’s sexual orientation.

“When you grow up in team sports, you’re thinking, ‘Is he gonna play sports?’” Johnson says. “And then when I saw that he liked dolls and to play dress-up … ‘What are you doing?’”

“I was out to all my friends,” says EJ, who is now 29. “[My parents] were the last people that I really had to talk to about it. It wasn’t new for me, but they had to really take that in and digest it. Especially my dad, because he was really the last person to talk to. I think it was just a lot for him to swallow in that conversation. A lot of just going back and forth. And he just was rattling off about things that weren’t particularly nice. But he’s not somebody who works great being cornered or surprised.”

“He’d come up with stupid rules: ‘No scarves in the house,’” EJ continues. “But it’s really not about scarves; it’s really about him seeing you be you.”

Tensions were high in the Johnsons’ Beverly Hills home. For EJ, 17 at the time, those were his last few months with his family before he set off for newfound independence at NYU. But soon after, Johnson visited him in New York, and the two repaired their relationship.

“I had only been gone for two months,” EJ says. “He picked me up at my dorm and I was like, ‘Oh, whatever, hey.’ And he hugged me so hard — he was, like, squeezing all the air out of me. That’s when I knew, there’s nothing but love here.”

In 2013, after TMZ published photos of EJ in a black boa holding hands with a male friend, he decided to come out publicly. Now, fans from the LGBTQ community regularly reach out to EJ and his parents — Magic and his mom Cookie — to express their gratitude for how the family has embraced the community, as well as for Johnson’s HIV/AIDS activism.

Cookie recalls: “I remember a young man came up and said to me one day, ‘I really want to thank you and your husband for what you’re doing. I’m gay, but I didn’t want to tell my parents. When I went away to college, I got [HIV]. But with you guys talking about this, bringing it to everyone’s attention, it’s made me feel I’m gonna be okay, and I’m going to fight harder.’”

But not everybody has been so accepting. “You get the other side too,” Johnson says. “A lot of people don’t love that I love my son.”

Still, that doesn’t matter to Johnson. “He changed me,” Johnson says of EJ. “He was so proud. This dude here is just so proud of who he is.

“As I grew older, as my wife talked to me, I couldn’t [judge EJ]. I had to accept who he was and who he wanted to be. He actually helped me get there. Because he was so proud. Cookie said, ‘Look in the mirror.’ I said, ‘You’re right.’ Because I’m proud of who I am. And he got it from me.”

“They Call Me Magic,” releases exclusively on Apple TV Plus April 22nd.

The post Magic Johnson on Learning to Accept His Gay Son EJ: ‘He Changed Me’ appeared first on LOVEBSCOTT.