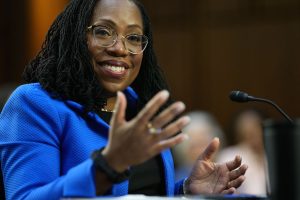 New Jersey Senator Cory Booker is standing behind Supreme Court nominee Ketanji Brown Jackson in an epic speech delivered yesterday before the Senate Judiciary Committee. The NJ senator even brought the historic candidate to tears during his six-minute speech on Wednesday.

At one point during that questioning, Jackson could be seen wiping away tears as Democratic Senator Cory Booker of New Jersey talked about what this moment in history means.

Senator Booker shared, he wouldn’t let Republicans steal his joy from the process, calling Jackson his “harbinger of hope.” He ended his speech by saying the greatest country in the world will be better once Jackson is seated on the Supreme Court.

Supreme Court nominee Ketanji Brown Jackson just finished her final round of questioning Wednesday after being grilled by numerous members of the Senate Judiciary Committee over several days of confirmation hearings. If confirmed, Jackson would be the first Black woman to sit on the nation’s highest court.

The Committee is scheduled to vote on Jackson’s nomination on April 4th.