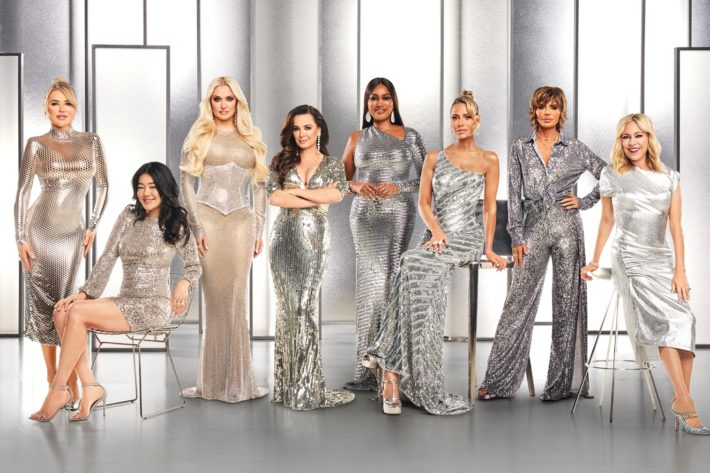 Bravo has debuted the trailer for the highly-anticipated twelfth season of “The Real Housewives of Beverly Hills.” The new season is set to debut on May 11.

The supertease opens up with a montage of the cast’s disembodied voices, shrieking, crying and shaking with warning shots like, “She’s not who she says she is,” and, “It’s my life to burn down.”

The entire season 11 lineup — Kyle Richards, Lisa Rinna, Erika Jayne, Dorit Kemsley, Garcelle Beauvais, Sutton Stracke and Crystal Kung Minkoff — returns, joined by Diana as a diamond-holder and a new “friend of” in Sheree Zampino, ex-wife of Will Smith and close pal of Garcelle. Kathy Hilton is also back in the fold as a “friend of,” though things aren’t looking so hunky dory for the fan-favorite star. In one moment, her sister, Kyle, asks Erika if she’s purposefully trying to make Kathy look bad to take some of the heat off of herself.

“For a year and a half, I’ve been f**king pummeled,” Erika tells the group.

“OK, so that’s why you want Kathy to be called out?” Kyle asks.

“Yes, it is actually,” Erika fires back. It seems this is the much-rumored “takedown” of Kathy after she allegedly used a slur off-camera, at least according to the fan blogs. Kathy has yet to publicly address these rumors, though Sutton was quick to shut down speculation that the word was used to describe her assistant.

The sneak peek then cuts to an unexpected sit-down between Lisa, Kyle and Kathy, with Lisa playing mediator for the sisters. “You said some things about this beautiful sister of yours,” Lisa tells the Hilton family matriarch. “I’m sorry, Kathy. You’re not gonna get away with it.”

“I feel like you hate me or something,” Kyle tells her sister in tears. “How could you say those things?”

Despite her best efforts to shake the spotlight, Erika’s legal woes continue to be front and center — and this time, she’s not holding back how she feels. “I don’t give a f**k about anybody else but me,” she exclaims. In another clip, she nearly explodes on Crystal for her support of “the victims.” For nearly two years now, Erika and her estranged husband, attorney Tom Girardi, have been battling claims that Tom embezzled money meant for various clients, most notably the widows and orphans of an airplane crash. Erika has denied knowing anything about Tom’s business dealings.

“If we’re gonna talk about Erika’s behavior, are we gonna talk about everybody in this group?” Erika goes on to ask Diana, who appears to be her new BFF. Meanwhile, her other bestie, Lisa, seems to be calling out Erika’s coping mechanisms, questioning the pop singer’s prescription pill and alcohol use.

Speaking of Lisa, her story in season 12 might just be her most personal yet, as she processes the death of her beloved mother, Lois, who died just days into production. The trailer features a tear-filled moment between Lisa and her girlfriends, in which the usually stoic soap star breaks down and tells the women, “I’m trying to figure out how to live without my mom.” She confesses to being “in a lot of pain” over the loss.

On top of all that, there’s plenty of “lifestyle” on display, from a ’70s-themed bash, to a Birkin buying party and millions of dollars of jewelry… but the bling can’t distract from all the drama. From shifting friendship dynamics — Garcelle and Crystal seem to be on the outs — to personal confessions and reality shaking life events, including Dorit’s home invasion, season 12 is living up to the “real” in Real Housewives.

Then, there’s the trips: a girls’ getaway to Mexico and an ill-fated outing to Aspen.

“Aspen will never be the same,” Kyle recently confessed to ET. “Honestly, that is my little happy place and people don’t know that we live there part-time. When I went back this last time, I took some sage with me. There was a Ouija board involved. Things really got out of control, lemme tell you.”

“It was really a very intense season,” she added. “A lot of really intense things going on with a lot of the cast members. With Dorit and the home invasion. What Erika’s been going through and other personal things. So, it was a crazy season. When it’s really bad for us, it good for the audience.”

The Real Housewives of Beverly Hills’ new season premieres Wednesday, May 11, at 8 p.m. ET/PT on Bravo

Watch it all play out below.