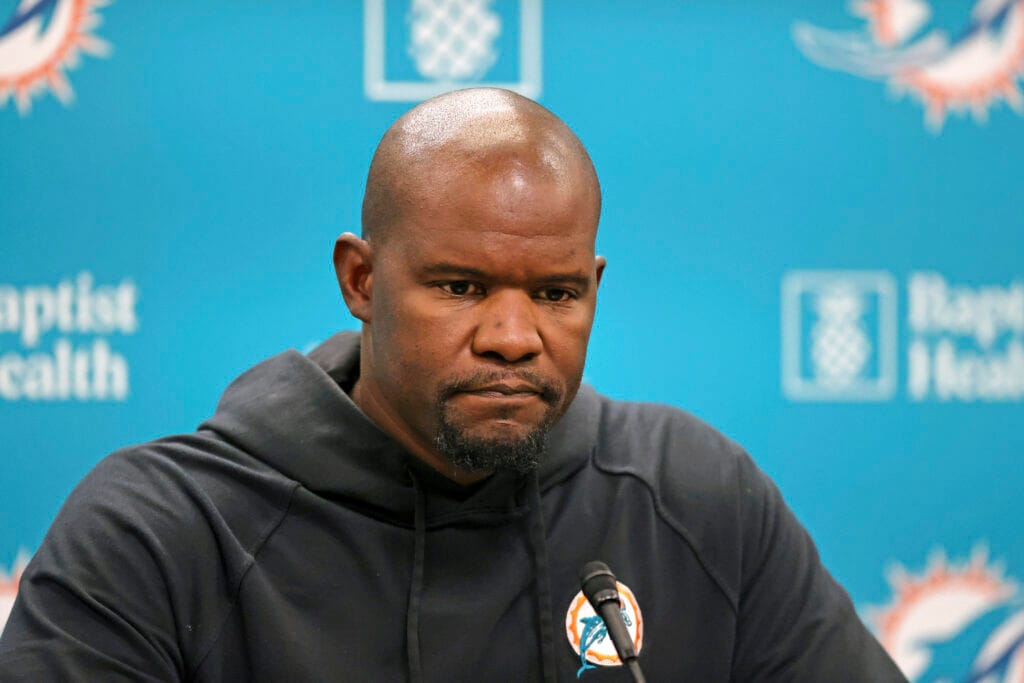 As reported by , per AP, Flores is suing the NFL and three of its teams, “saying racist hiring practices by the league have left it racially segregated and managed like a plantation.” At the end of the regular season, of 32 NFL teams, only one was helmed by a Black coach after Flores was let go – Pittsburgh Steelers head coach Mike Tomlin, now in his 15th season.

Todd Bowles of the Tampa Bay Buccaneers became a head coach last month after the retirement of Bruce Arians, joining Lovie Smith of the Houston Texans and former 49ers offensive coordinator Micheal McDaniel, who is biracial, as the only Black head coaches in the league.

Flores — who currently serves as senior defensive assistant/linebackers coach for the Steelers —claims he participated in “sham” interviews with NFL teams attempting to comply with the Rooney Rule, which requires franchises to interview at least one minority candidate when filling head coach and general manager positions. The NFL, the Dolphins, the Denver Broncos, and the New York Giants are all accused by Flores in the suit.

Amid reports that Horton has been added to the lawsuit, a 2020 podcast interview has surfaced of Mularkey confessing that he participated in the Titans’ Rooney Rule sham. Mularkey admits that the Titans delayed officially announcing his hire as head coach in 2016 so the league could interview Black coaches to satisfy the Rule.

“I allowed myself, at one point, when I was in Tennessee, to get caught up in something that I regret,” Mularkey said on the Steelers Realm podcast. “I still regret it. The ownership there, Amy Adams Strunk and her family, came in and told me I was going to be the head coach in 2016 before they went through the Rooney Rule.

And so I sat there, knowing I was the head coach in ’16, as they went through this fake hiring process, knowing a lot of the coaches that they were interviewing, knowing how much they prepared to go through those interviews, knowing that everything they could do and they had no chance of getting that job.”

Horton has joined Flores’ lawsuit accusing the NFL of racial discrimination when it comes to hiring Black head coaches. Wilks’ legal team claims he was “not given any meaningful chance to succeed.”

“When Coach Flores filed this action, I knew I owed it to myself, and to all Black NFL coaches and aspiring coaches, to stand with him,” Wilks said, in a statement released by his lawyers. “This lawsuit has shed further important light on a problem that we all know exists, but that too few are willing to confront.”

In the amended complaint, Flores’ attorneys allege that their client was offered $100K to purposely lose games by Dolphins owner Stephen Ross. Flores also claims the Houston Texans refused to consider him for their head-coaching vacancy “due to his decision to file this action and speak publicly about systemic discrimination in the NFL.”

“I am proud to stand with Coach Flores and Coach Wilks in combatting the systemic discrimination which has plagued the NFL for far too long,” Horton said in a statement released by his lawyers.