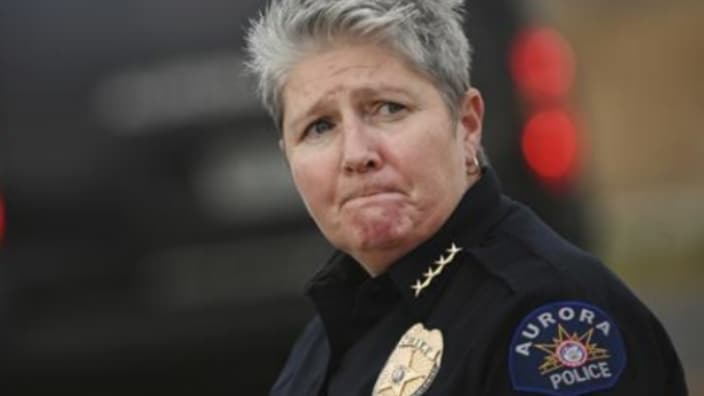 Lawyers for Vanessa Wilson say she was the victim of a campaign to hurt her reputation by city council members opposing reforms.

DENVER (AP) — The Denver suburb where police officers and paramedics have been charged in the death of a Black man in 2019 ousted its reform-minded police chief Wednesday, faulting her management of a department at a time of rising crime and officer departures.

However, lawyers for Vanessa Wilson, who became chief in Aurora in 2020 after the death of Elijah McClain gained new attention amid protests over police brutality and racial injustice following the police killing of George Floyd, said she was the victim of a campaign to damage her reputation by conservative city council members who opposed reforms.

Last year, the city signed an agreement with State Attorney General Phil Weiser to make changes aimed at ending a pattern of racially biased policing and excessive force. Before that, Wilson also acted quickly to discipline and fire officers accused of misconduct, including officers who took and shared photos appearing to mock McClain’s death.

“In an effort to justify getting rid of Chief Wilson, the City and Council have engaged in a conspiracy to leak misinformation to the media and falsely attribute responsibility for the department’s long-standing historical problems to Chief Wilson,” Wilson’s lawyers said.

City Manager Jim Twombly said Wilson excelled in her community outreach work in Colorado’s third-largest city but he said he fired her because of concerns about her leadership and management of the department. He declined to give specific examples other than mentioning a backlog of thousands of crime reports, with the potential to delay investigations and arrests, that he said he first learned about last month, in a list of more general factors contributing to his decision. A report on the findings of a city-commissioned independent audit on the records backlog was issued Tuesday.

“It really comes down to a lack of confidence on my part for her to be able to lead the department,” he said.

Twombly said Aurora would continue to uphold its consent decree agreement with the attorney general, signed in November, but some were skeptical.

“Aurora is already regressing soon after the ink has dried on the consent decree,” said Qusair Mohamedbhai, who represents McClain’s mother, Sheneen McClain, and Kyle Vinson, a Black man who was shown on video being pistol whipped by an Aurora police officer last year.

The state lawmakers who represent Aurora, all Democrats, issued a statement saying Wilson’s firing will set back efforts to eliminate “the department’s longstanding pattern and practice of racist policing.”

“Her firing in the middle of these efforts sends a terrible message to the police force and to the community about Aurora’s commitment to reforming these practices,” they said.