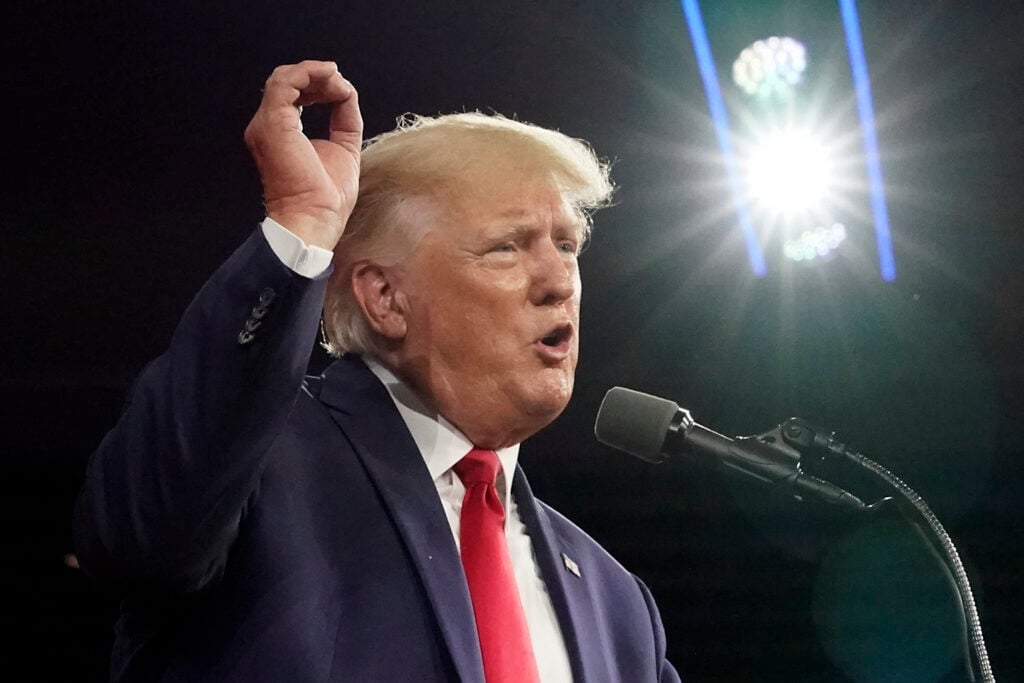 Rejecting suggestions he has lost interest in going after Donald Trump, the Manhattan district attorney said Thursday a criminal investigation into the former president and his business practices is continuing “without fear or favor” despite a recent shakeup in the probe’s leadership.

In a rare public statement, Alvin Bragg denied the three-year-old investigation was winding down or that a grand jury term expiring this month would impede his office’s ability to bring charges.

Citing secrecy rules, the district attorney said he couldn’t discuss details of the probe but pledged to publicly disclose findings when it’s over.

“In recent weeks, the Manhattan District Attorney’s Office has been repeatedly asked whether our investigation concerning former President Donald J. Trump, the Trump Organization, and its leadership is continuing,” Bragg wrote. “It is.”

The Democrat’s affirmation of the investigation was part of a double dose of bad legal news for Trump on Thursday.

It came shortly after the New York attorney general’s office asked a judge to hold Trump in contempt and fine him $10,000 per day for not meeting a March 31 deadline to turn over documents in a parallel civil investigation. Trump is appealing a subpoena for his testimony in that investigation, but not one requiring him to provide documents.

“Instead of obeying a court order, Mr. Trump is trying to evade it,” Attorney General Letitia James said. “We are seeking the court’s immediate intervention because no one is above the law.”

Trump slammed James as an “operative for the Democrat Party” and called her effort to sanction him “a continuation of the greatest Witch Hunt of all time.”

“I’ve been investigated by the Democrats more than Billy the Kid, Jesse James, and Al Capone, combined,” Trump said in a statement. “This has been going on for years, and in all cases, I have been innocent.”

Bragg’s statement proclaiming that the Trump investigation was still active marked his first public comment on the matter since the two men who had been leading it, Mark Pomerantz and Carey Dunne, resigned Feb. 23 in a dispute over the direction of the case.

Pomerantz, a former Mafia prosecutor, wrote in a resignation letter that he believed Trump is “guilty of numerous felony violations” but that Bragg, who inherited the probe when he took office in January, had decided not to pursue charges.

Pomerantz said in the letter, published last month by The New York Times, that there was “evidence sufficient to establish Mr. Trump’s guilt beyond a reasonable doubt” of allegations he falsified financial statements to secure loans and burnish his image as a wealthy businessman.

“I believe that your decision not to prosecute Donald Trump now, and on the existing record, is misguided and completely contrary to the public interest,” Pomerantz wrote.

Bragg’s silence after the resignations and the March 23 publication of Pomerantz’s letter gave rise to a narrative that the investigation was effectively dead.

After Pomerantz and Dunne left, Trump lawyer Robert Fischetti told the Associated Press: “I’m a very happy man. In my opinion, this investigation is over.”

Pomerantz wrote that Vance had directed them to seek an indictment of Trump and other defendants “as soon as reasonably possible,” but that Bragg reached a different conclusion after reviewing the evidence.

Vance and Bragg are Democrats. No ex-president has ever been charged with a crime.

In his statement Thursday, Bragg tried to wrest back the narrative, putting Trump on notice that he isn’t done while reassuring his own supporters, who backed him in part because he pledged to continue investigating the former president, a Republican.

Bragg said that a team of “dedicated, experienced career prosecutors” is working on the investigation, led by his Investigation Division chief Susan Hoffinger and that they are “going through documents, interviewing witnesses, and exploring evidence not previously explored.”

“In the long and proud tradition of white-collar prosecutions at the Manhattan D.A.’s Office, we are investigating thoroughly and following the facts without fear or favor,” Bragg said.

So far, the three-year investigation has resulted only in tax fraud charges against Trump’s company, the Trump Organization, and its longtime finance chief Allen Weisselberg relating to lucrative fringe benefits such as rent, car payments and school tuition. They have pleaded not guilty.

Weisselberg’s lawyers filed court papers in February asking a judge to throw out his case, arguing that prosecutors targeted him as punishment because he wouldn’t flip on the former president.

Trump has cited potential peril from the criminal case as he appeals a ruling requiring him to answer questions under oath in James’ civil investigation.

Trump’s lawyers contend James, who assigned two lawyers to work on the criminal case, is using the guise of a civil deposition to get around a state law barring prosecutors from calling someone to testify before a criminal grand jury without giving them immunity.

James, a Democrat, has said her investigation has uncovered evidence that Trump may have misstated the value of assets like golf courses and skyscrapers on his financial statements for more than a decade.

Bragg said his career and perspective have been shaped by “high-profile, complex investigations,” including a lawsuit he oversaw while a top deputy in the attorney general’s office that led to the closure of Trump’s charity over allegations he used it to further his political and business interests.

“Prosecutors fulfilling their duties cannot and do not bring only cases that are ‘slam dunks,’” Bragg wrote. “To the contrary, every case must be brought for the right reason — namely that justice demands it. That’s what I’ve done throughout my career, regardless of how easy or tough a case might be.”

A grand jury convened in the Trump investigation last fall hasn’t met regularly for several months and its term is expected to run out soon, but Bragg said there are grand juries sitting in Manhattan all the time and “there is no magic at all to any previously reported dates.”

“In the meantime, we will not be discussing our investigative steps. Nor will we be discussing grand jury matters.” Bragg wrote. “In short, as we have previously said, the investigation continues.”