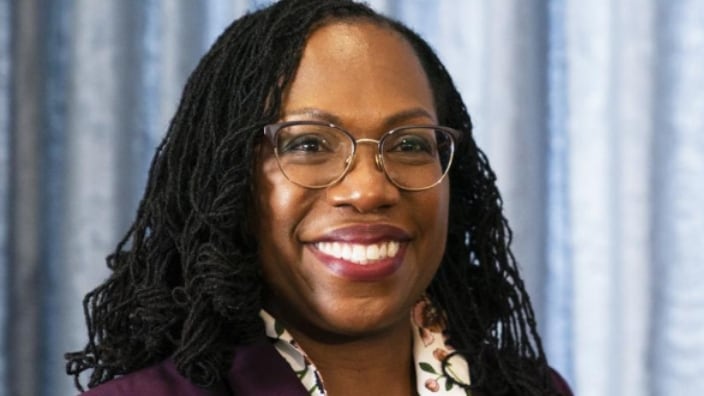 Reaction to Ketanji Brown Jackson’s confirmation was jubilant from many corners, and the word “historic” was repeated again and again.

WASHINGTON (AP) — “On this vote, the yeas are 53, the nays are 47, and this nomination is confirmed,” Vice President Kamala Harris said from her chair presiding over the Senate. Then, she smiled.

And with that, the nation’s first female and first Black vice president announced the confirmation of the first Black woman to the Supreme Court. Ketanji Brown Jackson will join the high court following Justice Stephen Breyer’s retirement this summer.

Cheers broke out in the Senate chamber. At the White House, Jackson and President Joe Biden embraced.

Reaction to Jackson’s confirmation was jubilant from many corners, and the word “historic” was repeated again and again. Others, including Republican lawmakers who voted overwhelmingly against her, kept up their criticism of her record, calling her an activist judge.

At Howard University’s law school, students watching the vote live on television listened raptly from a conference room of Houston Hall, the main academic building. The students at the historically Black school broke into applause when the vote was announced by Harris, who attended Howard as an undergraduate and is also the first person of South Asian descent to be vice president.

“We have a dark-skinned, Black woman on the Supreme Court with locks and she’s going to be looking for clerks,” said first year student Jasmine Marchbanks-Owens, 27, referring to the young lawyers who spend a year helping Supreme Court justices with their work.

Former President Barack Obama and former first lady Michelle Obama were among those celebrating. “Like so many of you, I can’t help but feel a sense of pride — a sense of joy — to know that this deserving, accomplished Black woman will be a part of the highest court in the land,” the former first lady wrote on Twitter.

“This is a great day for America, and a proud moment in our history,” her husband wrote.

Vermont Sen. Patrick Leahy, the Senate’s no. 2 Democrat, said in a statement it was “History indeed. And long overdue.” New Jersey Sen. Cory Booker, one of only three Black senators and an exuberant supporter of Jackson’s during her confirmation hearing, said in a video message on Twitter: “Today is a mountain of joy. Today is a day for celebration. Today I rejoice. I cry tears of joy.”

District of Columbia Mayor Muriel Bowser, the city’s second Black woman to be mayor, called it “a day filled with great hope for the future of our country.”

“I know there are millions of young girls, like my daughter, who are looking at this moment,” he wrote.

Martín Sabelli, the president of the National Association of Criminal Defense Lawyers, said Jackson also brings a diversity of experience to the court. She will be the first justice since Thurgood Marshall, the legendary civil rights lawyer who was the first Black person on the court, with significant criminal defense work on her resume. Sabelli is hoping to see even more perspective from “in the trenches” state defense attorneys reflected in the judiciary.

“As a proud ‘girl dad,’ I couldn’t be more thrilled to have the opportunity to explain to my two young daughters what this historic moment means to the African American community. Yet another glass ceiling has been permanently shattered on a national level. Representation does matter,” Jackson State University President Thomas K. Hudson wrote to students, faculty and staff at the historically Black school in Mississippi.

Only three Republicans in the evenly divided Senate voted to confirm Jackson: Susan Collins of Maine, Lisa Murkowski of Alaska and Mitt Romney of Utah.

In a statement after the vote, Republican National Committee Chairwoman Ronna McDaniel called Jackson “a radical, activist judge” who is in “lockstep with the far left’s political agenda.” She vowed that Republicans would “hold Democrats accountable this November for supporting Biden’s radical pick.”

At Howard University, the celebration didn’t last long. There was studying to do. Still, Benjamin Baker, 27, of Sylacauga, Alabama, called Jackson’s confirmation “monumental” and said it was for all the Black women who had come before her. “This is for them and for all of the Black women that will come after her,” he said.