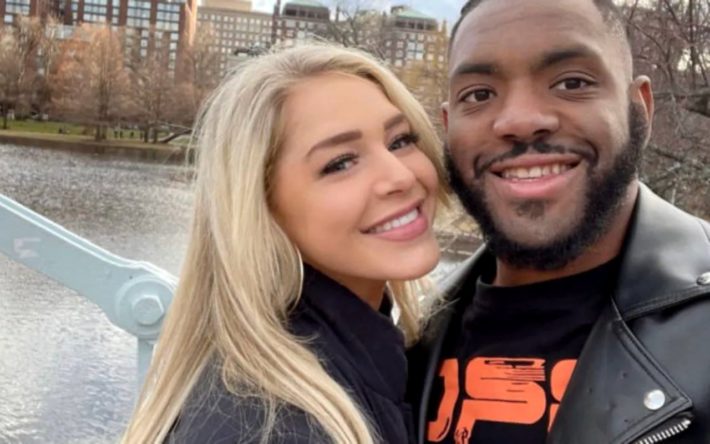 Courtney Tailor a 25-year-old white woman is known as a social media Influencer and OnlyFans model. Authorities have held her in connection to the death of her 27-year-old Black boyfriend, Christian Obumseli.

The video, obtained by TMZ, shows Courtney sitting on the floor of a luxury apartment after police arrived. She is only wearing a bra and sweatpants while her hands are handcuffed as she talks to the cops. Two dogs are seen walking around Courtney and at one point, she is seen kissing one of her beloved dogs.

Courtney, who also makes a living by posting racy contents on OnlyFans, was detained on Sunday, April 3 for allegedly stabbing her boyfriend Christian Obumseli during a domestic dispute. Police, who responded to a 911 call from Courtney at the luxury apartment building in Miami, Florida at around 5 P.M., found her boyfriend stabbed once in the shoulder when they arrived. Christian was transported to a nearby hospital, but he eventually succumbed to his injuries.

She, however, was not arrested because she was taken to a mental institution. When she was taken to the police department for questioning, the 25-year-old reportedly threatened to kill herself. Police said that the threat led to an evaluation, causing her to be “Baker Acted.”

“We know that there was a physical altercation between them before he was stabbed,” a Miami PD spokesperson said. Friends and neighbors said that the couple had a long history of domestic dispute.

Friends said that Christian had recently moved to the area and was living with Courtney at the One Paraiso apartment building, located in the Edgewater neighborhood of Miami. “We’ve seen her hit him,” said a friend named Ashley Vaughn. “I’ve never seen him hit her.”

Interestingly, one day after the incident, when Courtney has been placed on a psychiatric hold, her X-rated post was uploaded on her OnlyFans account. Courtney has also appeared on G-Eazy’s 2015 music video for his song “Me, Myself and I”.

The post OnlyFans Model Covered In Blood In Graphic Video From Fatal Stabbing Of Her Boyfriend [Video] appeared first on LOVEBSCOTT.