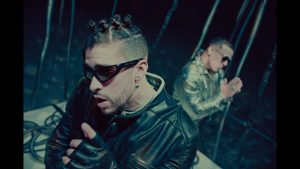 On-screen, the dramatic picture brings these two titans together. It transports them to another universe. Dark figures encircle this powerful duo as the clip turns to a shot of the goat on the record cover—a clear representation of Daddy Yankee’s legacy—with a sci-fi subtext. It’s unlike anything else either superstar has done in the past. “X LTIMA VEZ” has quickly become a fan favorite, with over 44 million streams in its first week.

LEGENDADDY, Daddy Yankee’s farewell album, recently debuted at #1 on Billboard’s Top Latin Albums List, marking his fifth straight #1 debut on the chart. In addition, it debuted at #8 on the Billboard Top 200, reaching his greatest rank on the chart to date and his first Top 10 since 2007’s El Cartel: The Big Boss. It has also climbed to the top of the Spotify Weekly Top Albums Global Chart, with over 326 million global streams.