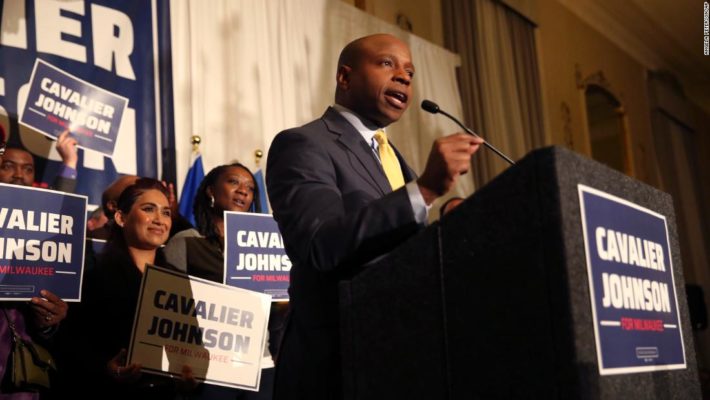 Voters in Milwaukee have elected Cavalier Johnson as the city’s next mayor, CNN projects. Johnson, a Democrat who currently serves as the city’s acting mayor, is the first African American elected to the post.

Cavalier Johnson, who previously stepped in as acting mayor in late 2021, beat out Bob Donovan by a wide margin in the April 5 special election.

Johnson takes over the seat previously held by former Mayor Tom Barrett, who has held onto the position since 2004.

“I want to thank Milwaukee’s voters,” Johnson said during his victory speech at the Hilton Milwaukee City Center. “It’s because of you that after a 176-year history in this city, a Black man can stand up and say that ‘I’ve been elected to serve as your mayor.’”

During his campaign, Johnson told voters he plans to curb the city’s violence and improve its COVID-19 response. The 35-year-old Milwaukee native was first elected to the Common Council in 2016, where he quickly rose to Council President. He also served as Alderman for the 2nd District, where experts have mentioned many of Johnson’s support on the ballots came from.

In regards to making history, Jone said the “symbolism” of the moment isn’t lost on him. “And it shouldn’t be lost on anybody in this room either. This is an important moment in our state’s history, so I hope that all the Black and brown boys and girls when they wake up for school, they do so knowing that where you live, no matter how much or how little your parents make, and no matter the color of your skin that in Milwaukee there’s a place for you too,” Johnson said.

Thank you, Milwaukee. Now let’s get to work! pic.twitter.com/uhiKcFQOJ6