Police: Arrest made in slaying of girl walking on NYC street 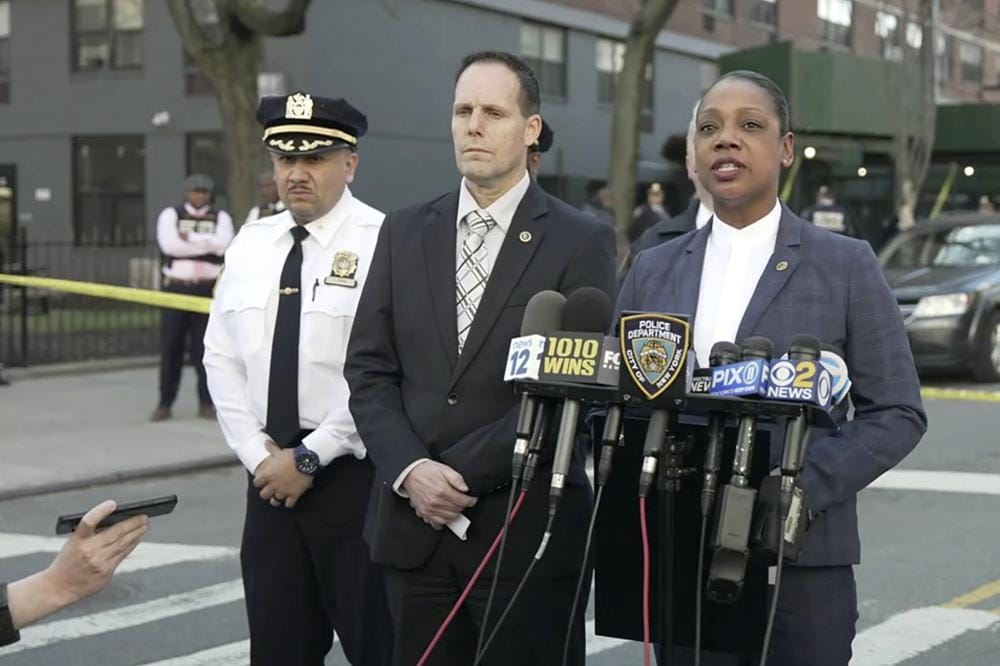 The shooting happened outside of the South Bronx Educational Campus, police say.

A suspect was charged Saturday in the fatal shooting of a teen girl who was walking home from school when she was hit by a stray bullet during a street dispute in New York City.

New York Police Department officials announced the arrest of Jeremiah Ryan on charges of murder, attempted murder and criminal possession of a weapon in connection with Friday’s shooting.

Police identified the girl killed in the shooting as 16-year-old Angellyh Yambo. Another 16-year-old girl was hit in the leg, and a 17-year-old boy was wounded in the buttocks. Both are expected to survive.

Prosecutors said Ryan, 17, would have a court appearance either later Saturday or on Sunday. They declined further comment.

It was not immediately clear if Ryan had an attorney who could speak on his behalf.

The shooting in the Bronx was the latest episode of headline-grabbing violence in the city amid a surge in crime during the COVID-19 pandemic.

Police had said the gunfire appeared to start after Ryan and another person were gesturing at each other across an intersection. The teens who were struck were walking by on the sidewalk headed home from school, police said.

Police were investigating whether the shooting suspect, who had no criminal record, was using a so-called “ghost gun” — homemade firearms that can be built with parts bought online and lack serial numbers normally used to trace them. They said a total of six rounds were fired.

At a news briefing on Saturday, Deputy Police Chief Timothy McCormack expressed dismay over the circumstances of the case.

“We have two families that are completely destroyed right now — our victim’s family and our shooter’s family,” McCormack said. He described the suspect’s mother as “a hard-working woman” whose child had “zero police contact” before his arrest.

The shooting happened outside of the South Bronx Educational Campus, which is home to two schools, Mott Haven Village Prep and University Heights Secondary School.

The Department of Education said two of the teens went to Mott Haven. The third teen went to University Prep Charter High School, a short distance away.

Mayor Eric Adams has made fighting crime a priority since taking office Jan. 1. Homicides are down slightly from this time last year, but gun violence overall remains at levels not seen in a decade.

New York City saw shootings drop to modern-era lows from 2012 to 2019, but that progress was partly erased during the pandemic and social unrest of the past two years. Violence still remains at levels far below the city’s nadir in the 1990s or even in the decade after the Sept. 11 terror attacks.

The post Police: Arrest made in slaying of girl walking on NYC street appeared first on TheGrio.