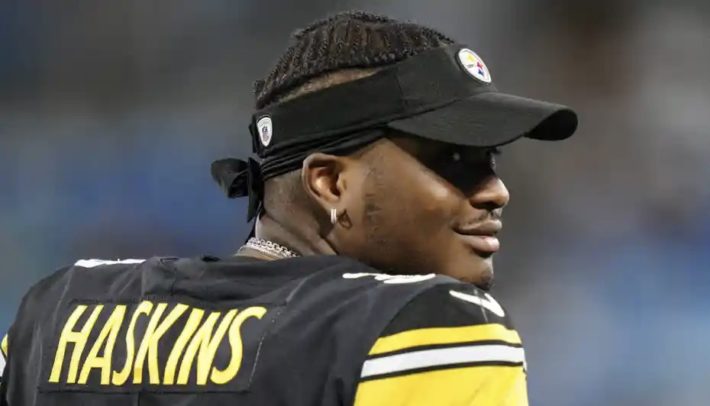 Dwayne Haskins, the former first-round NFL Draft pick who was a finalist for the Heisman Trophy during his collegiate career at Ohio State, died on Saturday morning.

Miranda didn’t say why Haskins was on the highway. The accident caused the highway to be shut down for several hours.

“He was just walking on the highway and got hit,” Miranda told The Associated Press.

Haskins was training in South Florida with other Steelers quarterbacks, running backs and wide receivers.

“I am devastated and at a loss for words with the unfortunate passing of Dwayne Haskins,” Steelers coach Mike Tomlin said in a statement. “He quickly became part of our Steelers family upon his arrival in Pittsburgh and was one of our hardest workers, both on the field and in our community. Dwayne was a great teammate, but even more so a tremendous friend to so many. I am truly heartbroken.

“Our thoughts and prayers are with his wife, Kalabrya, and his entire family during this difficult time.”

After a standout 2018 season at Ohio State, Haskins was selected 15th overall by the Washington Commanders in the 2019 draft.

“We are devastated to hear the news of the tragic passing of Dwayne Haskins Jr.,” Commanders owners Daniel and Tanya Snyder said in a statement. “He was a young man with a tremendous amount of potential who had infectious personality. To say we are heartbroken is an understatement. Our hearts and prayers are with the members of Dwayne’s family and all of those who knew him and loved him.”

“Dwayne was a talented young man who had a long life ahead of him,” Commanders coach Ron Rivera said in a statement. “This is a very sad time and I am honestly at a loss for words. I know I speak for the rest of our team in saying he will be sorely missed. Our entire team is sending our heartfelt condolences and thoughts and prayers to the Haskins family at this time.”

The world lost a great person today. When Dwayne first walked into the locker room I could tell he was an upbeat guy. He was always making people smile, never taking life for granted. His impact on me will last a forever.

Praying for the Family of Dwayne Haskins. Rest in Paradise young King @dh_simba7 ??????

RIP Dwayne Haskins, condolences to the Haskins family. He was a KING and a truly great friend to me and everyone he came around. You’ll be missed by everyone you’ve touched throughout your life ??

Dwayne Haskins was always pure class every time the OSU media spoke with him. Great young man. #RIP to one of the best young men and QBs in Ohio State history. So damn sad.

RIP Dwayne Haskins.. heartbreaking… Prayers to his family & loved ones.
Love yours while they’re here!

Shame on ESPN’s Adam Schefter for breaking the story with the below original tweet.

How about “ Dwayne Haskins, son, husband, buckeye brother, friend, beloved teammate has passed away” TF his career ups and downs have to do with him unfortunately losing his life????? STFU! Let his family & friends grieve instead of throwing shade. Praying for the Haskins family!! pic.twitter.com/gb1D9KcgCQ

Athletes for the record.. the shit @AdamSchefter wrote that’s how a lot of people view us.. we ain’t shit but entertainment!.. if you let 1 treat you with disrespect the rest will follow…

you lame @AdamSchefter give that dude name some respect

You gotta do better @AdamSchefter !!! This is wild!! A MAN lost his life!! https://t.co/BowSkkLw66

Why include that bulshit in your tweet !!? Y’all reporters ain’t got no heart https://t.co/akmiJJ4M1W

The players we cover are human beings; not prospective transactional content. Rest In Peace to the brother Dwayne Haskins and my condolences to his family and loved ones.

The post Steelers Quarterback Dwayne Haskins Died After Getting Hit By A Car [Photos] appeared first on LOVEBSCOTT.