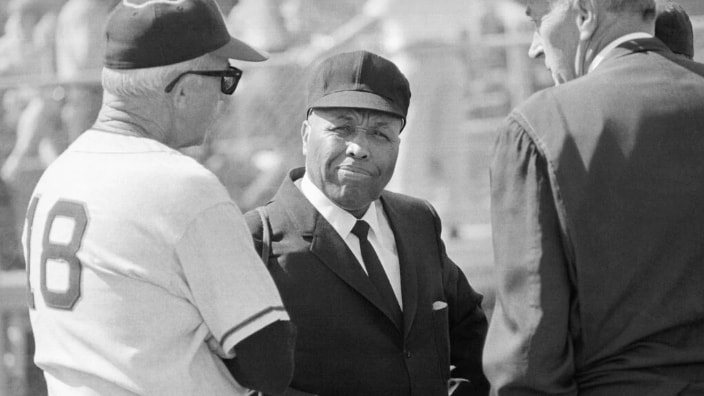 Emmett Ashford described the moment he umpired his first game in 1966 as the thrill of his life, though he almost didn’t make it into the ballpark.

The history books say the game was uneventful as the Indians won 5-2. But the box score notes that Emmett Ashford was the third-base umpire. The Indians are now called the Cleveland Guardians.

According to the National Baseball Hall of Fame, Ashford described the moment as the thrill of his life. It was a thrill that he almost didn’t experience because he almost didn’t get into the ballpark.

Then-Vice-President Hubert Humphrey was scheduled to throw out the game’s first pitch. The Hall of Fame noted that security was very tight, and the Secret Service didn’t believe Ashford was an umpire.

In an interview with the Hall of Fame, Ashford recalled that an agent told him there were no Black umpires in the major leagues. Ashford said there would be “if you will let me into the park.”

Ashford was born on Nov. 23, 1914, in Los Angeles. He was an athlete in high school and played semi-pro baseball. The Smithsonian magazine said Ashford’s foray into umpiring was by accident: He filled in for an umpire who didn’t show up for a game and that started his career.

He umpired high school and college games in the 1940s. After 11 years of honing his craft, in 1951, Ashford became the first Black professional umpire in the old Class C Southwest International League, according to MiLB.com.

Being the first Black umpire in the age of segregation wasn’t easy. Ashford recalled that fans hurled racial slurs at him. In 1953, the Class A Western league removed its president for allegedly refusing to let Ashford work games, according to MiLB. And a fellow umpire called him “boy,” The Smithsonian reported.

He moved up to the Pacific Coast League in 1954, where he would umpire for 12 years before the American League purchased his contract when he was 51.

Ashford had a short major league career because the American League had a mandatory retirement age of 55 that the league bent on occasion. However, he had an eventful run, working the 1967 All-Star Game and the 1970 World Series.

“I feel proud having been an umpire in the big leagues not because I was the first Black man but because major league umpires are a very select group of men,” Ashford told the Hall of Fame. “But the greatest satisfaction I’ve gotten is the feeling of accomplishment in doing what I set out to do in the first place when they said it couldn’t be done. “