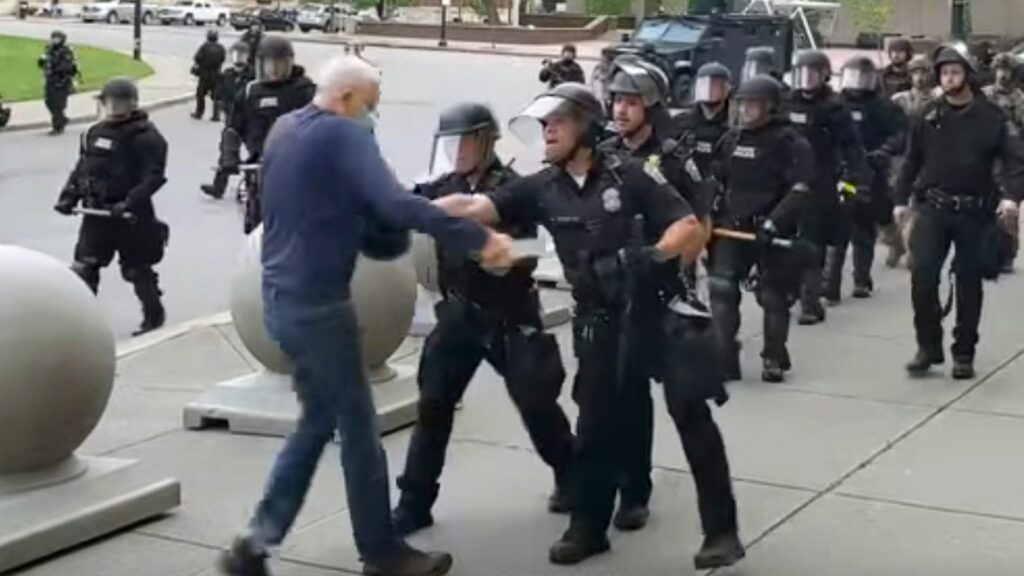 Two Buffalo, New York, police officers who shoved an elderly man to the ground during racial injustice protests following the murder of George Floyd have been cleared of any wrongdoing.

An arbitrator ruled on Friday that Buffalo Police Department Officers Robert McCabe and Aaron Torgalski won’t face charges over the incident. The two officers were charged last year with second-degree assault for pushing 75-year-old Martin Gugino during a Black Lives Matter protest in June 2020, causing him to fall backwards onto the concrete, and bleed from a head wound.

“Upon review, there is no evidence to sustain any claim that Respondents (police officers) had any other viable options other than to move Gugino out of the way of their forward movement,” arbitrator Jeffrey Selchick wrote in his decision.

“Gugino, after the force was applied to him, appears to have not been able to keep his balance for reasons that might well have had as much to do with the fact that he was holding objects in each hand or his advanced age,” Selchick added. The use of force employed by Respondents reflected no intent on their part to do more than to move Gugino away from them.”

Despite the ruling, Gugino’s attorney, Melissa Wischerath, says they are moving forward with their lawsuit against the city of Buffalo, which was filed in U.S. District Court for the Western District of New York last summer.

“We are not aware of any case where this arbitrator has ruled against on-duty police officers, so his ruling here on behalf of the police was not only expected by us, but was certainly expected by the union and city who selected and paid him,” Wischerath told the Buffalo News, per CBS.

“Two good cops who initially got thrown under the bus are back to the profession they love and they’re doing it with a clean slate,” association attorney Thomas Burton wrote. “No criminal charges, nothing administratively. They’re ready to hit the streets and go back to work for the citizens of Buffalo.”

This ruling is deplorable. Watch the police assault that man in the video below — it certainly looks like wrongdoing to us.

The post Buffalo Police Officers Cleared of Wrongdoing After Shoving 75-Year-Old Man to Ground During Protest appeared first on LOVEBSCOTT.