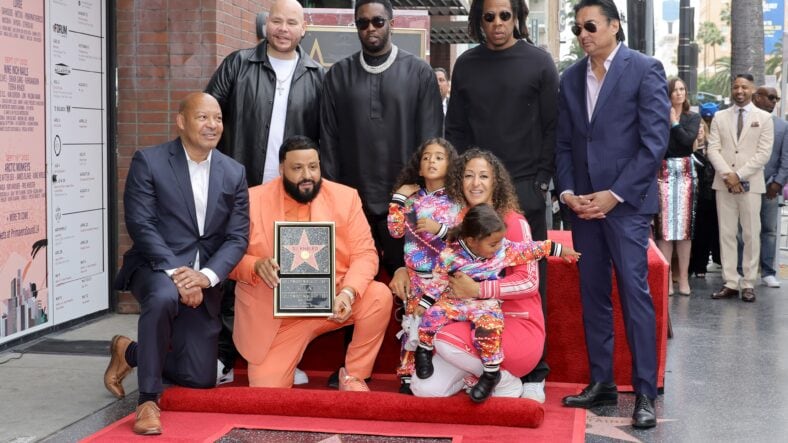 DJ Khaled, one of hip-hop’s biggest personalities and most successful artists, received his star on the Hollywood Walk of Fame on Monday.

Khaled, 46, was joined by his wife, Nicole Tuck, and their two children, Asahd and Aalam. Fat Joe, Sean “Diddy” Combs, and Jay-Z were also on hand as he unveiled the star that bears his name.

The ceremony was presided over by Dwayne Gathers, past chair of the Hollywood Chamber of Commerce, with other guests like Epic Records CEO Sylvia Rhone, executive Antonio “LA” Reid, Jeezy, Future, and Teyana Taylor, in attendance. Fat Joe and Combs were both guest speakers at the ceremony.

One of Khaled’s big breaks was working with Fat Joe as the on-stage DJ for his hip-hop collective, Terror Squad, during their live shows.

“When I first met Khaled, I fell in love with him, his charisma, his personality,” Fat Joe said. “I knew that one day, everybody else in the world would get what I got; a special guy.”

Known for his catchphrase, “We the Best,” Khaled earned his spot as the 2,719th recipient of a Hollywood Walk of Fame star after nearly two decades of releasing platinum and multi-platinum singles and albums.

Khaled made a name for himself by connecting star-studded artists of rap, R&B, pop, and other genres on songs that became big hits. Such songs include “All I Do Is Win,” with T-Pain, Rick Ross, Ludacris, and Snoop Dogg, “I Got the Keys,” feature Jay-Z and Future, and “I’m On One,” with Drake, Ross, and Lil Wayne.

With all of his accomplishments, Khaled credits his success to his ambition and work ethic, inspired by his family and faith.

“Everybody who puts out great work loves greatness to come back,” Khaled told Variety leading up to receiving his star.

“Now, am I driven by awards or other accolades? No. That I came from nothing, that I made it this far, and that I keep going and I keep growing — that’s what drives me. Being a father of two children drives me. Being a good man drives me — being there for my family and my children. I’m grateful for blessings that God gave me.”