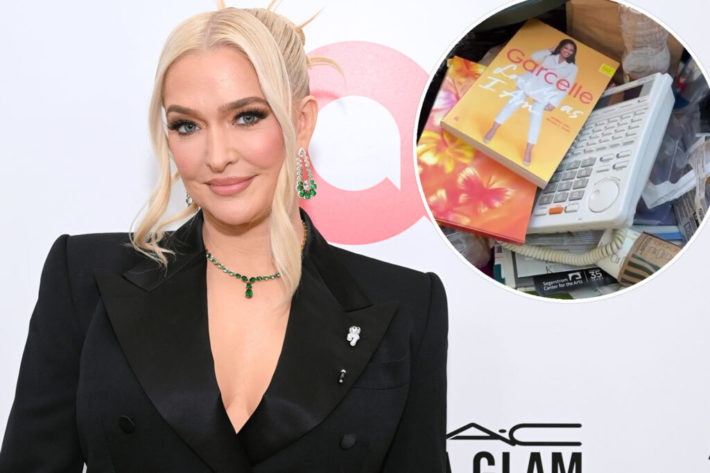 Erika Jayne may have gotten an early copy of Garcelle Beauvais’ new book, “Love Me as I Am,” but it didn’t take long for her to toss it into the trash!

Erika Jayne threw a copy of Garcelle Beauvais’ new memoir in her trash can amid the “Real Housewives of Beverly Hills” co-stars’ feud.

“@Garcelle, even though you unfollowed me I’m sure you’ll see this,” Jayne wrote on her Instagram Story Sunday over a video of the book, “Love Me as I Am,” sitting on top of garbage including a Starbucks cup, an old house phone and a plastic water bottle. (Someone clearly doesn’t recycle.)

Jayne, 50, clarified in a comment on the social media app that she did not buy Beauvais’ memoir in the first place and is “moving on.”

Jayne’s post came just three hours after Beauvais, 55, shaded her by posting a clip from the “RHOBH” Season 12 trailer, in which she tells Jayne, “I don’t have to make you look bad — you can do that all on your own.”

“You know how else you can look bad all on your own? By not pre-ordering your copy of #LoveMeAsIAm before it comes out on Tuesday ? link in bio,” Beauvais captioned the shady post Sunday.

You know how else you can look bad all on your own? By not pre-ordering your copy of #LoveMeAsIAm before it comes out on Tuesday ? Get yours: https://t.co/NAPCJDNgAe pic.twitter.com/NSQuXOfZTb

Beauvais’ close friends Sutton Stracke and Crystal Kung Minkoff both took her side, with Stracke, 50, commenting that the “Real” co-host has “serious [balls]” and Kung Minkoff, 36, saying she was “dead” with laughter.

Jayne’s garbage can moment instantly went viral on Twitter and left the “RHOBH” fan base divided over whether she crossed the line.

“I rarely comment on this stuff but Erika is just petty and a wanna be ‘bully’. Good for Garcelle for standing up and tell her the hard cold truth about herself #byeerika #byerinna #overyall,” one fan wrote.

“hasn’t she already told u she gives zero f–ks,” another chimed in, referring to Jayne’s song “How Many F–ks.”

“Erika can put Garcelle’s book in the trash all she wants. It’s still money in Garcelle’s bank and free promotion as well #RHOBH,” a third fan pointed out.

Jayne and Beauvais’ relationship appears to take a serious turn for the worse during Season 12, although they previously barely fought. Beauvais unfollowed Jayne on Instagram in January, but Jayne follows her.

“All I can say is she called me something that I did not like, and so therefore, when somebody offends you in a way, I don’t want to see her posts,” Beauvais explained on “The Real” shortly after fans caught wind of the drama.

“The Real Housewives of Beverly Hills” Season 12 premieres Wednesday, May 11, at 8 p.m. ET on Bravo.