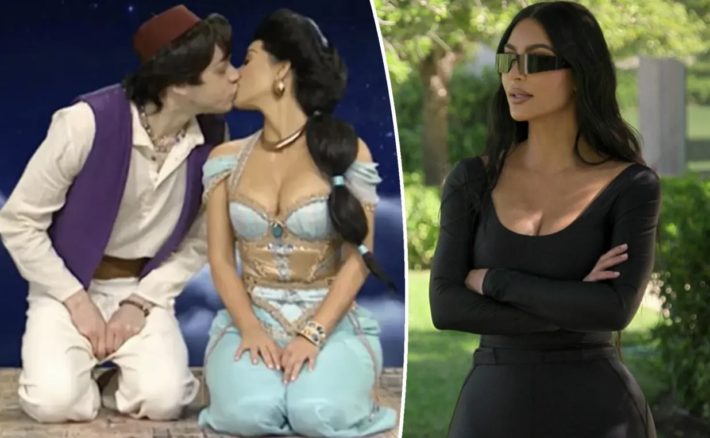 Kim Kardashian is opening up about how her romance with “Saturday Night Live” comedian Pete Davidson came completely out of the blue.

During the premiere episode of Hulu’s “The Kardashians,” the reality star shares she agreed to host the sketch comedy series and says she asked the comedian for advice when they met and bonded at the Met Gala in September 2021.

“I ran into Pete Davidson at the Met and I was like, ‘I am so scared. I don’t know what I signed up for,’” she recalls of their chat. “And he’s like, ‘Can you read cue cards? You’re good. You’re good.’”

Kardashian, 41, ultimately hosted the NBC show on Oct. 9 and appeared in a skit with Davidson, 28, in which he played Aladdin and she was his character’s love interest, Jasmine.

In the sketch, the pair kissed, which the Skims founder recently admitted on “Jimmy Kimmel Live!” was their first smooch. Davidson would go on to gift his now-girlfriend with their costumes and the magic carpet from the episode for Valentine’s Day.

The hot-and-heavy couple used the red carpet premiere of “The Kardashians” as their first official public appearance, but while they attended to soiree together, Kardashian posed for photos solo. Paparazzi did, however, snap them holding hands as they arrived and made their way inside.

The former “Keeping Up With the Kardashians” star previously revealed to Variety that the new series would explore her and Davidson’s relationship, though he will not appear on camera in the first season.

“I have not filmed with him, and I’m not opposed to it,” Kardashian, who shares four children with ex-husband Kanye West, said when asked whether Davidson will appear. “It’s just not what he does. But if there was an event happening and he was there, he wouldn’t tell the cameras to get away.

“I think I might film something really exciting coming, but it wouldn’t be for this season,” she added.

“The Kardashians” premieres April 14 on Hulu.

Relive the SNL skit below.

The post Kim Kardashian Reveals She Was Talking to Pete Davidson Before Hosting ‘SNL’ [Video] appeared first on LOVEBSCOTT.