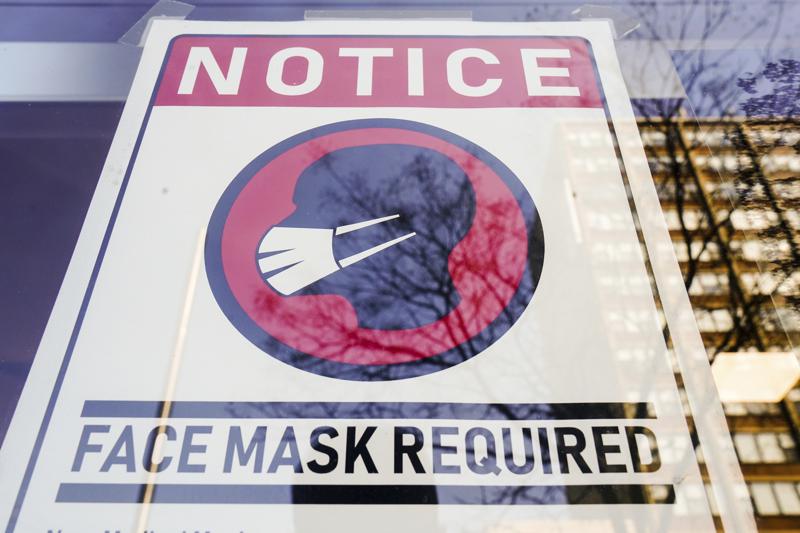 Confirmed COVID-19 cases have risen more than 50% in 10 days, the threshold at which the city’s guidelines call for people to wear masks indoors

Philadelphia became the first major U.S. city to reinstate its indoor mask mandate on Monday after reporting a sharp increase in coronavirus infections, with the city’s top health official saying she wanted to forestall a potential new wave driven by an omicron subvariant.

Confirmed COVID-19 cases have risen more than 50% in 10 days, the threshold at which the city’s guidelines call for people to wear masks indoors, said Dr. Cheryl Bettigole, the health commissioner. Health officials believe the recent spike is being driven by the highly transmissible BA.2 subvariant of omicron, which has spread rapidly throughout Europe and Asia, and has become dominant in the U.S. in recent weeks.

“If we fail to act now, knowing that every previous wave of infections has been followed by a wave of hospitalizations, and then a wave of deaths, it will be too late for many of our residents,” said Bettigole, noting about 750 Philadelphia residents died in the wintertime omicron outbreak. “This is our chance to get ahead of the pandemic, to put our masks on until we have more information about the severity of this new variant.”

Health inspectors will begin enforcing the mask mandate at city businesses on April 18.

Most states and cities dropped their masking requirements in February and early March following new guidelines from the U.S. Centers for Disease Control and Prevention that put less focus on case counts and more on hospital capacity. The CDC said at that time that with the virus in retreat, most Americans could safely take off their masks.

Philadelphia ended its indoor mask mandate March 2, and Bettigole acknowledged “it was wonderful to feel that sense of normalcy again.”

Confirmed cases have since risen to more than 140 per day — still a fraction of what Philadelphia saw at the height of the omicron surge — while only 46 patients are in the hospital with COVID-19. The CDC says community spread in Philadelphia remains low, a level at which the agency says that masking can be optional.

The restaurant industry pushed back against the city’s reimposed mask mandate, saying workers will bear the brunt of customer anger over the new rules.

“This announcement is a major blow to thousands of small businesses and other operators in the city who were hoping this spring would be the start of recovery,” said Ben Fileccia, senior director of operations at the Pennsylvania Restaurant & Lodging Association.

PolicyLab at Children’s Hospital of Philadelphia said Friday that while it expects some increased transmission in the northern U.S. over the next several weeks, hospital admissions have remained low and “our team advises against required masking given that hospital capacity is good.”

Bettigole said requiring people to mask up will help restaurants and other businesses stay open, while a huge new wave of COVID-19 would keep customers at home. She said hospital capacity was just one factor that went into her decision to reinstate the mandate.

“I sincerely wish we didn’t have to do this again,” Bettigole said. “But I am very worried about our vulnerable neighbors and loved ones.”

In New York City, Mayor Eric Adams has paused his push to unwind many of the city’s virus rules as cases have risen, opting for now to keep a mask mandate for 2 to 4-year-olds in city schools and preschools. But Adams, a Democrat who has said New Yorkers should not let the pandemic run their lives, has already lifted most other mask mandates and rules requiring proof of vaccination to dine in restaurants, work out at gyms or attend shows.

Adams was asked at a virtual news conference Monday afternoon if he was considering reimposing the New York City mask mandate in light of Philadelphia’s decision. The mayor said he would listen to his team of medical doctors for their advice on whether to bring back any restrictions. Adams himself tested positive for COVID-19 on Sunday.

New York City is now averaging around 1,800 new cases per day, about three times higher than in early March when New York began easing rules. That does not include the many home tests that go unreported to health officials.

The latest outbreak has struck many high-profile officials in Washington, including Cabinet members and House Speaker Nancy Pelosi, and the governors of New Jersey and Connecticut. Some universities have reinstated mask mandates.

D.C. health officials say they have no immediate plans to change virus protocols, but they reserve the right to change course down the road.