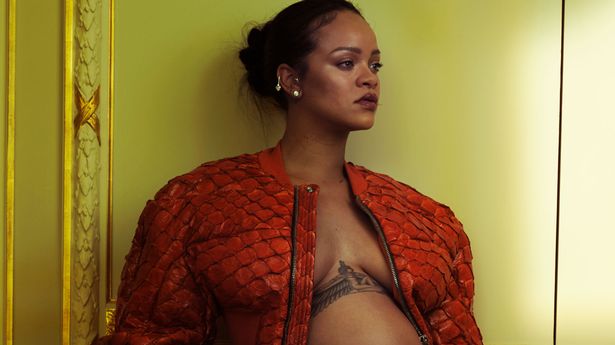 Rihanna has been unapologetic in her bold, fashion-forward maternity looks since announcing her pregnancy with partner A$AP Rocky in January, delighting fans with her choice of crop tops, sheer dresses and belly chains.

The pregnant fashion and beauty mogul covers the May 2022 issue of Vogue Magazine, displaying her baby bump in a red lace Alaïa catsuit, gloves and high heels on the front of the glossy.

In the interview, she spoke at length both about her pregnancy style and how she’ll dress her first child with boyfriend A$AP Rocky.

“When I found out I was pregnant, I thought to myself, There’s no way I’m going to go shopping in no maternity aisle,” Rihanna, 34, said.

“I’m sorry — it’s too much fun to get dressed up. I’m not going to let that part disappear because my body is changing.”

In March, she attended Paris Fashion Week in a parade of show-stopping looks, including a completely sheer Dior babydoll dress with nothing but a black thong beneath.

“To me that dress is actually the closest thing to maternity clothes that I’ve worn so far,” Rihanna said of the look. “And we hadn’t really done lady that whole time. So I was like, Let’s do lady!”

As for her black Savage X Fenty thong? “Listen,” she said, “they were going to see my panties regardless. So they’d better be mine.”

Inside the magazine, she sports another pair of Savage X Fenty underwear — with nothing but an oversized Marc Jacobs coat covering her. She also lounges in the tub with strategically placed bubbles and a Boucheron necklace and stuns in a sheer watercolor Jean Paul Gaultier Haute Couture by Glenn Martens dress, among other jaw-dropping looks.

“I’m hoping that we were able to redefine what’s considered ‘decent’ for pregnant women,” she said in the interview. “My body is doing incredible things right now, and I’m not going to be ashamed of that. This time should feel celebratory. Because why should you be hiding your pregnancy?”

As for what Rih’s baby will wear? Despite melting over a tiny trench coat while shopping recently, she said she has yet to purchase anything for her bundle of joy. “Not. A. Single. Thing!” she emphasized.

When the time comes, there’s no doubt baby Fenty will be the most stylish.

news newswirelink rihanna vogue
Share. Facebook Twitter Pinterest LinkedIn Tumblr WhatsApp Email
Previous Article‘She’s Gone For A While’: Whoopi Goldberg Is Taking Some Time Off From ‘The View’
Next Article DJ Jazzy Jeff Defends Will Smith By Noting All The Times That He ‘Should’ve Smacked The Sh*t Out Of Somebody’ But Didn’t [Photo + Video]