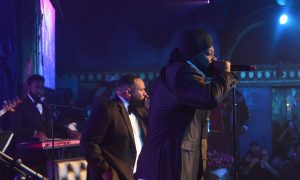 On Monday night (April 11), a classic hip-hop album showcased its bind to longevity. Wu-Tang Clan legends Raekwon and Ghostface Killah took to the stage of Sony Hall in New York City and performed an array of hits from the Chef’s classic solo debut album, Only Built 4 Cuban Linx, also known as The Purple Tape, with a band in live form.

The ensemble included two electric guitar players, two keyboard players, and one drummer. Aside from the two iconic emcees, there was another vocalist who carried out the majestic harmonies of the album, as heard on “Can’t Be All So Simple (Remix)” and “Rainy Dayz,” Bobbi Storm. Together, the troupe fervidly enacted a symphonic expression of The Purple Tape, a spin in favor of the era-defining album’s reigning legacy as a game-changer.

The Purple Tape, or Only Built 4 Cuban Linx, is among the pioneering works for narrative mafioso rap and ultimately catapulted the style into a subgenre of hip-hop. Nearly three decades later, the Chef remains in awe at the album’s well-known repertoire but, in solid humility, commemorates the gem, representing a defining period.

“When I did that album, I felt personally that it was something great, but the commemoration that its given is undeniably awkward to me because I’m just a kid from the street that tried to do something that I felt was genuine to me, and the world looked at it as a blessing.”

The performance is a part of Ja Rule’s VIBES Concert Series, where artists tailor a routine after their journeys in a storytelling fashion. Raekwon and Ghostface Killah’s concert was the first to kick off the series as the experience plans to take on a roster of class acts. The event was streamed exclusively on the ICONN LIVE app.