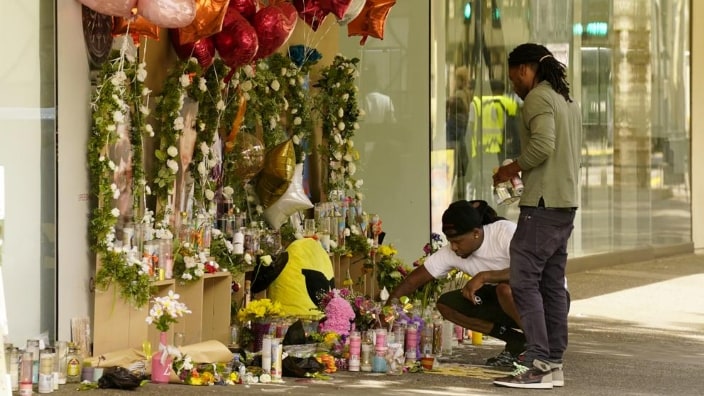 The violence just blocks from California’s Capitol highlights the successes and challenges many U.S. urban centers are facing.

SACRAMENTO, Calif. (AP) — The mass shooting that police say was a gun battle between rival gangs that left six dead and 12 wounded earlier this month shook the downtown core of California’s capital — and created another challenge for a city trying to redefine itself as a destination for more than just government workers.

In recent years, downtown Sacramento has benefited from billions of dollars of development but has been rattled by rising crime, protests resulting in property damage and an economic drubbing caused by the pandemic. Now, the city is reeling from the aftermath of the April 3 shooting, when at least five gunmen fired 100 shots as people left bars and nightclubs.

The violence just blocks from the Capitol highlights the successes and challenges many U.S. urban centers are facing as struggles with crime and homelessness persist despite revitalization efforts.

Though Sacramento is home to more than 500,000 people, it’s considered sleepy by California standards. The derisive nickname “Cowtown” grew out of its agricultural roots.

Today, downtown is at the center of the city’s efforts to become an entertainment and food destination. Local officials have worked to rebrand the city as “America’s Farm to Fork Capital,” a nod to a large number of well-regarded restaurants that get ingredients from the region’s many farms.

A major part of the revitalization is a six-block strip of K Street anchored by a renovated convention center and the Golden 1 Center, home to the NBA’s Sacramento Kings and a regular stop for major concert tours. The shooting happened on a block that’s home to high-end nightclubs but also dotted by vacant buildings that once housed coffee shops and restaurants.

Police have made two arrests connected to the shootings, but no one has been charged with homicide. The violence “came at a really pivotal moment for downtown,” said Sacramento City Councilwoman Katie Valenzuela, who represents the area.

“It’s causing me to sort of reflect on where we go from here — and as a city, not just as downtown,” she said.

A century ago, K Street was a bustling, diverse center of activity. But the strip struggled as people moved into the suburbs — giving way to decades of failed revival efforts, including the construction of a mall in the late 1960s and the launch of a light rail commuter line in the 1980s.

A fresh wave of investment came to the area about a decade ago, with new businesses opening on K Street as part of an effort to revive downtown after the financial crisis. The Golden 1 Center’s 2016 opening sought to build on that, helping generate $6.7 billion in nearby investment and spurring the opening of 150 new businesses, according to the Downtown Sacramento Partnership business group.

Then the pandemic hit, sending many of downtown’s 100,000 workers home and forcing some businesses to close. Now about 45,000 people work downtown daily, according to the partnership.

As employment fell, crime rose. Aggravated assaults, burglaries and vandalism were up in 2020 and 2021 compared to the five previous years for a roughly 100-square block area that includes the Capitol and the arena, according to Sacramento police crime data.

The city’s central hub has also served as the epicenter for protests focusing on racial justice and police misconduct. Protesters in 2018 shut down a downtown freeway entrance and blocked fans from entering the arena after Sacramento police shot and killed a young Black man. Then demonstrations in 2020 over the police killing of George Floyd in Minneapolis swept the city. Many downtown properties were vandalized and some were ransacked.

Now Sacramento is among the ranks of cities recovering from recent mass shootings. Since 2017, there have been 133 mass shootings in the U.S., according to a database compiled by The Associated Press, USA Today and Northeastern University.

Dayton, Ohio, in 2019 was shaken when a gunman killed nine people and wounded 17 just after midnight at a bar in the main entertainment district for the city of 140,000. Sandy Gudorf, president of the Downtown Dayton Partnership, said officials mounted an “intentional strategy to reclaim the district” after the shooting.

Within three weeks of the violence, there was a free performance by Dave Chappelle, who lives outside the city. The community rallied to support local businesses, but it took time for people to feel comfortable returning to nightlife. The pandemic hit just as that activity was rebounding, Gudorf said.

“In people’s minds and hearts they knew that this did not define who we are. It was an incident, it was a tragic incident where we lost lives and people were inured,” she said. “I think it just took time to process all of that.”

“It’s not one or the other” when it comes to enjoying the city’s entertainment offerings and feeling safe,” he said last week.

Rachel Muro, a manager at the locally owned Capital Books several storefronts away from the shooting, said downtown has problems like any city but that people should not avoid it. The bookstore’s owners recently opened a board game cafe just around the corner.

“We believe in this part of town enough to continue to help make it thrive,” Muro said.

Elsewhere on the block, the area’s troubles are obvious, with many office and restaurant spaces vacant. Homelessness downtown and elsewhere in Sacramento has been a vexing problem.

Last week the City Council voted to place a measure on the November ballot requiring the city build to more shelter beds and ban encampments on public land. Valenzuela, the councilwoman, opposed the plan and said it was inappropriate to debate that proposal so soon after the tragedy.

Crystal Sanchez, president of the Sacramento Homeless Union, said homeless people live downtown because the area has street lighting and lots of activity and plenty of alcoves near businesses where they can shelter.

“People are here because there are coves for protection,” Sanchez said.

At a brewery a few blocks from the shooting site, co-workers enjoying a drink reflected on whether the shooting changed their view of the city.

Braden Kolb, who was at a downtown bar for a friend’s 30th birthday the night before the shooting, said he patronizes downtown about once a month and that the shooting “is not going to change my behavior.”

But his friend Jason Slieter said the incident made him wonder if Sacramento is the right place to raise his family, saying he felt a sense of heaviness downtown when coming to work after the six people were killed.

“It definitely felt like something had changed,” he said.