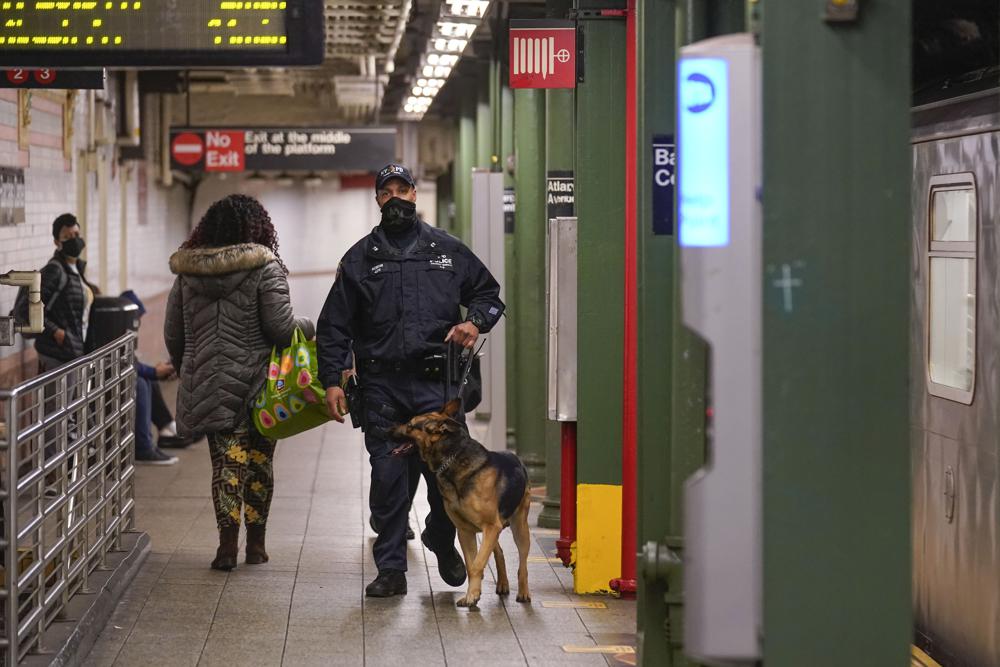 As the year began, New Yorkers shuddered at a subway crime straight out of urban nightmares — the death of a woman shoved onto the tracks by a disturbed stranger. The city’s new mayor vowed to “make sure New Yorkers feel safe in our subway system.”

But commuters Tuesday morning faced an attack that evoked many riders’ deepest fears. A rush-hour train car filled with smoke as it pulled into a Brooklyn station. Gunshots — at least 33 of them — rang out, wounding at least 10 people.

Frightened riders fled, and so did the gunman, who remained at large Wednesday.

Much is still unknown about the attack, including whether it was an act of terrorism. Authorities said they were searching for Frank R. James, 62, the suspect who they say rented a van linked to the shooting.

It was a searing reminder of the city’s unyielding battle with gun violence and the specter of terror-like attacks that hangs over New York City — and particularly the subway system that is its transportation backbone.

Police and security officials have made many attempts to harden the city against such attacks, putting officers on trains and platforms, installing cameras and even doing rare spot checks for weapons on passengers entering some stations.

Yet the sprawling system, with nearly 500 stations, largely remains like the city streets themselves: Too big to guard and too busy to completely secure.

Public officials say the subway system is crucial to the city’s recovery from the coronavirus pandemic, which saw many New Yorker avoiding mass transit during its peak. Typical daily subway ridership fell from 5.5 million riders to less than a tenth of that.

But as more people return to offices, ridership is increasing. On Monday, estimated ridership was 3.1 million, according to the MTA, which operates the system.

With the gunman still on the loose, commuters like Julia Brown had little choice but to keep riding the rails.

Gov. Kathy Hochul posted a photo on social media showing her riding a train after the shooting, and Mayor Eric Adams pledged to increase patrols in subway stations.

“We know that this hurts the mindset of many New Yorkers who are afraid of what happened, but we’re a resilient city. We’ve been here before,” Adams told MSNBC on Wednesday.ADVERTISEMENT

Even before the attack, the mayor had vowed to increase subway patrols and launch sweeps of subway stations and trains to remove homeless people using them as shelters.

In a rambling video posted on YouTube, James replayed recent speeches by Adams and Hochul and mocked their efforts to address violence as weak and futile.

“Their plan is doomed for failure,” James said in the video.

In the 1980s, New York City’s subways were a symbol of urban disorder: graffiti-covered, crime-plagued and shunned by tourists.

Like the rest of the city, though, the subways have since cleaned up their act. Before COVID-19 hit, the main problem with the trains wasn’t crime but overcrowding and breakdowns related to aging infrastructure.

After the Sept. 11 terror attacks, New Yorkers learned to live with the worry that the subways or other parts of the city could be a terror target.

In 2017, an Islamic State group sympathizer detonated a pipe bomb strapped to his chest in a subway station near the Port Authority Bus Terminal, injuring several bystanders.

That same year, the city began expanding the use of vehicle-blocking sidewalk barriers after two attacks. In one, a man who prosecutors said was also supportive of IS drove a rented truck down a bicycle path along the Hudson River, killing eight people and maiming others. In another, a psychologically disturbed man drove a car at high speed into pedestrians in Times Square, killing one and injuring at least 20.

In 2016, a man who prosecutors said sympathized with Osama bin Laden set off homemade bombs in Manhattan and New Jersey, injuring some bystanders, before being captured in a shootout with police. And in 2010, a man tried to set off a car bomb in Times Square, only to have it fizzle.

Christopher Herrmann, a former city police officer who is now a professor at the John Jay College of Criminal Justice, said episodes like Tuesday’s are bound to provoke a new round of anxiety, especially among subway riders.

“With 9/11, you have a specific target: the World Trade Center,” Herrmann said. “A lot of people can wrap their heads around that.”

But the seeming randomness of Tuesday’s attack “really invokes a lot of fear and worry,” he said, “because most people don’t consider themselves a target.”

Some subway riders expressed concern while others shrugged it off as an everyday risk.

Alexi Vizhnay considered boarding a ferry across the East River after work Tuesday but decided to take his chances on the subway. It was simply the most efficient way to get home to Queens.

“There’s a lot of things that happen out of your control,” he said. “As tragic as it is, all I can do is remind myself to be vigilant and be cautious.”

By Wednesday morning, the station where the shot-up train pulled into had reopened and commuters were once again on their way.

“You have to be more vigilant of your surroundings. But scared? No,” said Ana Marrero, who has taken the subway to work for 30 years. “You think of the tragedy and the people that were hurt, but you have no other choice and do what you have to do.”