You can’t stain something that’s already tarnished: A rebuttal of Harry Lennix’s column suggesting Will Smith return his Oscar 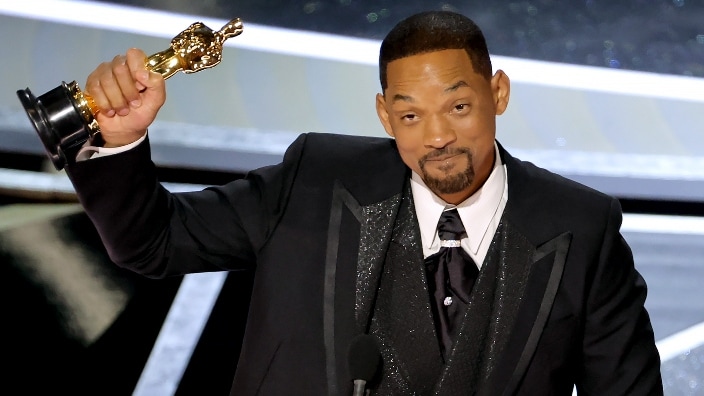 OPINION: theGrio entertainment writer Matthew Allen offers his response to Lennix’s Variety column stating Smith should give back his Oscar to restore its integrity.

On Sunday, actor Harry Lennix wrote a guest column in Variety titled, “Will Smith Must Return His Oscar To Restore The Award’s Honor.” In the piece, Lennix, a Black actor himself, suggested that Smith send his Best Actor trophy back to the Academy of Motion Picture Arts and Sciences in order to “redeem the integrity” of the Oscars as a result of him slapping Chris Rock.

Lennix, a longtime member of the Academy, expressed in the column his displeasure with Smith attacking Rock at the 94th Oscars. He took issue with Smith using God to rationalize attacking Rock during his acceptance speech, and the Academy banning Smith for 10 years, which he called a “toothless” response.

Ultimately, Lennix stated that Smith put a “stain” on the Academy and the Oscars, and he needed to return his award. He even wrote a mock statement for Smith to offer if he ships his trophy back to the Academy: “Out of respect for the 94 years of honor conferred upon this award, I do not in good conscience feel worthy of being its custodian.”

Lennix’s rhetoric about the Oscars’ integrity is what sticks out more than anything. Lennix wrote that Smith’s slap stripped the Oscars of its “honor,” “grace” and “prestige.” But does that award show warrant being put on this pedestal, given so much negative history surrounding it?

How can Smith have stained something that was already tarnished? The integrity of that trophy was compromised long before Smith told Rock to keep his wife’s name of out his mouth.

The Oscars have not been an institution that’s embraced the work and input of Black film creatives in general — or actors in particular. In its 94-year history, only six Black people have won Best Actor or Actress: Sidney Poitier, Denzel Washington, Jamie Foxx, Halle Berry, Forest Whitaker and Smith.

The fact that two white pre-teen girls (Tatum O’Neal and Anna Paquin) won Oscars before a Black woman won Best Actress speaks volumes. Is that the Academy that Lennix is trying to protect?

In 2020, only 19 percent of Oscar voters were people of color, and 33 percent were women. This is despite the efforts the Academy made to bolster diversity in its membership since the 2016 #OscarsSoWhite campaign. Even with so many new additions, the Academy is still predominately white and male.

While The Butler was snubbed at the Oscars in 2014, The Academy has chosen to celebrate Black films and performances that aren’t so unlike it. Zero Black filmmakers have won Best Director, and the six directors who have been nominated were for films that distinctly dealt with racism or Black hardship.

Since The Oscars have chiefly given attention to Black films that focus on Blackness when white films don’t have to deal with whiteness, does that not diminish the integrity of the award?

Now, let’s speak about the ceremony itself and some of the unsettling actions it has witnessed. The story of McDaniel, the first African American Oscar winner, not being able to stay for the ceremony and having her acceptance speech written for her is as notorious as it is tragic. Did that not remove the integrity of the award?

Lennix wrote that Smith returning his Oscar is the “only hope for a justifiable grace” after his slap put a “stain” on the Academy and the award.  Well, how did he feel when Adrian Brody kissed Halle Berry without permission at the 2003 Oscars when he won Best Actor for The Pianist? Was that an act of grace or an act of assault? If Brody did that on the street or at a restaurant, would it have been cute, or intrusive and disrespectful?

One glaring issue Lennix has with Smith’s “grave moral failure” is that the King Richard actor used God to rationalize his actions. While Smith’s acts were, indeed, “purely human,” what would he call the response to Sacheen Littlefeather‘s presence at the 1973 Oscars?

Marlon Brando won his second Academy Award for his role in The Godfather, and deservedly so. Rather than basking in the glory of his win amongst Hollywood’s elite, he sent activist Littlefeather, in full regalia of her Native American dress, to explain that he wouldn’t accept the award out of protest.

This was a selfless act, a small sacrifice as an effort to bring attention to a crisis affecting disenfranchised Native Americans. Was it applauded? No.

Actor and Oscar winner John Wayne was so determined to physically remove Littlefeather from the stage himself that he had to be forcibly restrained. Not to be outdone, Oscar winner Clint Eastwood made a thinly veiled joke at Littlefeather’s expense immediately following her departure: “I don’t know if I should present this award on behalf of all the cowboys shot in all the John Ford westerns over the years.”

Lennix said that leading up to the slap, much of the 94th Oscar proceedings were “frequently profane.” What is more profane than two white male actors who gained their fame reenacting violence and demeaning Native Americans on the big screen only to do it again in real life on Hollywood’s biggest night? Where was the honor that night?

Just a year ago, the Academy replaced Best Picture as the last award of the evening with Best Actor. The world anticipated this was a move to highlight the late Chadwick Boseman as we waited to see him win Best Actor posthumously for Ma Rainey’s Black Bottom. But he didn’t win. Anthony Hopkins did.

Boseman won both the Screen Actors Guild Award and Golden Globe for his role. Over the past 30 years, 24 out of the 30 men who won the Golden Globe for Best Actor later won it at the Oscars that same year. Why would they switch that award to last after years of Best Picture being last if Boseman wasn’t going to win? If it was meant to be a misdirect or a passive-aggressive practical joke, it was far more offensive than Rock’s G.I. Jane quip.

Many believe — whether or not Smith was justified for slapping Rock to defend his wife — that during a televised ceremony wasn’t the place to do it. But why should Smith have to return his Oscar to restore its integrity when so many events have sucked it out already? If Harvey Weinstein, a convicted sexual predator, gets to keep his, why not Smith?

This isn’t gaslighting or what-about-ism in an attempt to take the attention away from Smith’s actions. Given all of this history of what the Academy has allowed over the years, wasn’t the 94th Oscars actually due for a moment like this?

The post You can’t stain something that’s already tarnished: A rebuttal of Harry Lennix’s column suggesting Will Smith return his Oscar appeared first on TheGrio.