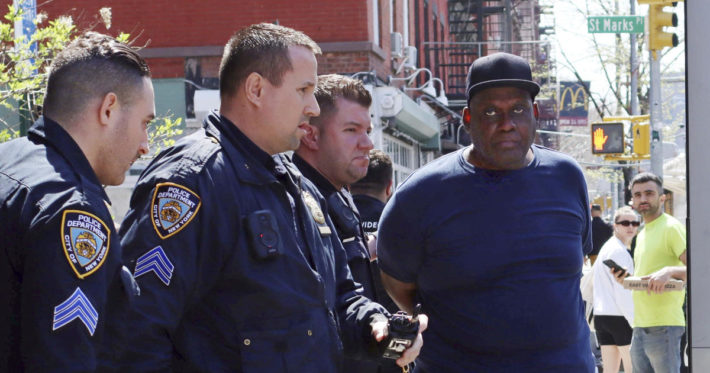 The smirking madman who turned a rush hour commute into a bloody terror when he opened fire in a crowded New York subway car called Crime Stoppers on himself Wednesday morning — then calmly went for an afternoon stroll through the East Village while he waited for police to come get him.

“A call came into Crime Stoppers … The guy says, ‘You know I think you’re looking for me. I’m seeing my picture all over the news and I’ll be around this McDonalds… I want to clear things up,’” law-enforcement sources told The Post of the bizarre moment Frank James called cops on himself.

“So the unit responds and he’s not at the McDonalds so they start driving around and see a man who fits the description. When they take him into custody they find his Wisconsin driver’s license.”

A couple of eagle-eyed New Yorkers also flagged down a pair of cops after they spotted James sauntering through the East Village, where he briefly sat down at an outdoor dining shed and charged his phone at a Link NYC hub.

The NYPD swooped in shortly after and put him into handcuffs.

“He didn’t fight, he didn’t do anything, he totally surrendered,” said Chikh.

Federal prosecutors wasted no time charging James, 62, with terror-related offenses for firing 33 rounds on a Manhattan-bound N train Tuesday morning, leaving 10 people with gunshot wounds and another 19 injured in a mass shooting that shocked an already rattled city that’s been reeling from a citywide crime surge.

They hit him with a charge of committing terrorist attacks and other violence against mass transportation systems, which could send him to prison for life if he’s convicted.

Police arrested James just before 2 p.m. on First Avenue and St. Mark’s Place and about two hours later, he was walked from the 9th Precinct, grinning as cops shoved him into a waiting police car.

He’s facing one felony charge for committing a terrorist attack against a mass transportation system and faces life in prison if convicted, Brooklyn federal prosecutors said.

“My fellow New Yorkers. We got him, we got him. I cannot thank the men and women of the New York City Police Department enough, as well as our federal agents, our state police, our first responders — from the 911 operators, to the various men and women from our medical professionals. We got him,” Mayor Eric Adams said at an afternoon press conference celebrating the arrest, more than 24 hours after the attack, and after a second rush hour of fear for commuters.

“I said to New Yorkers: We’re going to protect the people of this city and apprehend those who believe they can bring terror to everyday New Yorkers and I want to thank every day New Yorkers who called in tips, who responded, who helped those passengers who were injured. Thirty-three shots, but less than 30 hours later, we’re able to say we got him.”