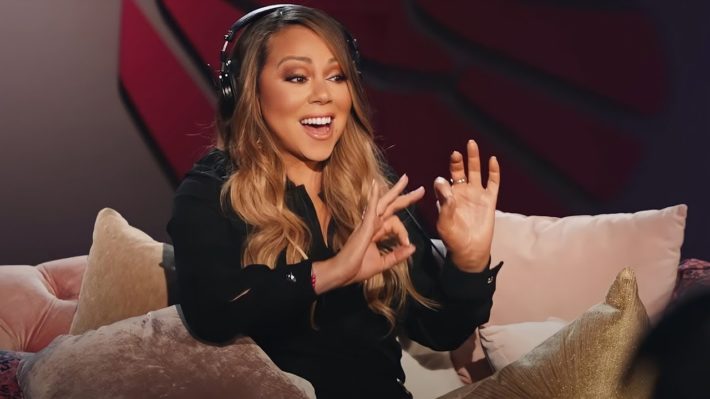 Mariah Carey is ready to pass the mic to fans as part of the icon’s new project with online platform MasterClass.

For those who channel the power of Mariah Carey in every aspect of their lives, Mimi is finally giving the Lamb-ily a look at her creative process. Carey has partnered with Masterclass for a nine-video online series, in which she shows writers how to take care of their voices, work around samples, and navigate the music industry. As part of her Masterclass, Carey has released a re-recording of one of her fan-favorite cuts, “The Roof,” this time, featuring singer Brandy.

“The Roof” was first released as a solo track on Carey’s 1997 Butterfly album. “The Roof” failed to chart in the US, but the song and its video remain a fan favorite.

In one of the Masterclass videos, Carey can be seen coaching Brandy throughout the process of arranging and recording the track.

“I’ve never let cameras in when I am creating — not when I’m writing, and especially not when I’m singing,” said Carey in a statement. “But now I’m taking MasterClass members into my studio to show them how they can write and produce music using their voice and become anything they want to be as long as they create, re-create, reimagine, and reinvent.”

The new version of the roof will be released exclusively with the Masterclass. Fans can access the Masterclass via a $15 monthly subscription to Masterclass, and can also take online lessons from Usher, St. Vincent, and Timbaland.

Some of the chapters for Carey’s Masterclass include “Writing With Samples,” “Producing With Your Voice,” “Taking Care of Your Voice,” “Surviving in the Music Industry,” and “Lyricism: Write About the Realness.”

“Mariah is simply a genius,” said David Rogier, founder and CEO of MasterClass, in a statement. “She’s one of the greatest artists of all time. In her class, Mariah is opening up her studio for the first time ever, teaching members how to use their voice throughout the music-making process, including in the studio and while navigating the industry.”

Check out the trailer for the Masterclass below.

The post Mariah Carey Reveals A Reimagined Fan Favorite With Brandy For Her Masterclass [Video] appeared first on LOVEBSCOTT.