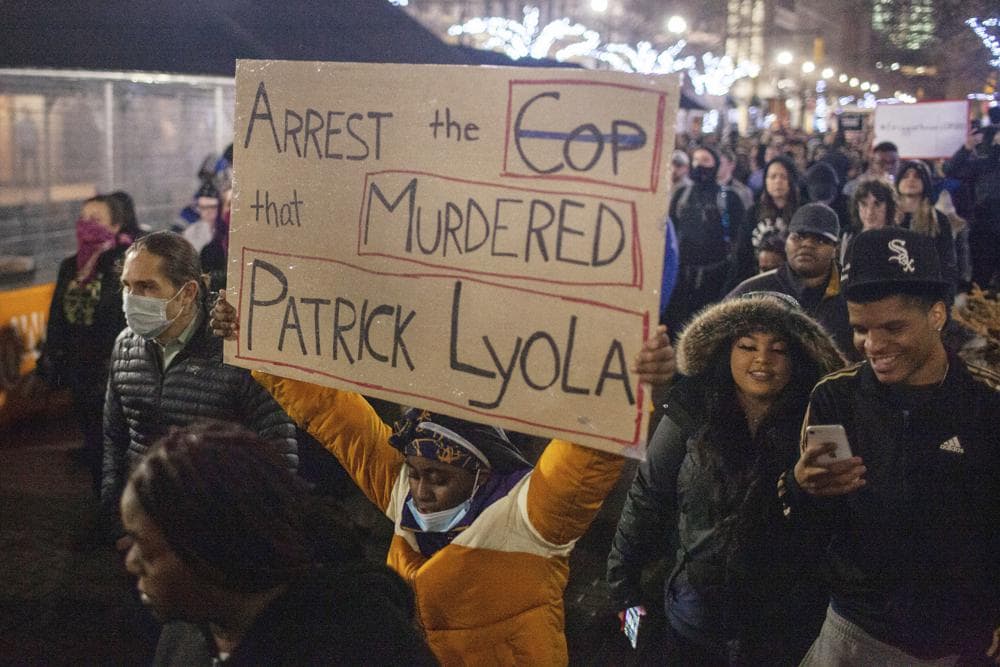 Patrick Lyoya, 26, was killed outside a house in Grand Rapids

A Black man facedown on the ground was fatally shot in the back of the head by a Michigan police officer, the violent climax of a traffic stop, brief foot chase and struggle over a stun gun, according to videos of the April 4 encounter.

Patrick Lyoya, 26, was killed outside a house in Grand Rapids. The white officer repeatedly ordered Lyoya to “let go” of his Taser, at one point demanding: “Drop the Taser!”

Citing a need for transparency, the city’s new police chief, Eric Winstrom, on Wednesday released four videos, including critical footage of the shooting recorded by a passenger in Lyoya’s car on that rainy morning.

“I view it as a tragedy. … It was a progression of sadness for me,” said Winstrom, a former high-ranking Chicago police commander who became Grand Rapids chief in March. The city of about 200,000 people is about 150 miles (240 kilometers) northwest of Detroit.

Video shows Lyoya running from the officer who stopped him for driving with a license plate that didn’t belong to the vehicle. They struggled in front of several homes while Lyoya’s passenger got out and watched.

Winstrom said the fight over the Taser lasted about 90 seconds. In the final moments, the officer was on top of Lyoya, kneeling on his back at times to subdue him.

“From my view of the video, Taser was deployed twice. Taser did not make contact,” Winstrom told reporters. “And Mr. Lyoya was shot in the head. However, that’s the only information that I have.”

The traffic stop was tense from the start. Video shows Lyoya, a native of Congo, getting out of the car before the officer approached. He ordered Lyoya to get back in the vehicle, but the man declined.

The officer asked him if he spoke English and demanded his driver’s license. The foot chase began soon after, video shows.

Winstrom didn’t identify the officer, a seven-year veteran who is on paid leave during the investigation.

“Me being from Chicago for the last 20 years, I’ve handled many police shootings myself, so I do have a lot of experience in this,” the chief said. “I was hoping to never have to utilize that experience here.”

Video was collected from Lyoya’s passenger, the officer’s body camera, the officer’s patrol car and a doorbell camera. Prosecutor Chris Becker, who will decide whether any charges are warranted, objected to the release but said Winstrom could act on his own.

“While the videos released today are an important piece of evidence, they are not all of the evidence,” he said.

The officer’s body camera was turned off before the shooting, which happens when a button is pushed for three seconds, Winstrom said. He said it appears it was deactivated unintentionally due to body pressure during the struggle, but he would not discuss any officer statements about it.

“That will come out once the investigation’s complete,” Winstrom said.

City Manager Mark Washington warned that the videos would lead to “expressions of shock, of anger and of pain.” Several hundred protesters gathered outside the Grand Rapids Police Department following the release of the videos, with some cursing and shouting from behind barricades. The group demanded that officials make public the name of the officer in the shooting.

Some businesses closed early Wednesday. Some boarded up windows. But the demonstration remained nonviolent.

“He arrived in the United States as a refugee with his family fleeing violence. He had his whole life ahead of him,” Whitmer, a Democrat, said.

Prominent civil rights attorney Ben Crump, speaking on behalf of Lyoya’s family, on Wednesday called for the officer to be fired and prosecuted.

“The video clearly shows that this was an unnecessary, excessive, and fatal use of force against an unarmed Black man who was confused by the encounter and terrified for his life,” Crump said in a release.

Crump and Lyoya’s family were expected to hold a news conference Thursday afternoon.

Winstrom last week said he met Lyoya’s father, Peter Lyoya, and that they both cried.

“I get it as a father. … It’s just heart-wrenching,” the chief told WOOD-TV.

As in many U.S. cities, Grand Rapids police have been occasionally criticized over the use of force, particularly against Black people, who make up 18% of the population.

In November, the Michigan Supreme Court heard arguments in a lawsuit over the practice of photographing and fingerprinting people who were never charged with a crime. Grand Rapids said the policy changed in 2015.