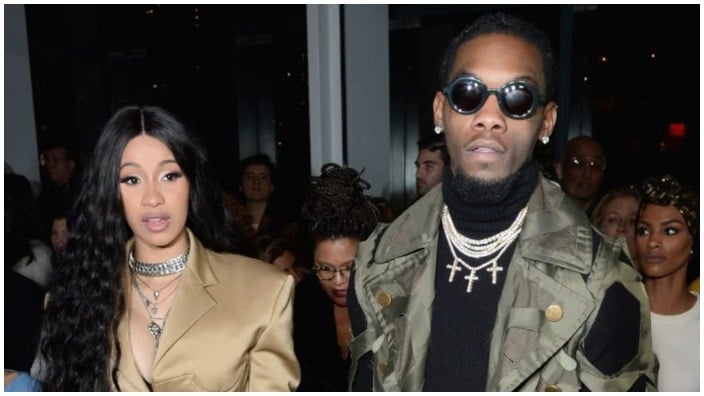 The cover features both hip-hop stars, their two children, and Offset’s three children from previous relationships

Seven months after the birth of their son, Cardi B and Offset have finally revealed their 7-month-old baby boy’s name and a pic of his face.

The couple and their children are featured in the May/June issue of ESSENCE Magazine. The cover features both hip-hop stars, their two children, and Offset’s three children from previous relationships.

The “WAP” rapper, 29, shared two photos of their son via Instagram on Thursday (April 14), but she didn’t reveal his name, only offering a hint with a “wave” emoji.  Offset, 30, followed up, sharing a photo of the couple’s baby in the bathtub wearing a silver chain necklace and diamond earrings. His caption revealed the boy’s name to be Wave Set Cephus.

Cardi first announced the birth of her son on Sept. 6 on Instagram. She tweeted Thursday that it was Offset who came up with the child’s unique name.

“When Set suggested Wave, I was sold! THAT HAD TO BE HIS NAME !” she wrote alongside a video showing a piece of custom-made jewelry of her son’s name.

Cardi and Offset wed in September 2017 and are parents to 3-year-old daughter Kulture. Offset is also a dad to daughter Kalea, 7, and sons Kody, 7, and Jordan, 12, from previous relationships.

“After we got married, that’s when I first met his kids,” Cardi tells Essence. “I always wanted them to love me, and they really do. They tell me that. I feel it, and I hope that we always have a great relationship.”

Offset added, “It’s a blessing to be able to have them all together, and to have a wife who’s open and treats them as if they’re her kids,” he said. “It could be an issue, but I don’t have to go through that, and that’s beautiful.”

Cardi admits she was hesitant to date a rapper when Offset first expressed interest in getting to know her more intimately.

“When my friend told me that he was trying to holler at me, I was like, ‘I’m not trying to deal with no industry rappers, because I already know what type of time they’re on,” Cardi tells the publication. “I was scared. I’m a relationship girl.”

Their first date was at Super Bowl LI back in 2017 and they ultimately tied the knot in the bedroom of Offset’s Atlanta home. Per the article, Cardi notes, “The smooth sailing wasn’t that smooth in the beginning.”

“I had a little luggage,” Offset admits, to which Cardi replies “And I had to unpack it.”