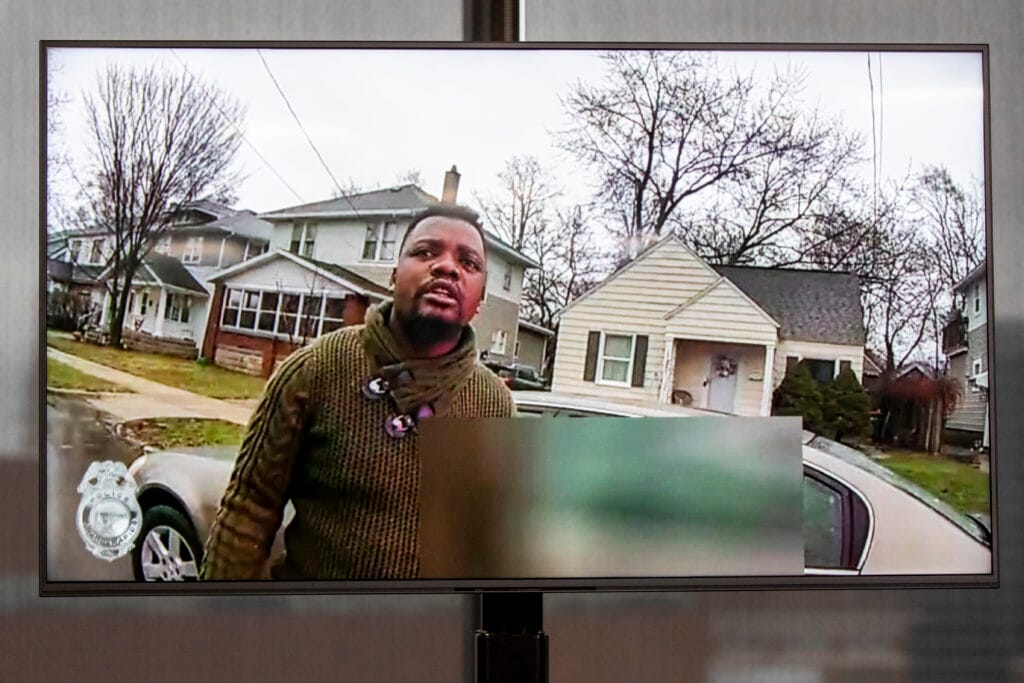 Body camera footage of Patrick Lyoya’s fatal encounter with a Michigan police officer shows a close-up view of an intense struggle, but the video goes dark 42 seconds before the officer shoots the Black man in the head.

It’s the latest high-profile case in which body cameras — touted as tools to hold police accountable — have failed, leaving prosecutors and the public to rely on bystander video for a clearer picture of what happened.

One expert said vendors could make changes to avoid accidental camera deactivations, though it’s not clear that is what happened in Lyoya’s case, and some activists said an accident seems unlikely. Regardless, Lyoya’s family and their attorneys say it shows the importance of citizen video. The shooting was captured by Lyoya’s passenger, with a cellphone, and a doorbell camera across the street.

“Keep videoing the police because transparency is important for them and it’s sure important for us,” said Ben Crump, an attorney for Lyoya’s family.

The officer was on top of Lyoya, who was facedown on the ground, when he shot the 26-year-old Congolese refugee in the head April 4.

Body camera video released by police this week shows the initial stop, and the officer saying the car’s license plate wasn’t registered to the vehicle. It shows Lyoya’s attempt to run away and a struggle as the officer repeatedly tells him to stop. At one point, Lyoya has his hand on the officer’s stun gun, and the officer yells at him to let go.

The video then goes black. Police dashcam captured some audio but no images of the shooting.

Grand Rapids Police Chief Eric Winstrom said officers have to hold a button on the camera for three seconds to turn it off. He said the button was hit many times during the struggle in this case, but at the point the screen went dark “that was the first moment that it was held down for more than three seconds. That’s what deactivated it.”

One body camera expert said it appeared to have been unintentional.

“That officer, he is in a full-on struggle with that citizen. And I’m sure turning the camera off would’ve been the least of his concerns,” said Michael White, a professor at the School of Criminology and Criminal Justice at Arizona State University and co-director of training and technical assistance for the U.S. Department of Justice Body-Worn Camera Policy and Implementation Program.

White couldn’t think of another case in which an officer’s camera was unintentionally turned off during a struggle, but he said cameras are sometimes knocked off officers’ uniforms.

The Axon Body 3 camera used by Grand Rapids police has a large circular button on the front surrounded by a ridge, so the button is slightly recessed. Officers tap the button twice to record and hold it down for three seconds to turn it off.

Axon said it remains “committed to developing technology and training for public safety” but declined to comment further, citing the investigation.

Michelle Gross, a Minnesota activist for police accountability and president of Communities United Against Police Brutality, was among those who doubted that the officer’s camera was accidentally turned off, citing the recessed button.

An expert in police accountability issues agreed. Sam Walker, a retired professor at the University of Nebraska Omaha, called the camera’s deactivation “suspicious” and said it must be investigated.

In the May 2020 killing of George Floyd, bystander video was crucial in bringing attention to and documenting what happened. In that case, Derek Chauvin’s body camera fell off as he and other Minneapolis police officers struggled with Floyd, who was Black. Video recorded by a teenage bystander, as well as the other officers’ body cameras, was key in convicting Chauvin of murder.

During the 2019 arrest of Elijah McClain, a Black man who died after officers confronted him in suburban Denver, the body cameras of all three officers came off during a struggle. The cameras continued to record audio but there was no video footage to verify a police claim that McClain reached for one of the officers’ guns. He was placed in a chokehold and paramedics injected him with the powerful sedative ketamine. He later died at a hospital.

Sometimes officers intentionally turn off the cameras. In the 2019 beating and death of Ronald Greene, another Black man, Louisiana Master Trooper Chris Hollingsworth turned his body camera off during a car chase. It was one of several policy violations for which he was ultimately fired.

White said some body camera models have means to prevent accidental deactivation, such as needing to press a button three times. He said if it is deemed that the camera worn by the officer in Lyoya’s death was accidentally deactivated, he wouldn’t be surprised if major vendors begin working on modifications, such as additional manual mechanisms or voice activation. He said companies have developed solutions to prevent body-worn cameras from being knocked off, such as stronger magnets.

Ayesha Bell Hardaway, an associate professor of law at Case Western Reserve University and co-director of the school’s Social Justice Institute, said the lack of video in use-of-force cases can affect whether officers are charged. Without direct evidence such as video, prosecutors must rely on the reasonable-officer standard in bringing charges, examining whether a reasonable officer would have believed his or her life or the lives of others to be in danger.

“The absence of the video at the critical moment gives us no window to put us in that moment,” she said. “It now puts us right back where we were — relying on the word of an officer.”

“I shudder to think of the lack of accountability that exists in a world without this technology,” she said.