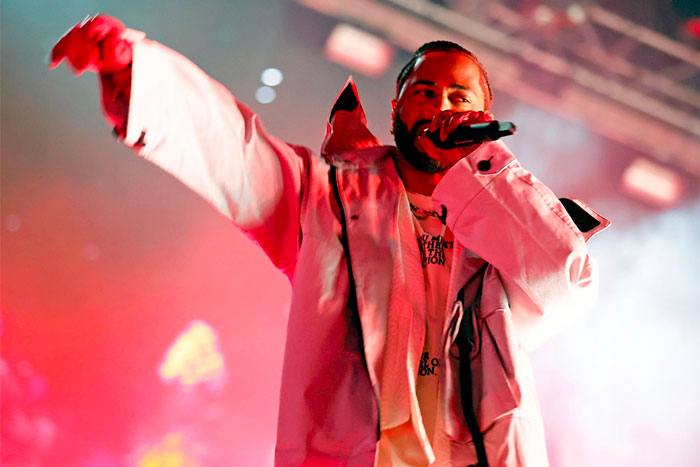 Big Sean also hit the Coachella stage bringing out a crowd that according to TMZ rivaled the stage of the Friday night headliner Harry Styles.

Two years after the festival was canceled in the wake of the pandemic, Big Sean made his long-awaited Coachella debut with a stellar set in Indio, Calif., on Friday (April 15).

His 45-minute performance at the Sahara tent, one of the highlights of Day 1, opened with “Paradise” before continuing with his standout verses from “Mercy” and “Clique” during which he shouted out Kanye West and the whole G.O.O.D. Music crew.

“To go to performing for 15 people, not knowing who the f**k I am, to all the way performing for Coachella for you tonight, this shit is a dream come true,” the Detroit rapper said as he reflected on his journey from recording songs in Mike Posner’s mother’s basement.

The crowd, which spilled far beyond the Sahara tent, went wild when YG hit the stage for “Big Bank.” Later, Jhené Aiko joined her boyfriend for their collaborations “Beware” and “I Know.” The TWENTY88 duo put their real life chemistry on display as they cozied up on stage.

In addition to fan favorites like “Dance (A$$)” and “Blessed,” Sean Don debuted a new song called “Find the Light,” which he was working on up until the night before.

He took it back to 2011 with his first Finally Famous single “My Last” before closing with “I Don’t F**k With You” and “Bounce Back” while the crowd sang along to every word.

Sean’s Coachella set may be just the inspiration he needs to go back on the road. “Now I wanna go on tour,” he tweeted after Friday’s show.

Now I wanna go on tour ?